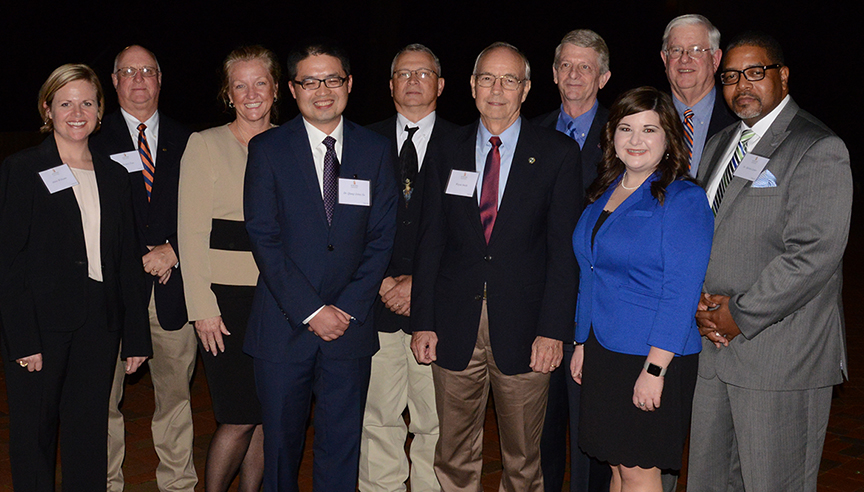 AUBURN, Ala.—Ten successful professionals who hold academic degrees from Auburn University’s College of Agriculture have been selected as the college’s most outstanding alumni for 2017.

The 10, who will be honored in an awards ceremony Feb. 8 in Auburn, include the recipient of the 2017 Alumni Service Award and nine Alumni Award winners who were chosen by and represent the academic units and programs from which they earned their degrees.

Ennis, who graduated from Auburn with a B.S. degree in Poultry Science in 1983, is CEO of the nonprofit World Poultry Foundation and former president, COO, CEO and Global Business Development director of Huntsville-based Aviagen, the world’s leading poultry breeding company. He has served as president of the Alabama Poultry and Egg Association since 2013.

Throughout his exceptional career, Ennis has been a strong supporter of and advocate for the College of Agriculture. In addition to mentoring Auburn agriculture students, speaking at special events and helping recruit new students, he chairs the college’s “Because This is Auburn” fundraising campaign and is a member of both the Poultry Research Farm Relocation Committee and the planning committee for a new, state-of-the-art poultry-processing facility north of Auburn’s main campus.

Williams (B.S., ’02, Rural Sociology) initially returned to her native Marengo County to work on the family dairy farm after graduating from Auburn but returned to the community in 2006 to pursue a career in real estate. Today, she is a top-performing Realtor and associate broker with Berkshire Hathaway HomeServices Preferred Real Estate.

Frazier (B.S., ’84, Animal and Dairy Science) of Montgomery graduated from Auburn’s College of Veterinary Medicine in 1988 and worked in private practice until 1995, when he joined the Alabama Department of Agriculture and Industries’ Animal Industries Division as veterinary medical officer. He now is in his 16th year as division director and state veterinarian.

Stephens (B.S., ’73, Agricultural Engineering) is a registered professional engineer in Alabama, Florida and Georgia and is a principal and the senior vice president of Dothan-based Polyengineering Inc., where he has been employed since 1975. Over the course of his career, he has planned, designed, permitted and managed water and wastewater construction projects totaling more than $80 million.

Smith (M.S., ’71, Agronomy and Soils) is a nationally and internationally respected cotton breeder and geneticist who joined Texas A&M University’s Department of Soil and Crop Sciences as a professor in 1986 after 12 years on the faculty at the University of Arkansas. Today, he also serves as associate department head.

As an associate professor in the Department of Biology at Abilene Christian University, Xu (Ph.D., ’07, Entomology) has built upon and expanded the doctoral research he conducted at Auburn, which focused on investigating the molecular mechanisms behind pesticide resistance in mosquitoes. In his nine years on the ACU faculty, he has developed an exemplary research program and is a highly respected teacher.

Smith (B.S., ’91, Horticulture) has spent her entire career with Disney, from her first job as a gardener in Disney World’s horticulture division in 1992 to her current position as general manager of the Walt Disney Company’s Global Pest Management Initiatives, a role in which she oversees all pest management issues in the company’s theme parks in Florida, California, Paris, Hong Kong and Shanghai.

Tucker (M.S., ’76, Fisheries; Ph.D., ’78, Microbiology) retired from a distinguished 32-year career as an aquaculture research professor at Mississippi State University in 2012 and since that time has served as research leader at the USDA–Agricultural Research Service’s Warmwater Aquaculture Research Unit in Stoneville, Mississippi. His work, especially in water quality management and second-generation pond-production systems, has had a major impact on the aquaculture industry.

Himburg (B.S., ’08, Agricultural Communications) started her career in Indiana as a farm marketer with Cargill but in 2012 returned to her native Alabama as director of the Alabama Farmers Federation’s Young Farmers Division. In that role, she coordinates leadership training and programs for young farm families around the state. She also mentors the Auburn University Young Farmers organization and promotes agricultural education in schools.