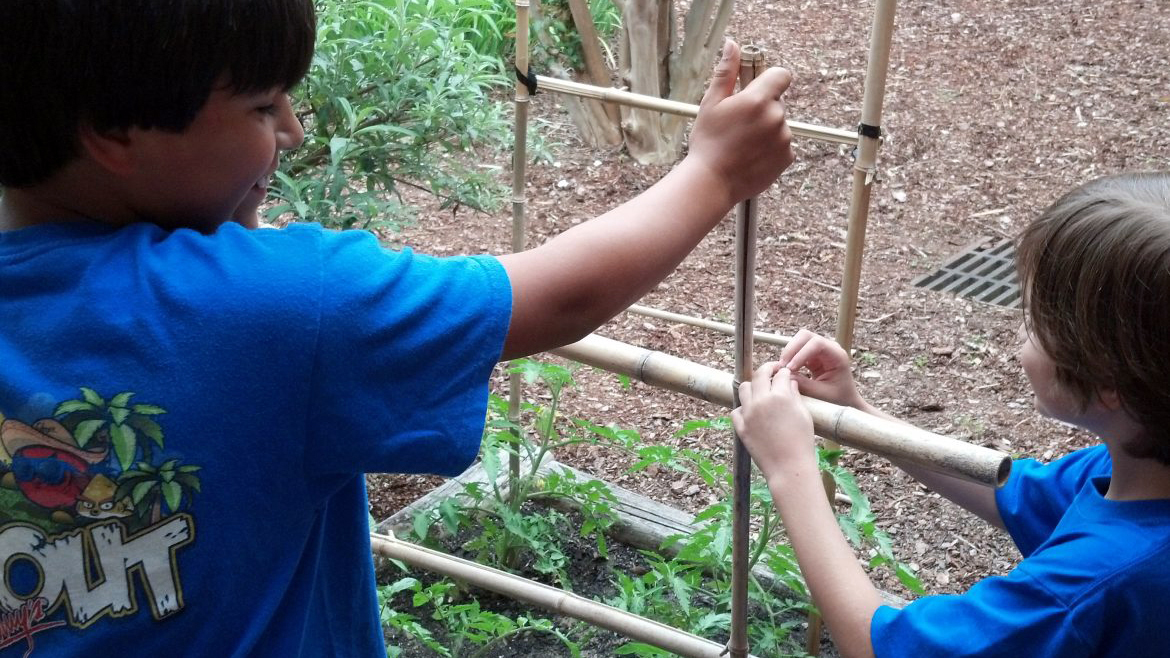 The College of Agriculture’s Department of Horticulture is giving back to the community by helping educate Opelika elementary students on gardening practices and at the same time addressing food insecurity in impoverished Opelika communities.

This project, called O Grows, focuses on making local produce available and accessible through a variety of food programs, including gardens at six Opelika City Schools, the Opelika Community Garden and the Opelika Farmers Market. Produce from the schools and community garden is donated to the Community Market of the East Alabama Food Bank, with more than 20,000 pounds of produce being donated since 2012.

Daniel Wells, assistant professor of horticulture, is working with the founder of O Grows, College of Education professor Sean Forbes, to ensure students get the most out of their gardens—both in terms of produce and in the quality of education they receive

“I have consulted with (Forbes) on his growing methods and what types of crops might work best for his situations,” Wells said. “I think O Grows is a great project, and I would like to work with Sean more in the future.”

Forbes and Wells also are interested in developing a project that focuses on using aquaponics (using water to grow both produce and fish—one of Wells’ research areas—to help diminish food insecurity in low-income neighborhoods like Carter and Jeter in Opelika. They have just begun discussions and are planning to seek funding for this project next year.

The Auburn University student Horticulture Club also has contributed to the design and construction of the community and school gardens, along with other College of Agriculture undergraduates who get valuable hands-on experience and earn service-learning hours.

Forbes founded O Grows in 2012 at Southview Primary School in Opelika because he wanted a clever way to spend more time with his son while also educating other kids about growing food.

“The school garden spread to six (schools), then it spread to the Community Garden, then to the farmers market,” Forbes said. “It started just with exposing kids to the gardens…teaching them that their food does not ‘come from’ the grocery store, and then we realized (school and community) are so connected.”

The 10,000-square-foot community garden is on the grounds of the Southside Center for the Arts (formerly known as the Miriam Brown School), which is located at the intersection of the Carter and Jeter communities in Opelika. According to the U.S. Census 2010, these two neighborhoods have long been among the most vulnerable to food insecurity in Lee County. Forbes says the community garden is part of solution, offering a financially feasible opportunity for low-income residents to put more fruits and vegetables on the table.

Garden plots are available for Carver and Jeter residents through a free, first-come-first-serve signup. Plots also are available for other area residents for a nominal fee. Irrigation, fertilizers and pest control are provided, and O Grows staff and volunteers are on-hand every weekend to assist gardeners.

The Opelika Farmers Market, which O Grows began managing in 2016, also is located in the Southside Center in the property adjacent to the community garden. From mid-May until the end of August, about 15 farmers come each week from within 100 miles of Opelika and give residents of surrounding communities access to a variety of nutritious foods.

However, the impact of these efforts has not yet been as significant as he would like as related to improving the quality of life for low-income residents because of the small number of residents involved. Forbes is seeking a federal grant to help organize a community food summit that would further engage members of the Carter and Jeter neighborhoods, specifically, as well as influential community members and university faculty.

The purpose of the summit would be to develop a long-term food project plan that would provide a “blueprint” for increased, long-term community food security and sovereignty, Forbes said.