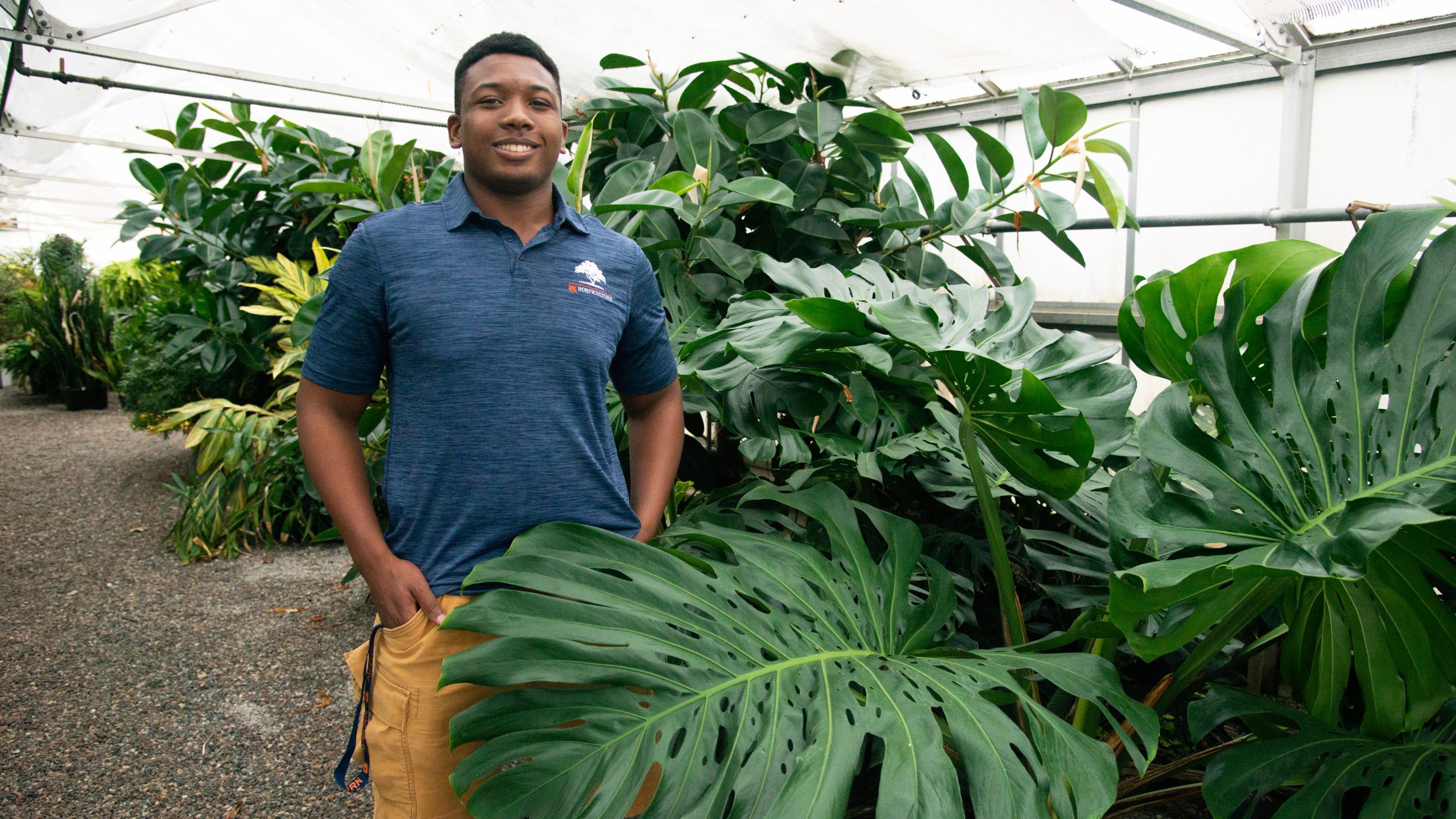 In landscape architecture, purpose works itself out in multiple ways. A designer carefully chooses plants and trees for their size, color, texture and suitability to their environment, then arranges them in the soil in relation to buildings and other structures. These elements welcome people into the space and enhance their quality of life.

Purpose is evident on Auburn’s campus, not only in its tree-lined walks and green spaces, but in students like Johnathan Hampton. This junior horticulture major represents the College of Agriculture as an Ag Ambassador, and is one reason why so many prospective students immediately feel welcome at the school. He’s passionate about landscape design and presenting a fuller understanding of what agriculture is.

Johnathan’s interest in horticulture originated during his childhood in Huntsville, perhaps around the time he first purchased a soybean growing kit at his elementary school’s book fair. “Every year, I’d order this kit and practice growing soybeans,” Johnathan said. “Of course, I killed about 80 percent of the stuff I tried to grow. But it didn’t matter. I was fascinated to see nature grow and develop.”

Unfortunately, Huntsville had largely neglected its agricultural heritage in favor of engineering, and schools there didn’t offer 4-H or other programs for students interested in agriculture. The same was true when Johnathan’s family moved to Madison. So Johnathan created his own learning opportunities.

“Through high school I had to find ways to pursue my interests in those areas,” he said. “My sophomore year, I started a landscaping business and continued it until I left for college. I did everything from yard maintenance to small-scale design work. I got a chance to beautify our neighborhood’s front entrance and to design a neighbor’s backyard space.”

Before Johnathan had a driver’s license, his father, John, drove him around the neighborhood and helped distribute business flyers.

“My wife and I wondered where Johnathan’s love for horticulture came from,” John Hampton said. “His mother’s not a big outdoorsy person. I am a little bit, but not to the extreme that Johnathan is. We saw it in him at an early age. I think he got it from my dad, who loves the outdoors. My wife’s grandmother loved the outdoors as well. So that passion for agriculture was passed down from them to Johnathan — and put on steroids, I guess.”

By his senior year, Johnathan had gained further knowledge working at a local nursery. “These hands-on experiences helped solidify what I already felt. So when I graduated, I knew that I wanted to go into horticulture,” Johnathan said.

After researching degree programs, Johnathan narrowed his university choices to Mississippi State, Clemson and Auburn. He knew he’d found the right school when he toured Auburn.

“The atmosphere and ambience of the town and the college really stuck out to me,” he said. “The College of Agriculture is one of the smaller colleges within Auburn and has more of a family feel. It seems like everyone knows and looks out for each other and is happy to be there. And it really shows how students are treated and invited in.”

The welcoming atmosphere that Johnathan experienced as a freshman is what later prompted him to become an Ag Ambassador.

In his pre-landscape architecture program, Johnathan is gaining technical skills from across the discipline, including construction and soil science.

“One of the biggest things I enjoy is plant ID,” he said. “I’ve already taken one ID course called Small Trees, Shrubs and Vines. Having the knowledge of some of the plants already, I absolutely loved it. The course helps you connect the dots and realize, ‘Oh, I finally understand what that is.’”

Johnathan is also getting valuable experience as a member of the Auburn University Landscape and Nursery Association. He said that traveling with the club to Mobile and attending the Gulf States Horticultural Exposition was a highlight of his college career so far.

“Basically, it’s an entire congregation of agriculture industry professionals,” he said. “You have masonry experts, plant wholesalers, people who specialize in annuals or perennials or breeding new cultivars. You also have leaders of horticulture organizations from around the country. So it was a huge deal to go and meet people and make connections.”

Of course, the trade show is where the school’s Landscape and Nursery Association acquires donations for its annual plant sale, which helps fund members’ participation in the annual National Collegiate Landscape Competition (NCLC). Johnathan was preparing for the 2020 NCLC back in March when it was canceled due to COVID-19. Despite his initial disappointment, he believes the training was worthwhile.

“Before the event got canceled, my team partner and I were preparing to compete in annual and perennial ID and compact excavator operations,” Johnathan said. “We had over 150 plants we had to know for the ID competition. It was a fun and enriching experience, even though we weren’t able to go. We hope we’ll get to compete this year.”

His plans to earn his master’s in landscape architecture and research plant cultivars are just two of his professional goals. Currently minoring in Spanish and conversant in French, Johnathan hopes to eventually return to Europe, which he visited on an educational trip in 2018.

“If I could combine the two languages with landscape design in a study abroad program, that would be awesome,” he said. “I also plan to work for some U.S. design companies here after getting certified in landscape architecture. Somewhere in the future, I’d like to start my own design firm and maybe do something on the greenhouse production side.”

He most looks forward to designing landscapes — and influencing people in positive ways. “I want to design public spaces, parks and residential areas, because they have such a huge effect on how people perceive a space, even if they don’t realize it,” he said. “Before you even enter a house or a college building, the first thing you see is the outdoor environment. It plays a central role in how people feel there. Being able to lighten somebody’s mood or make them excited just from the landscape is something that’s exciting to me.”

But Johnathan also foresees challenges in the horticulture industry, many of them due to a lack of public education programs. “A lot of clubs like 4-H aren’t offered unless you’re in county schools,” he said. “In city schools, you have little to no hope of pursuing anything that’s agriculture related. And there aren’t many programs outside of school for students.”

As a result, many young people grow up equating agriculture with farming. “People see agriculture as something that’s not a STEM field, when it actually falls into multiple STEM categories. So changing public perception of agriculture is a big challenge.”

Another consequence of not teaching agriculture in city schools is that minorities are underrepresented in the field.

“It’s true, there’s not much diversity in agriculture,” Johnathan said. “Depending on which classes I take, I’m often the only minority in the room. Sometimes you feel like you have more to prove, that you have to live up to certain expectations. I don’t see it as a negative situation, but as an opportunity. If people doubt or don’t believe in you, you have the opportunity to prove them wrong, to keep moving, stay focused and know why you’re doing what you’re doing.”

Johnathan credits his parents, John and Vananda, for their encouragement and instilling in him a sense of vision and faith in God.

“One scripture that my dad always told me is, ‘Without a vision, the people perish,’” he said. “If you don’t have a sense of purpose, then you’re going to have a rough time. Regardless of the situation, you must remember why you’re there, and stay true to who you really are.”

Although Mr. and Mrs. Hampton live more than three hours from Auburn, they remain fully invested in Johnathan and his education.

“We can’t be there to see everything Johnathan does,” John said. “But one of the biggest ways that my wife and I support him is by keeping those lines of communication open—calling him, visiting him, letting him know that if he ever has a need or a personal issue that we’re still his support system.”

Johnathan also acknowledges his career advisor, Andrew Morrison, who wrote letters of recommendation that landed Johnathan scholarships and a recent internship with Medxcel.

“God has given me the gift to be able to do and experience these things, and to go higher and pursue greater things,” Johnathan said. “To see things I’ve been working on since high school starting to pay off is a huge deal. It’s really exciting to be here as an advocate for the College of Agriculture, to share my story with people and hopefully to inspire other students to pursue horticulture.” 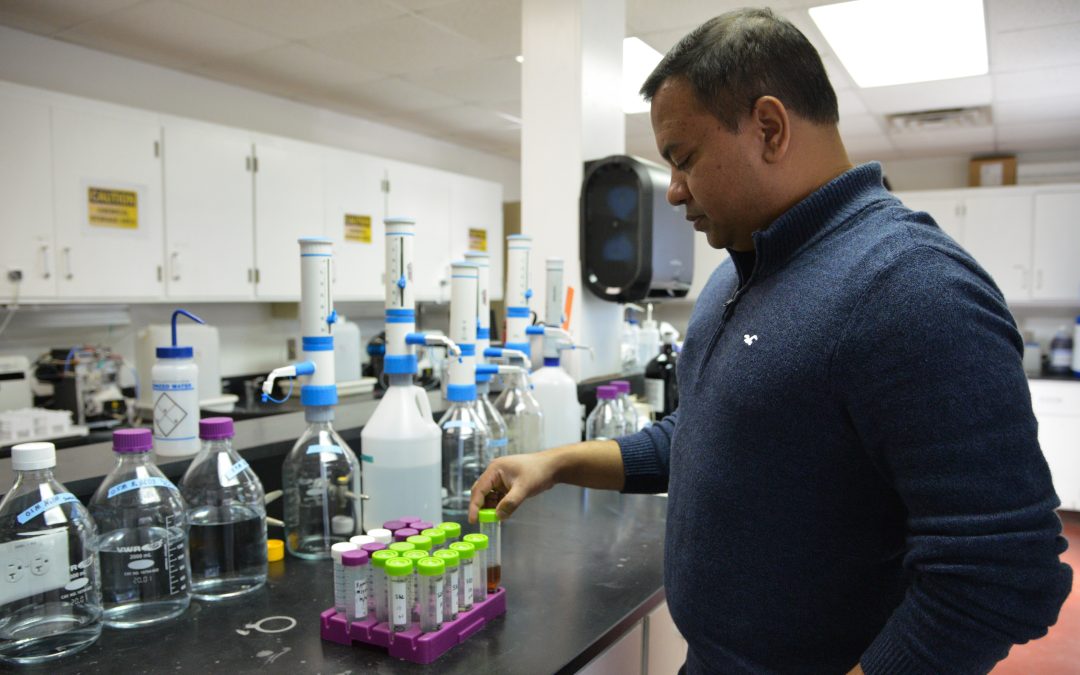