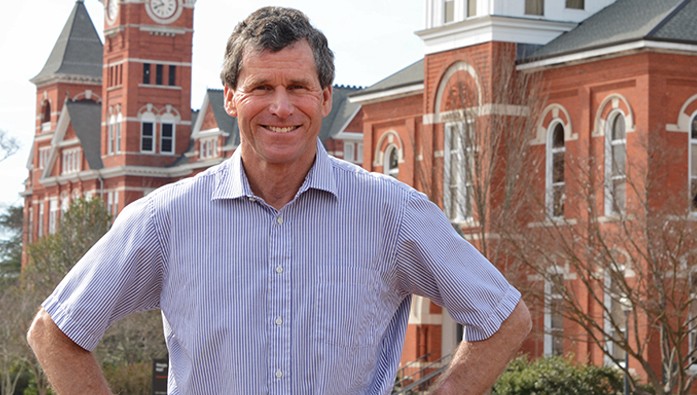 For the past four years, Auburn horticulture professor Gary Keever has played an integral role in efforts to evaluate, save, remove and replace the iconic Toomer’s oaks.

From among 9,000 mature live oaks that are growing on a South Carolina tree plantation that encompasses five times more acreage than Auburn University’s main campus, three tree scouts tied neon-orange surveyor’s tape on five. The five finalists, if you will.

From that five came two. The two—the two, 35-foot-tall live oaks that, on Feb. 14, will begin adjusting to their new home and their new role as the Auburn oaks at Toomer’s Corner.

Four years and two months after a frenzied ’Bama fan decided to avenge the Tide’s 2010 Iron Bowl loss to the Auburn Tigers by lethally poisoning the hallowed Toomer’s oaks, a new tree-rolling, victory-celebrating era will begin in The Loveliest Village.

Gary Keever, the Dr. Thomas H. Dodd Endowed Professor in the College of Agriculture’s Department of Horticulture, believes it’s definitely time to fill the space at the downtown intersection of College and Magnolia where the two original oaks stood for almost 80 years before being removed in April 2013.

“We found out in early 2011 that Spike 80DF, one of the most potent herbicides on the market, had been applied to the oaks at Toomer’s Corner,” Keever says. “Four years is long enough for this chapter in Auburn’s history to go on.

“Planting the new trees will make the corner whole again,” he says. “It will bring closure.”

Keever is the man to quote, not because he’s on the horticulture faculty or a member of the university’s Tree Preservation Committee or landscape consultant to Facilities Management, but because, for a good two and a half years, he was the official Auburn University spokesman on all things related to the poisoned and dying Toomer’s oaks. From the day the world learned of the malicious act, through the all-out efforts to remediate the tainted soil and save the trees, to the oaks’ removal, Keever was the voice of Auburn.

It made sense, then, that he was part of the scouting crew charged with identifying candidate trees worthy of filling the empty spaces that were left following the removal of the two victimized oaks. Joining Keever on the search committee were Auburn campus planner Ben Burmester and Birmingham landscape architect Tommy Holcombe, whose firm designed and is overseeing the redevelopment of Toomer’s Corner and Samford Park.

The plantation from whence the new Auburn oaks are being harvested encompasses 10,000 acres and was established around the year 2000 by a developer intent on producing trees to use in landscaping his new building projects. When the developer went bankrupt, the Virginia-based packaging company MeadWestvaco Corp. purchased the plantation.

In addition to the 9,000 live oaks that the original owner planted in 2002, the nursery has thousands of crape myrtles, large hollies and overcup oaks—the alternative species Auburn administrators considered planting at Toomer’s Corner—as well as several hundred maples. The task of selecting a handful of candidate trees from among the thousands would qualify as a classic illustration of the proverbial needle in a haystack.

Keever says he, Burmester and Holcombe did have several criteria the chosen trees had to meet.

“They had to be large, for instance, and they either had to already be limbed up or could be limbed up without changing the structure,” Keever says.

But subjectivity played a role, too.

Auburn horticulture professor Gary Keever examines a side shoot growing from the downed trunk of the original College Street oak at Toomer’s Corner. After two years of pulling out all stops to rescue the tree and its Magnolia Avenue counterpart from death by poisoning, Keever and others watched on April 23, 2013, as the two treasured oaks at Toomer’s Corner were cut down.

“For me, it was more a visual thing, more the ‘feel’ I got from the trees,” he says. “I looked at the space where they’ll be planted, and my question was, will they have an immediate impact.”

On the first pass through the nursery, the team “tagged a ton” of live and overcup oaks, but in the end, bright-orange surveyor’s tape marked five live and three overcup oaks as finalists. The final decision to go with live oaks and the final say on which two of the five live oaks would be Auburn’s were made at a higher level, Keever says.

The two trees that soon will be known as the Auburn oaks are 35 feet tall with 35-foot spreads. When dug with a hydraulic tree spade, the trees will have root balls that are 104 inches across and 6 feet deep. The trees will be transported to Auburn on tractor-trailer rigs. On Feb. 14, the new live oaks will be planted 12 feet back from the College and Magnolia curbs and above modular, underground structural system known as Silva Cells, which are designed to support large tree growth while reducing soil compaction and providing stormwater management.

Keever will be among those closely monitoring the trees in their new home.

“Transplanting is extremely stressful on trees,” he says. “We’ll be keeping close check on the nutrition and water levels, on leaf drop, and when new growth starts appearing, how much new growth and how big the new leaves are so we can spot any signs of possible decline.”

After two and a half years as the local, state and national news media’s go-to man on the latest on the Toomer’s oaks poisoning, Keever says it’s a relief—sort of—to be on the sidelines.

“I know I won’t always be called upon to give my advice or recommendations on matters, but I’ll be here if I’m needed, because I’ll always have a spiritual connection to the trees,” Keever says. “I’m truly glad I’m still part of it, because I care.”

VIDEO: Learn more from Keever about all that went into choosing the trees that will welcome generations of visitors to the Auburn University campus.

Wheeler Foshee, associate professor in the Department of Horticulture at Auburn University, was recently recognized by the North American Colleges and Teachers of Agriculture (NACTA) with the annual Educator Award. This national award recognizes those individuals...

Unique ‘vertical’ farms part of planned 16-acre Transformation Garden on campus Recycled shipping containers have gained popularity in recent years, being converted into everything from houses to small stores—but the Auburn University College of Agriculture, in...