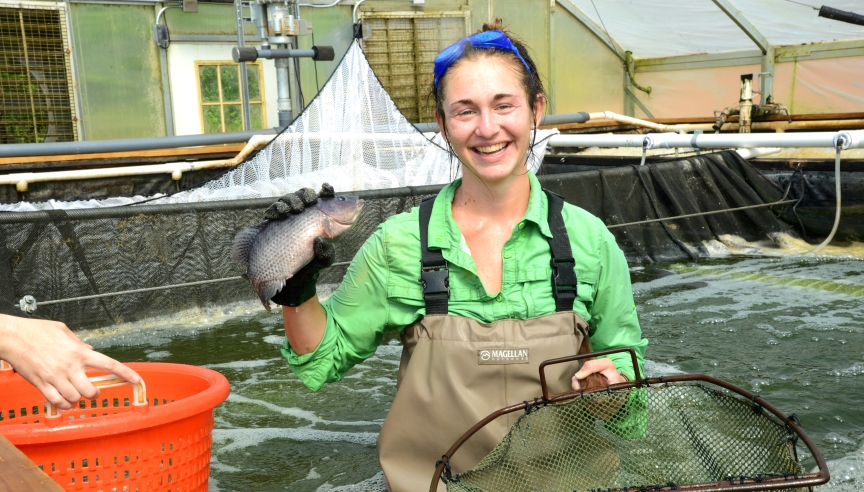 Evie Smith, a College of Agriculture senior who will graduate in December with bachelor’s degrees in both agronomy and soils and horticulture, helps sort fish in a tilapia tank at the E.W. Shell Fisheries Research Center. As an Auburn undergraduate research fellow, Smith is assisting in an aquaponics project in which wastewater from the tilapia tank is used to irrigate a cucumber crop growing in a nearby greenhouse.

Nothing against animals, mind you; she’d simply come to realize that she wanted to spend her life helping people, instead of people’s pets. Nothing against molecular biology, either, because, after all, she is a self-declared science nerd.

“I love, love, love science,” the freshman-looking-for-a-major told counselors in Auburn’s Career Center, “but I also love, love, love being outside. I could not stand working in a lab or an office all day.”

So, to recap: She was looking for a science-intensive degree program that would equip her with the knowledge and skills to make a difference in impoverished communities around the world, all while working in the great outdoors.

Ah, the career counselors said, then you might want to check out the Department of Crop, Soil and Environmental Sciences, over in the College of Agriculture. And sure enough, that fit. Like a glove.

“Agronomy and soils was the perfect combination of those three things,” Smith says.

By the middle of that spring semester 2013, the Roswell, Georgia, native had changed her major to agronomy and soils/production, and Auburn agriculture had added to its numbers a live wire. A ball of fire. A high achiever who approaches every day as an adventure, with an exclamation point.

Shortly after she completed her freshman year, Smith traveled to El Salvador on a mission trip in July and wound up staying till December, and that strengthened her resolve to devote her career to the impoverished of the world. She resumed her studies at Auburn in January, but at the end of spring semester 2014, she returned to the small, densely populated Central American country and spent another two months there.

During that second summer in El Salvador, Smith planted a garden at the missionary base where she was living and began to teach the people there about gardening. That’s when it dawned on her.

“I suddenly realized that, although my agronomy classes were helpful and wonderful, I also needed to learn how to grow horticultural crops to be more helpful to the people that I will be working with in the future,” she says.

She returned to Auburn that fall semester a double major, and this December, she’ll graduate with a bachelor’s degree in agronomy and soils and a bachelor’s in horticulture. But that’s getting slightly ahead of the story.

As noted earlier, Smith is a full-speed-ahead kind of young lady and apparently always has been.

“My mom’s a librarian, my dad’s a computer programmer and my brother is getting a Ph.D. in English,” she says. “And then—ta da—there’s me.

“My family,” she says, “would describe me as very enthusiastic and energetic.”

So would Daniel Wells.

“Evie’s an impressive young lady whose positive attitude and enthusiasm are infectious,” the Department of Horticulture assistant professor says. “She’s passionate about agriculture and helping others. She consistently challenges herself and strives to do her very best. And she’s a hard worker who isn’t scared of hard labor.”

Wells, whose research interests include aquaponics, first met Smith about a year ago at the E.W. Shell Fisheries Research Center in north Auburn, where his scientific experiments on integrated fish–plant production systems are based. In the aquaponics system at the Shell Center, the effluent from a tilapia tank is pumped into a greenhouse and used to irrigate horticultural food crops growing there.

Prompted by an intense, new-found interest in aquaponics, Smith—who already was interning with the crop, soil and environmental sciences department’s East Alabama Food Bank Garden—started volunteering to help with Wells’ research in any capacity, willing to take on even the most menial of tasks just for the chance to learn. Wells was impressed and soon had enlisted her as an undergraduate researcher.

For fall semester 2016, Smith has been awarded an Undergraduate Research Fellowship at Auburn to continue her research, which focuses on studying the effects of planting density and soil-less planting media on cucumbers grown in the aquaponics greenhouse.

And she’s found that so rewarding that, after graduating in December, she plans to enter a Master of Aquaculture degree program in Auburn’s School of Fisheries, Aquaculture and Aquatic Sciences. That program calls for a year of classes followed by a semester-long internship, which she plans to spend working with ECHO, a nonprofit, Florida-based organization focused on ending world hunger.

And then, the world is her oyster.

“I know where I want to go in life, and my Auburn education and the internship will take me there,” Smith says.

“I consider Evie one of our best students in the College of Agriculture,” he says. “I’m expecting big things from her in the future.”