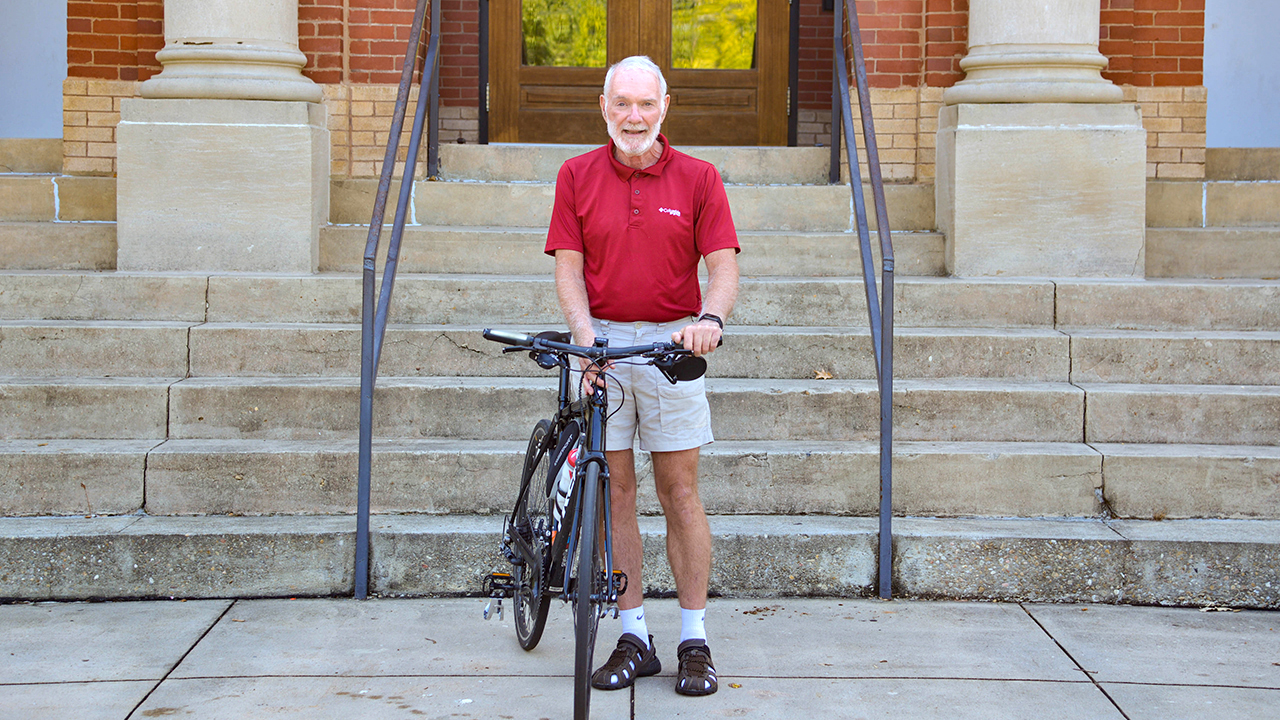 Five and a half months ago, a team of medical specialists came to a grim conclusion: If the comatose patient in UAB Hospital’s neuroscience intensive care unit didn’t die, he would spend the rest of his mentally impaired life in a nursing home.

But 11 days after he had been admitted, as nurses were sponge-bathing him, the patient came to.

“I woke up and saw my sister standing off to the side and said, ‘Ellen! You’re here!’” Auburn horticulture professor Raymond Kessler recalled. ‘But wait; what am I doing here?’”

Good question, with an answer that the cycling enthusiast found almost unbelievable. As wife Teresa patiently recounted, on Saturday morning, April 13, as he rode out Alabama 14 west of Auburn, an approaching vehicle struck his bike, knocking him off and onto the roadway. He figures the pain when his face slammed into the asphalt was excruciating, but fortunately, he doesn’t know.

“I have no memory of that day whatsoever,” he says. “My mind is a total blank.”

By the time Teresa realized that a law enforcement officer was behind the wheel of the SUV driving toward her Notasulga home, an ambulance transporting her unconscious husband was flying down I-85, bound for the emergency room at Montgomery’s Baptist Medical Center South.

The officer didn’t need to tell Teresa that her husband had been involved in a terrible accident. In her heart, she knew.

Kessler had been in Baptist South’s ICU three day when doctors transferred him to UAB in Birmingham, where he, and his brain, remained unresponsive and his wife remained in the dark.

“The doctors wouldn’t tell me anything, I think because they didn’t know what was going to happen and that whatever did happen wouldn’t be good,” Teresa said. “But at some point, one of the nurses asked me which nursing home would be most convenient to me.”

The day Kessler returned to the land of the living, his bath-administering nurses were stunned, and understandably so. Extensive medical tests had indicated his brain was too damaged to communicate with his body.

The news that he was alert and talking spread quickly to his physicians, who called it nothing less than a miracle.

“They reran all the tests, and what they found was a viable, active brain that was repairing itself,” Kessler said.

A week later, a 30-pounds-lighter Kessler was moved to UAB’s Spain Rehab Center.

“I was too weak to hold myself up and had no sense of balance, but my first day there, they took me to the gym to start weight training,” he said.

Rehab was grueling, but on the first day of June, doctors signed Kessler’s discharge papers, and he and Teresa headed for home sweet home—where, within days, he was peddling off on the very bicycle that had escaped unscathed that fateful day in April. And on the last day of June, Kessler walked into Funchess Hall and headed for his first-floor office.

In the days and weeks following Kessler’s accident, Department of Horticulture head Des Layne had kept his faculty and College of Ag administrators informed about their longtime colleague’s condition, including his painstaking but remarkable recovery, but even so, his quiet return came as a surprise.

“People started coming out in the hall, smiling and hugging me,” he said. “It was extremely encouraging, and I was very touched.

“I know many of them had been praying for me, and I appreciated that.”

His accident had occurred near the end of spring semester, and students taking his greenhouse management and fruit and vegetable production classes at the time learned what had happened from the horticulture faculty members who stepped up and finished out the semester for the professor. As fall semester began, returning students did a double take at the sight of the 65-year-old, all-in-one-piece Kessler.

“The last they had heard, I was gonna die,” he said.