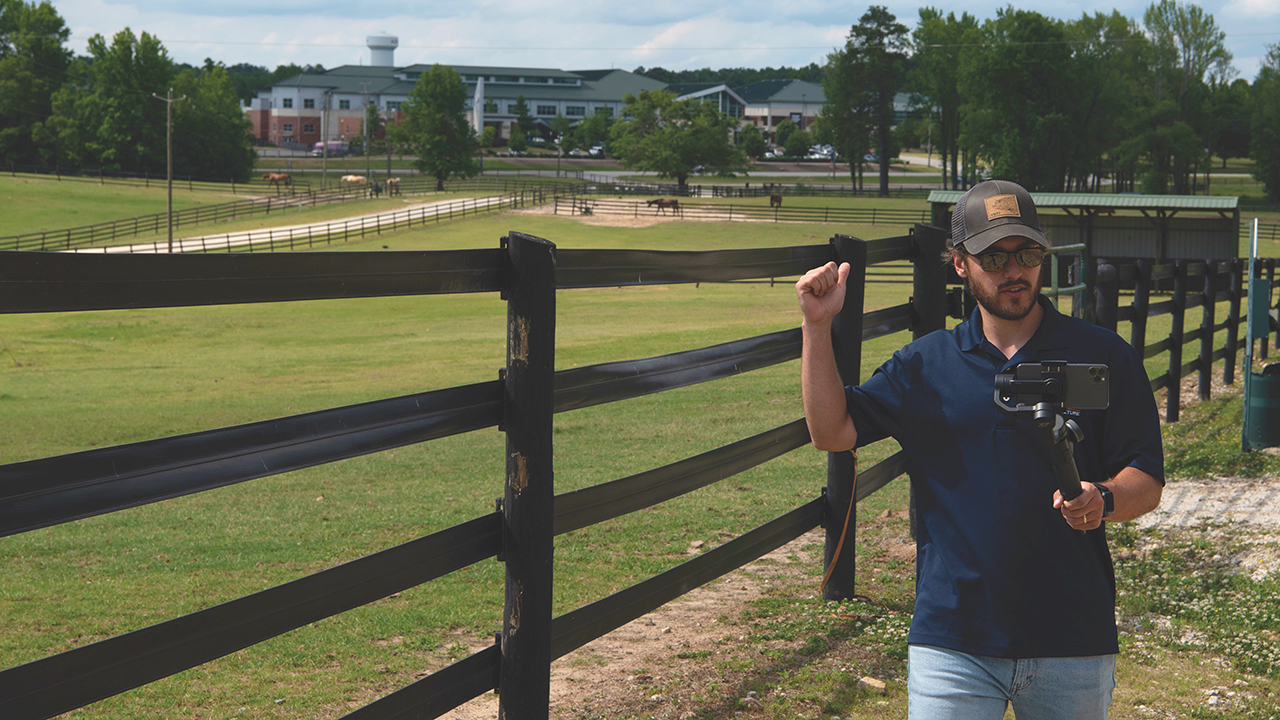 The dorms, classrooms, dining halls, auditoriums, offices and fields may all be empty, but the College of Agriculture at Auburn University is still giving live tours.

The outbreak of the novel coronavirus, COVID-19, in the United States not only forced students back home and employees out of their offices, but it presented a major challenge for student recruiting administrators like Brandon Justice for the College of Agriculture.

“Everything shut down in March, and that time — the spring semester — really is the busiest time for accepted students to visit,” Justice explained. “Typically, that’s how they’ll make those final decisions. Since they weren’t able to do that, we had to quickly adjust.”

Justice and his colleagues set up live virtual tours on the usual tour registration site for every Monday and Wednesday through the remainder of the spring semester. While many colleges and universities across the nation are offering virtual tours, few are going to the lengths Justice is for the college.

The key, he said, is offering an experience that feels as close to the real thing as possible.

“I go up to campus, and the students join me,” he said. “I walk around campus, and we have a graduate assistant in my office, Amanda Bell, who is on her computer and shares her screen with some of a PowerPoint that has the information we’d share during a session on campus. She’ll switch back and forth to my view, and I’m recording and talking live to the students.”

Bell said it’s the combination of live tour and slides that makes the experience for prospective students.

“We’ve received great feedback from that,” she said. “I just heard from a mom who said this was the best tour they’ve taken, because they actually got to see Auburn. She said a lot of colleges are just kind of putting up slides and pictures. We’re doing this live as Brandon walks across campus.”

Prospective students are able to tour Ag Hill and take their pick of a research facility tour, such as the Bees Lab, the Equestrian Center, the Paterson Greenhouses and the Miller Poultry Research and Education Center. Once they join the tour, both Justice and Bell are available to help them, live.

“I’m in the virtual meeting space as the students and their parents arrive,” Bell said. “I help them get settled and connected, navigate any audio issues, that sort of thing. Because, you know, it has been a transition for everyone. So there are people still navigating what is new technology to them, and I’m there for them through that.”

If students have questions, they can type them in the Zoom chat feature, and Bell replies to them directly.

Following each tour, virtual tour packets are emailed to students with the materials they would have received on campus. These are tailored to each student, Justice said, depending on his or her interests.

“One thing that I tell students all the time is that I didn’t know what I wanted to do when I went to college,” he said. “I don’t feel like anybody had the conversation with me about what my interests were and then how to take those and tie them to a major.”

That’s exactly what the College of Agriculture does.

Included in the information Bell shares during the tour are how the college’s majors separate into areas of interest. Each area of interest is tied not only to majors, but to careers as well.

“So each student is encouraged to think about what their interests are,” Justice said.

If a student indicates his or her interests when registering, he or she will not only get the college’s general brochure but the coursework for the major of interest and a “major card” with all the tracks and majors within the department and the careers those majors can lead to.

“It helps them to put all those things together after the visit,” Justice said. “That part of it has been well-received on campus, but being able to continue that level of personalization, I think that’s what the college does really well. Not everyone in the college is going to go the same route.”

The truest test of the new tours was on Accepted Students Day, April 2. Justice said the college had nearly 60 students from more than a dozen states and as far as California tune in for the day’s virtual activities.

For more than three hours, College of Agriculture faculty, staff and students had ongoing conversations with accepted students, answering questions and allowing them to come and go to the tours they were most interested in. Accepted students received information from Financial Aid, college faculty and staff, student workers, presidents of student organizations — even a few of the college’s animals.

“Given our situation, this was our show of support from Auburn to our incoming class,” he said, “and it was a huge success.”

Amy Wright, associate dean for instruction in the College of Agriculture, said she was blown away by the success of the tours.

“They are awesome,” she said. “I’ve been watching them and got to participate a little bit in Accepted Students Day, and they just have such a good system with Amanda answering the questions in the chat and Brandon actually doing the tour. He jumped on that so quickly that we really didn’t have any down time. And the feedback has been extremely positive.”

Justice and Bell send out a survey to students and parents following every tour, and they sent an additional survey question after Accepted Students Day asking for feedback on the virtual experience.

One prospective student named Ally said she was grateful to “see where/how all the magic happens.” Another named Susannah said she was “impressed with Auburn’s perseverance. For seniors like myself,” she said, “this event served as a comforting and normal experience when we are being bombarded with so many unknowns.”

Bell said the feedback has been comforting.

“You worry about technical issues or if the students are going to like it,” she said. “So getting that thank you is totally reassuring that our efforts are definitely proving positive.”

“I think Susannah said it best,” he said. “There’s a lot of uncertainty right now, so anything these students can get, they want to be able to soak it in before they make these decisions.”

Justice credited the faculty, staff and student ambassadors that participated in the tours, particularly Accepted Students Day. “Their involvement made it more than a Zoom meeting where I talk on and on,” he said. “They brought these sessions to life by showing or talking about what they are passionate about.”

The college is planning some different things for the summer to continue to engage prospective students on a new schedule. But Justice said he sees a future for live virtual tours beyond the need for social distancing created by the coronavirus.

He said he thinks about the students on Accepted Students Day who tuned in from as far as California or Michigan.

“We see this as something that can extend into the future as a way for students to visit campus without having to be on campus, for those who can’t do so easily,” Justice said.

Bell agreed and said it has been “an almost perfect solution” with legs that can continue to run.

“This is a great way for us to still engage with the students not only that were planning on coming but those that are generally interested,” she said. “Now they have the time for that interest and engaging with the college maybe sooner than they would have otherwise. It’s been a really wonderful opportunity for us to get in front of those students and ensure they have what they need one or two clicks away.”