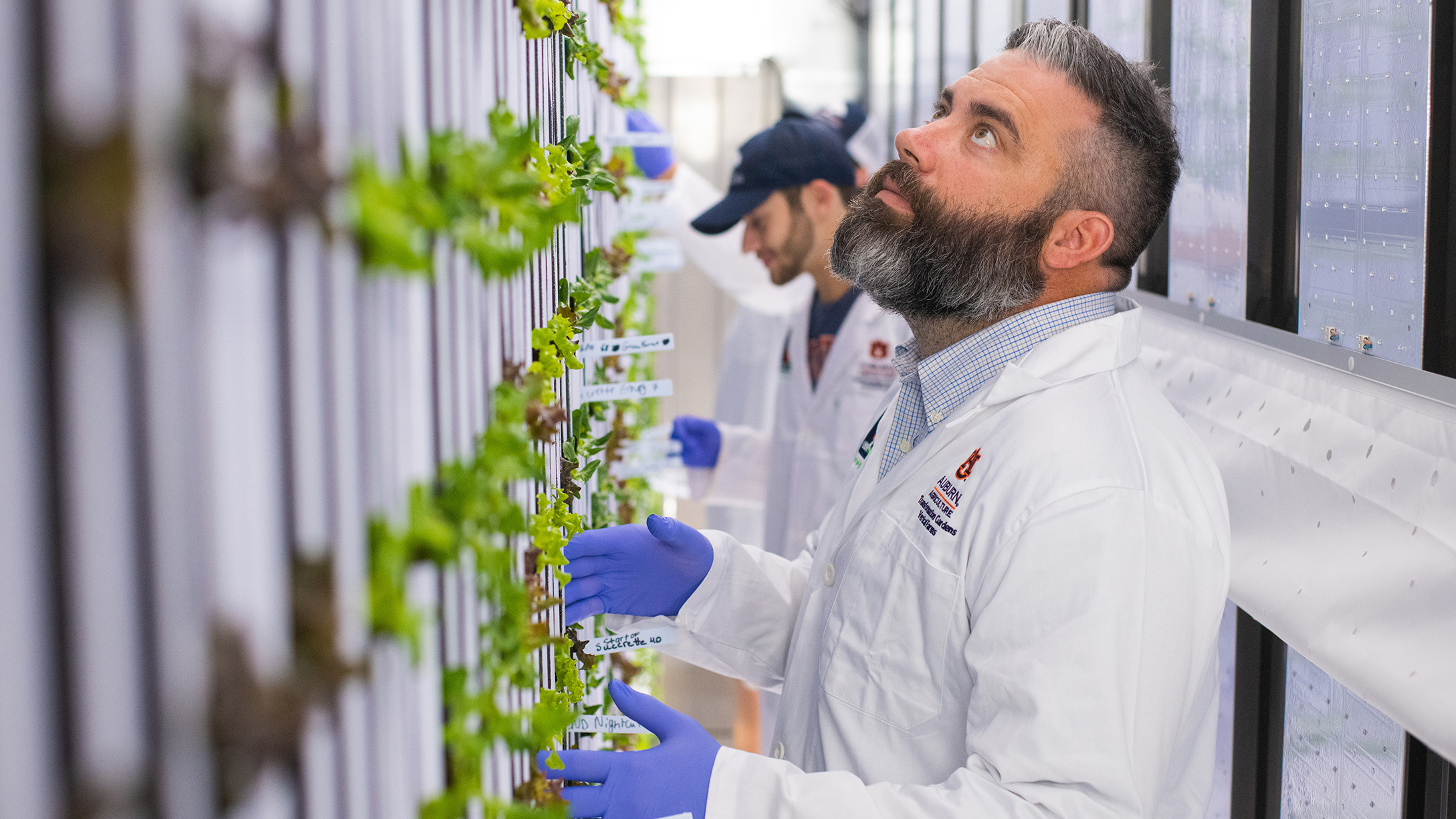 Recycled shipping containers have gained popularity in recent years, being converted into everything from houses to small stores—but the Auburn University College of Agriculture, in partnership with Campus Dining, is using them as self-contained “vertical” farms to grow produce to serve to students.

In April, the college acquired two Freight Farms shipping containers that have been converted into technologically advanced hydroponic growing stations in which plants grow vertically indoors without soil, getting their nutrition from water and light energy from powerful LEDs.

Now, the farms are producing the first crop of lettuce.

“This is state of the art,” said Desmond Layne, head of the Department of Horticulture. “We’re talking growing from seed to fork in four to six weeks, depending on whether it is lettuce, arugula or another vegetable crop that can grow in there. And we can produce 15 times as much per year as we could outside in the same exact spot.”

Associate Professor of Horticulture Daniel Wells taught a vertical farming course this spring and leads operations of the vertical farms.

Wells said the containers are outfitted with a complete climate control system, which includes air conditioning and humidity control. Because they are highly insulated, the system ensures the same climate 365 days a year.

The converted containers also have an elaborate lighting system, giving all the light the plants need from two color LEDs.

“We can do any number of colors of lights,” he said. “But it turns out for photosynthesis, plants use mostly red and blue light. What’s neat about that is you can cut out a lot of the other color spectrum, creating far less heat energy. That’s very efficient. It means more of the energy used is turned into light than heat.”

“Ambient CO2, what you and I are exposed to every day, is about 400 ppm [parts per million],” he said. “And that’s fine, plants can grow there. But if we boost the CO2 to 1,000 ppm, they’ll grow faster. And because we’re containing the CO2, the plants can really use it. And it’s not dangerous for humans at all.”

Wells and Director of Dining and Concessions Glenn Loughridge first initiated a partnership between the College of Agriculture and Campus Dining five years ago through the Auburn Aquaponics Project, which uses hydroponics and aquaculture technologies to provide a system in which nutrient-laden wastewater from fish production is used as a food source for plant growth. Today, fish from this effort are served in dining facilities on the Auburn campus.

The new vertical farms build on that effort.

“We’re in the process of finishing a $26 million dining hall in the center of campus,” Loughridge said. “It has always been foremost in my mind that we would have the opportunity to feature produce grown here on campus in that dining hall. In our biggest location, our biggest asset, we want to bring our A-game.

“This is hyper-local, on-campus sourcing,” he added. “Can you imagine being a potential student coming to tour, seeing where these products are grown, and then going to eat there? It’s incredible. We truly believe this elevates our dining experience.”

The converted shipping containers were manufactured by Freight Farms, a Boston-based company operating in 45 states and 28 countries.

“There are a few different companies out there doing this,” Layne said. “But Freight Farms is the most sophisticated. They’re the ones who have both the best product on the market and the largest production of these containers. It’s really a best-case scenario.”

Adam Lenhard, a rising senior majoring in biological agricultural technology management, said Wells’ course has been one of the most influential courses he’s taken at Auburn.

“It has been very helpful, not just in preparation for the arrival of the freights, but also in learning all about new hydroponic technologies and growing techniques,” Lenhard said. “Post-graduation, I plan to continue to work with these types of indoor, LED hydroponic systems. My primary goal after college is to normalize urban hydroponic farming, provide large, consistent yields of fresh vegetables and provide food to those in need who do not have as much access to fresh produce.”

The vertical farms are located on the College of Agriculture’s planned 16-acre Transformation Garden on the south end of the university’s campus, near the intersection of Lem Morrison Drive and Duncan Drive. The goal of the garden is to encompass every aspect of plant-based agriculture, including everything from fruits and vegetables to ornamentals to row crops and more.

The Transformation Garden will showcase new technology and the history of agriculture, as it envelops Auburn’s Old Rotation, a single-acre research plot created in 1896. Continuously since that year, the historic landmark has been the site for testing and advancing transformative ideas that are now commonplace—ideas like crop rotation, cover crops and low- and no-till farming.

Information about financial donations to help develop the new Transformation Garden is available online or by contacting Phillip Cowart, College of Agriculture director of development, at poc0001@auburn.edu or 334-844-1198.