Cierra James takes next step in career as a food scientist 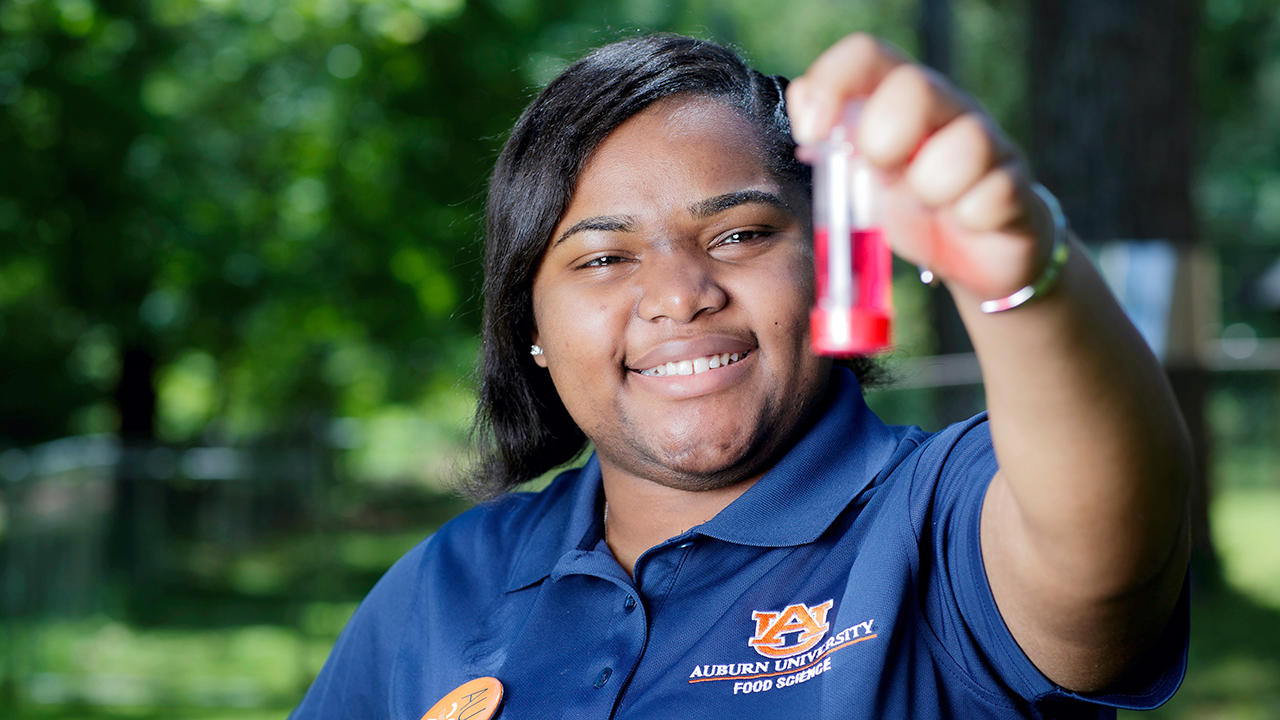 Cierra James knows exactly what she wants to do for a living, and it’s not a profession you hear often.

“My ultimate dream job is to make flavors,” said the recent graduate from Stone Mountain, Georgia, who majored in food science. “I don’t have a company or type of company I want to work for, whether it’s a beverage company, a candy company. I really just want to make flavors. Everybody consumes artificial flavors, but no one thinks about how you get something to taste like that.”

“It’s actually kind of funny,” James said. “I wanted to be a marine biologist for a long time, and I went to marine biology camp at Dauphin Island in high school. It was a good experience, and I liked it. But I realized I didn’t like it enough for it to be my life, my career.”

James counts herself as one of the lucky ones to learn she needed to make a switch so early. She always enjoyed cooking, science and being in a lab. She just didn’t realize she could combine the three until she was watching the Food Network one day, and someone was described as a “food scientist.”

“I thought, ‘What the heck is a food scientist?’” she said. “I looked it up and thought it was really interesting.”

When it came time to select a university, she looked at those offering food science as a major.

“Honestly, one of the main reasons Auburn was really appealing to me was because I thought about if I changed my mind and wanted to go back to marine biology,” she said. “Auburn had both. But I had Intro to Food Science with Dr. Bell, and I’ve been in love with it ever since.”

“She always sat on the front row,” he recalled. “She was inquisitive, asking questions for additional explanations. She was never satisfied by doing something only halfway, which contributed to her high academic success. She also sought out additional opportunities for new experiences, which is how she ended up doing research in my laboratory.”

James credits Bell as her most influential professor at Auburn.

“Dr. Bell has helped me a lot,” she said. “He was the first food science professor I had, and he’s really taken me and my friend Amanda under his wing, helping us do a lot of stuff and to get involved with things that he recommends would be good opportunities for us.”

James credits her father, Lionel, as one of the most influential people in her life.

“Every time I start a new year, he and I have a daddy-daughter date,” she said. “It’s just me and him, and we do an activity or go out to lunch.”

She said he would always remind her that while each year would present its own challenges, she had already accomplished so much to reach that point.

“He’d say, ‘Take a deep breath, and if you need to call me, call me. I don’t care what time it is,’” she said. “He’s been a strong presence. When I get down in the dumps, he’s one of the things that helps me push through.”

She said her father originally would have preferred she go to school in-state, but he supported her decision to go to Auburn.

“I said, ‘If you get me there, I promise to do what I’ve got to do to get scholarships so you don’t have to pay as much the following years,’” she said. “A few weeks ago, he told me, ‘I’m so proud of you, because you kept up your end of this deal. I hoped you would do good, but you did great.’”

Shy as a child, James said her intelligence was often overlooked.

“I didn’t talk a lot, so people assumed I didn’t pay attention,” she said. “I remember people would ask me questions and be amazed by how I could answer. My teachers would tell my parents, ‘People don’t realize how smart she is.’”

“But I was observant,” she said. “That’s just how I was, and once I got to know you, you couldn’t get me to shut up.”

James said Auburn helped force her out of her comfort zone and gave her an environment where she couldn’t afford to be shy anymore. Throughout her time in the College of Agriculture, she immersed herself in social and intellectual opportunities, including as a supplemental instructor, a volunteer for Gameday Recycling, and a member of the National Society for Collegiate Scholars, the Food Science Club and Phi Kappa Phi.

“I definitely still have my moments of shyness,” she said. “But my dad talks a lot, and I luckily inherited that from him.”

This fall, James is headed northeast to Virginia Tech for graduate studies in food chemistry. She’ll work under Professor Sean O’Keefe on a project that involves flavor chemistry.

While ending her undergraduate experience quarantined because of the COVID-19 outbreak was not ideal, James said she has zero regrets.

“My dad always tells me, ‘You’re never going to have this exact moment ever again,’” she said. “So I’ve been thinking about that, and it is bittersweet. But I’m okay, my family is okay. And I have nothing that I think, ‘I wish I could go back and do that.’ I’m happy with how I spent my time at Auburn.”

Bell said he wishes James the best as she pursues her career as a food scientist.

“I hope she continues to grow both personally and professionally to become that food scientist who will help solve the complex problems associated with feeding the growing population,” he said. “But equally important is for Cierra to be satisfied and happy in her profession.”