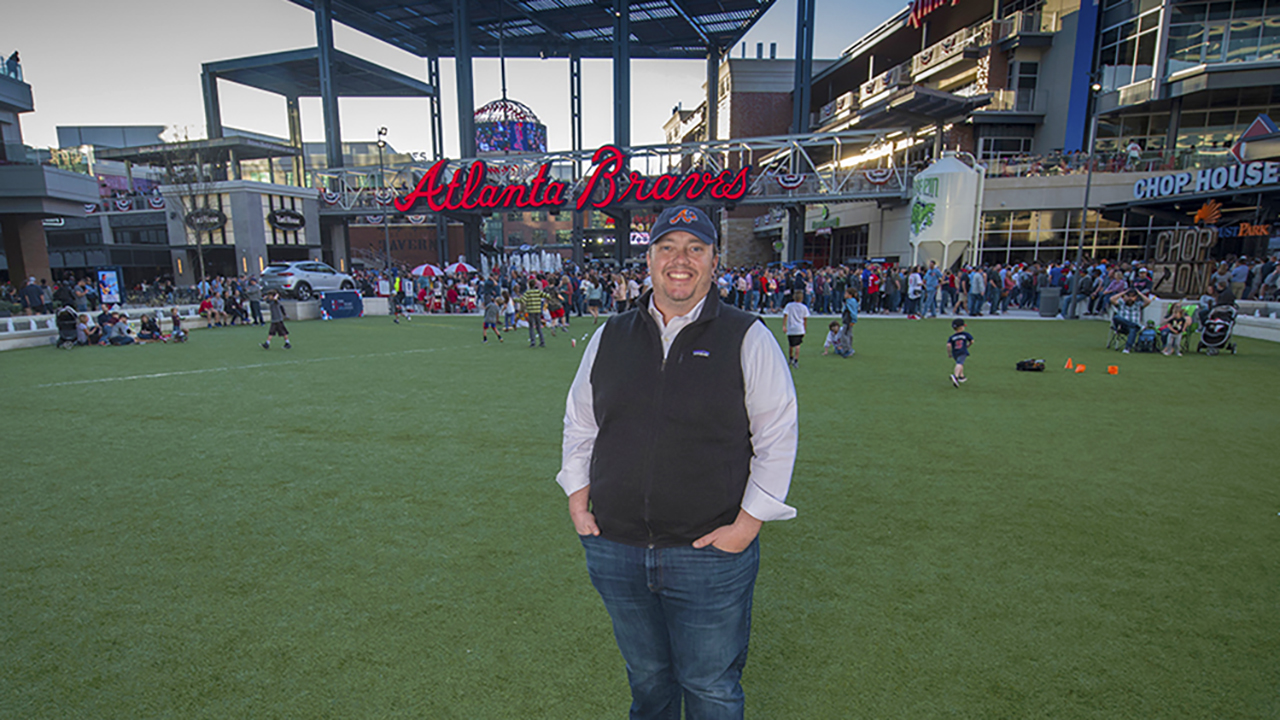 On a mid-March afternoon in 1998, Tony Gibson high-fived friends and family as he celebrated graduating with his horticulture degree from Auburn University. But the festivities were short and sweet, because this new alumnus had things to do.

Within a month, he had gotten married, bought a house and started his own landscape company, all back home in Jonesboro, Georgia, just south of Atlanta.

Marriage and home-buying are rites of passage into adulthood, more or less. But going into business for oneself? Not so much.

But Gibson had made up his mind, and as Auburn horticulture Professor Emeritus Harry Ponder says of his former student, “Tony never was afraid to go for it.”

“I was determined to try, because if I didn’t, I knew I’d always wonder what would have happened ‘if,’” he says. “The way I saw it, if it didn’t work out, I could always go to work for somebody else.”

So he sold the Chevy S-10 Blazer he’d bought in high school with money he’d saved from a decade of mowing lawns, combined that with some cash he’d received from graduation well-wishers and, with that grand total of $9,500, bought a business license and a “company” truck, and Gibson Landscape was born.

“I didn’t borrow a single dime—not from my dad, not from a bank, not from anybody,” Gibson says today. “I had no real office, no business line; just me and my cell phone.”

In the 20 years since, Gibson has grown that one-man show into a $28 million industry giant that provides hardscape and landscape construction, landscape maintenance and irrigation management services for high-profile commercial clients in Atlanta and across the southeast. With every project—from Nashville’s Omni Hotel and Country Music Hall of Fame to the Jekyll Island Convention Center—Gibson and his 185 employees focus on providing innovative solutions, superior quality and service excellence.

In Atlanta, of course, “Built by Gibson Landscape” banners could be flying all over the city. Last spring, for instance, just in time for the Atlanta Braves’ opening day inside brand-new SunTrust Park, Gibson crews completed $7 million worth of plantings, water features and hardscapes at The Battery, the mixed-use development surrounding the ballpark. And right now in downtown Atlanta, Gibson Landscape is the major contractor in a $25 million Centennial Olympic Park renovation and expansion project.

“The overall project’s being implemented in three phases, but if you combine all three phases, all the irrigation, tree planting, shrubs and groundcovers, soil importing, final, sod, pavers, sidewalks, stairs and vertical hardscapes are in our scope,” Gibson says. “Everything has to be completed before Super Bowl LIII in Atlanta in early 2019.”

“It’s about reputation and track record,” he says. “It’s about building relationships. People have to know they can count on you to do what you say you’ll do, when you say you’ll do it. Building trust by honoring commitments is at the heart of our company.”

Gibson spent his early years in Cleveland, Tennessee, where his dad, Wallace, was a successful general contractor. But the collapse of savings and loan associations across the nation in the mid-1980s dealt a whammy to the construction industry, and Wallace Gibson was not immune. He lost his business, his equipment, his house, his furniture—every material thing.

Down but not out, he moved his wife and three kids to Jonesboro, near family, and started over. He may have hit rock bottom, but he did not intend to stay there. Son Tony, 11, took note.

“My dad is a tenacious entrepreneur,” Gibson says. “He never looked back, just up. That’s when my dad became my hero.”

The family had been in Jonesboro about a year when Gibson got his first set of wheels.

So he did, and by the next grass-growing season, he was the lawn service of record for nearly every trailer in the mobile home park his dad helped run.

Business was good, but a couple of years later, older brother Todd’s summer job at a local business, Walker Nursery, started looking way more interesting than pushing a lawn mower. He started making such a nuisance of himself at the nursery that owner Perry Walker eventually broke down and hired the rising high school freshman. The following summer, Walker promoted the kid from general flunky to a landscape crewmember, and it was then that Gibson found his calling.

“The first day I went out on an install job, I was mesmerized,” Gibson says. “I mean, we basically started with an empty lot and by the end of the day, we’d transformed it into this incredible landscape. I was blown away.”

From then on, Gibson looked at every day, every job, as an adventure, a chance to create a masterpiece. Walker liked Gibson’s energy and excitement, and he had also noted that the teen seemed to have an eye for landscape design.

“One day, Perry came up to me and said, ‘You ought to go to Auburn,’” Gibson says. “I hadn’t really thought about where I’d go to college—all I knew was, anywhere but Georgia—and Auburn sounded like as good a place as any.”

“But that was more the theory side of things, and I wasn’t interested in theory,” he says. “I wanted the practical. Ultimately, I fell in love with horticulture.”

The summer of his junior year at Auburn, Gibson interned with a mega landscape operation in Atlanta and did more than rack up valuable landscaping experience; he also began to observe how similar that big a company was to the lawn-mowing business he’d started when he was 12. A larger scale, but same principles.

By summer’s end, he had worked his way up to foreman of a landscape crew that serviced big-time corporate accounts such as BellSouth and Coca-Cola and had lined up a second internship there the following summer. But most important, he had resolved to have a business that big of his own one day soon. Period. End of discussion.

His dad gave his son’s entrepreneurial ambition his blessings and passed along one important nugget of wisdom.

“He said, you have to start with people you know,” Gibson says.

The younger Gibson followed that advice, and in the early going, Gibson Landscape was basically a lawn service with a clientele that consisted mostly of family and folks in the Gibson circle. That was fine, because there were only three employees: Gibson and a couple of otherwise unemployed acquaintances who lived 15 minutes away in Riverdale and who, unfortunately, had no means of transportation.

“I told them I’d come get them, but they had to meet me every morning at 6 a.m. sharp at the end of a certain road,” he says. “So every day, I’d go over and pick them up and then take them back home in the evening”

Then they started taking their sweet time getting to the pickup point, so Gibson would have to sit and wait on them. Then, one day, he didn’t.

And that very day, he got a call for his first big job. It was for a major landscape installation at a mobile home sales lot.

“He had gone in a nursery down the road and asked them if they knew a landscaper who did installs, and they gave him my card, so he called me,” Gibson says.

Late that afternoon, the client drove by to check on progress and found Gibson digging holes and a young lady—who turned out be Melissa, Gibson’s schoolteacher bride—planting.

“The client said, ‘Man, where’s the rest of your crew?’ and I said, ‘They’re on another job,’” Gibson says. “I couldn’t help it if he assumed I meant I had them working at another one of <ital>my<ital> jobs.”

Whatever, the client was satisfied with the work and hired him for another job in Alabama, and from there, Gibson Landscape was on its way. The sky was the limit.

Only, it wasn’t. Because on July 7, 2011, the words “Tony, we can’t make payroll” stopped his world from spinning.

He hadn’t even seen it coming.

“I really thought I had it all together,” Gibson says. “But the reality is, you’re losing money long before you get to the point where you don’t have enough money to meet payroll. I knew business had been off because of the recession, but, I don’t know, maybe I thought I was invincible.

“All I could think was, I have 80 families who are expecting a paycheck from Gibson Landscape next week, and I cannot let them down,” he said. “But this was something that was bigger than I was.”

He needed a miracle.

“I immediately started a three-day fast and then spent all day the last day, Saturday, in my basement praying, asking the good Lord to handle it,” he says.

Around 5 that evening, exhausted but strangely at peace, he climbed the basement stairs and emerged from seclusion.

“I turned on my cell phone and saw I’d missed a text from our accountant,” Gibson says. “For some reason, she’d just happened to go by the office that day and just happened to check the mailbox. A check was in there, one that wasn’t due yet.”

“I realized that, up until that point, I hadn’t given up control,” he says. “Ever since that day, I’ve approached everything saying Lord, you know how bad I want to control things, but from now on, I’m gonna trust you. I’ll keep working hard, but you’re the one running things.”

Like his dad a quarter century before, Gibson had hit rock bottom, but he did not intend to stay there.