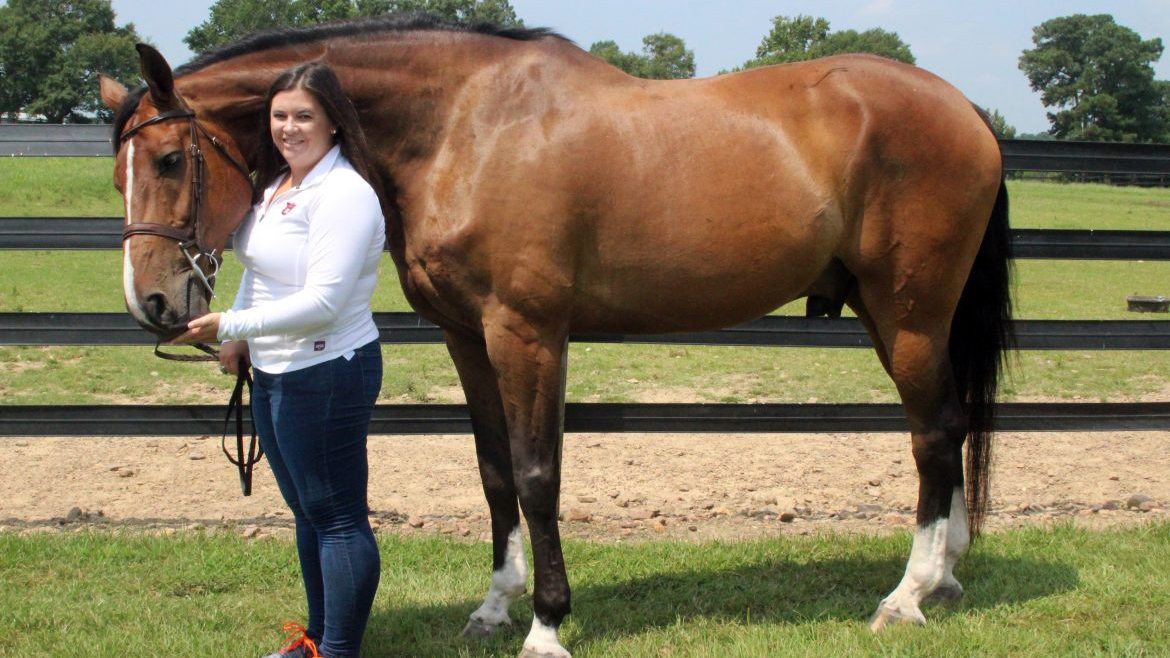 Ask Auburn Equestrian head coach Greg Williams what makes Jessica Braswell such a special associate head coach, and he has one answer: Passion.

That passion began when Braswell was just 4 years old.

“When I took my first horse-riding lesson it just sort of stuck with me and I kept doing it,” she said. “And after I attended an equestrian camp here at Auburn, I fell in love with it and knew it was where I wanted to attend college.”

Williams began recruiting Braswell when she was a high schooler in Richmond, Virginia, and by the time she finished her freshman year at Auburn in 2006, she had already helped the equestrian program accomplish something that had never been done before: win a national championship.

“It was a great introduction to college riding, and it was huge to get to be a part of that,” Braswell said. “There’s so many girls that came before me that set the stage and built the program, and for us to be the first team to win a national championship and set the stage for what would come later was really cool.”

Braswell excelled not only athletically during her time as an Auburn student but academically as well, as a double major in agricultural business and economics and Spanish international trade.

“Ag business was the best of both worlds for me because I got to have smaller classes while still getting a business education,” she said.

After completing her undergraduate degrees, Braswell pursued a master’s in business administration and had the opportunity to serve as the first graduate assistant in the equestrian program during that time.

“It was wonderful to get to stay with the program, and it was great experience,” said Braswell.

Braswell graduated with a master’s in 2010, and after years of being a part of Auburn’s equestrian team, she had finished college and moved to Hartford, Connecticut, to work as a strategist for CIGNA Health Care’s Proposal Management Department.

Braswell spent just five months in the corporate world before she got a call from her former coach offering her an assistant coaching position, and she didn’t hesitate for a moment to accept.

“It was good for me go away for a little bit and try something different but it was such an easy decision to come back to Auburn,” Braswell said. “Equestrian is where my heart is and to be able to coach for the university I love is truly amazing.”

Auburn’s equestrian program has continued to flourish since Braswell returned to the program as as the associate head coach overseeing the Hunt Seat discipline. In 2013, the Tigers won another National Collegiate Equestrian Association overall national title and Hunt Seat national title, and in 2016, Braswell helped the team win their first-ever SEC championship and capture yet another national championship.

In addition, while under Braswell’s guidance, the Auburn Hunt Seat program has totaled 25 All-Americans and 23 All-SEC recognitions.

2018 has been a banner year for Braswell, as Auburn brought home its fifth national championship trophy, and she was named NCEA coach of the year.

“Of course, being named the coach of the year was a huge honor, but it wouldn’t have been possible without Coach Williams and the rest of the team.”

Williams says his team has benefited incredibly by having Braswell as the associate head coach.

“She is so talented and passionate about Auburn,” he said. “She grew up in this program and was part of the building process, so students can connect with her in a special way.”