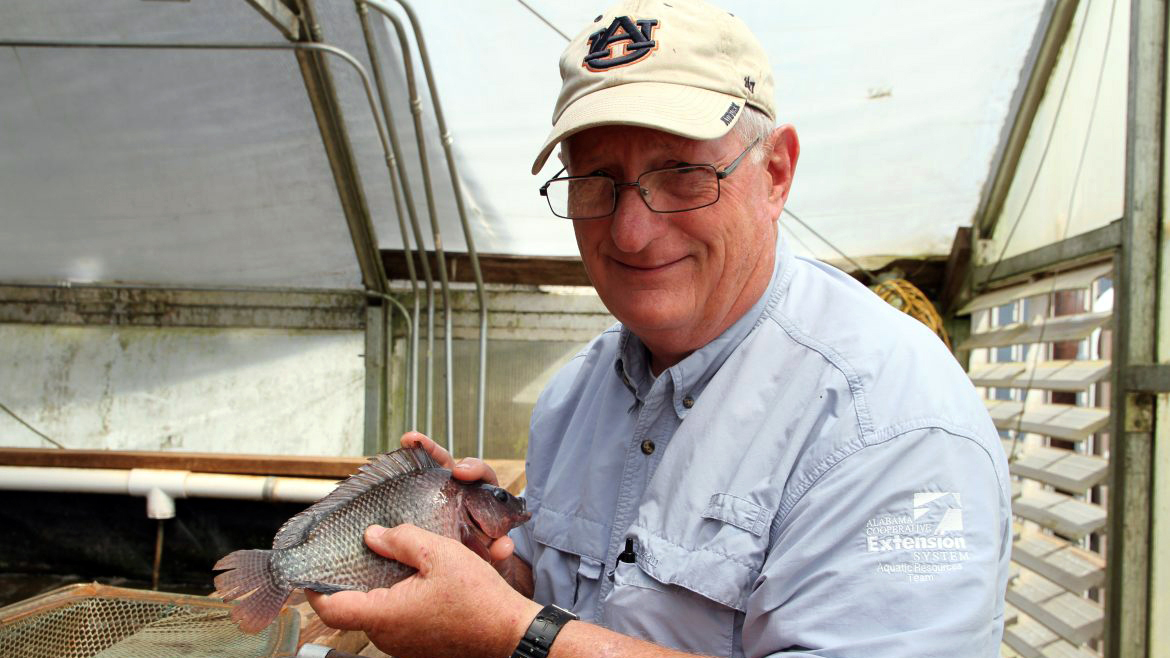 “Need is the mother of invention, and that’s what is driving much of this research,” said Jesse Chappell, a member of the group and associate professor and extension specialist in the College of Agriculture’s School of Fisheries, Aquaculture and Aquatic Sciences.

“We’ve put together a multi-disciplinary team from across campus to cover every aspect of a multi-trophic system of aquaculture production,” Chappell said.

Multi-trophic aquaculture is the process of re-tasking production byproducts such as nitrogen waste (nitrate) from a fed aquatic species (catfish or tilapia) to fertilize plants or to feed another aquatic (plant) species. Fish waste naturally produces high concentrations of nitrogen that can be used to fertilize a variety of plants. This approach helps to conserve nutrient resource inputs in feeding fish while still yielding maximum farming returns over a limited acreage.

“When we make an investment in feed nutrients, we can pass it through farm animals and add value to it,” Chappell said. “Fish are very efficient animals, but even they keep only about 25 percent of the feed they take in, turning it into fish biomass. It excretes the remainder of the nutrients in some form or another.

“That nutrient investment has value in whatever form we can capture. If we throw it away, we are literally throwing money away and then we have to pay an environmental price.”

The U.S. aquaculture industry is in the same place the poultry and swine industries were more than 60 years ago, Chappell said, so change has been a long time coming.

“In the 1950s, the poultry industry was moving away from pasture production of broilers and into chicken houses like we see today,” he said. “The same goes for swine. People still grow hogs in piney woods, but that’s not where most of them are grown. That’s because of the high level of animal care and efficiencies that are common in controlled systems as compared to open systems.

“Fish are tracking the same paths and for exactly the same economic drivers as these other animal protein production enterprises–gaining the predictability and the high level of survivorship and efficiency that this type of system can give us.”

Methods are available today that allow for the almost full utilization of the nutrient investments made in aquaculture, Chappell said.

“It’s important that the greenhouses be de-coupled–that is, not occupying the same space–because if we have plants in the fish house, they would always be moist, creating an environment for increased disease pressure and incidence of plant losses,” he said.

The two production platforms are hydraulically connected through the water system. “We feed the fish, and they absorb as much of the feed nutrients as possible, transforming our feed investment into fish biomass,” he said. “They will retain and excrete the balance.”

This system is designed in such a way that it’s not producing or exporting manure, Chappell said.

“We are processing the waste solids within a part the fish production system so we don’t bring solids over to the plant house,” he said. “We’re bringing over warm water enriched with a good concentration of nitrates, which is what the plants need. We can vary those nitrates from as low 50 parts per million up to 300 parts per million, depending on how much particular plants need and how much water or nutrients we’re using on a day-to-day basis to fertigate those plants.”

“In the last two to three years, we’ve been able to link up with the Campus Dining Services,” Chappell said. “Its director, Glenn Loughridge, is offering students high-quality foods we produce here on campus. He has provided enthusiastic support to take the original small demonstration system to the next level.”

The original greenhouses, both fish and plant, have been refurbished, and two additional greenhouses are being built to produce even more vegetables for student dining facilities. These facilities will produce tomatoes, cucumbers, leafy greens, and others according to the season.

“We provide 250 to 350 pounds of live fish per week (tilapia) that are dressed and made available for use in the campus kitchens,” Chappell said. “We produced peppers during the hot summer season and we’re now growing fall crops and those that tolerate more moderate temperatures.”

Hundreds of water, tilapia, cucumber and tomato samples have tested free of pathogens and safe for human consumption.

Chappell has worked with pond aquaculture for many years, but he believes the multi-trophic system represents a different, better way of doing things.

He envisions a 2,000- to 3,000-acre tract of land with a feed mill as its central hub, providing the feed necessary for an array of fish production barns.

“It’s certainly not without cost, but the relative cost of delivering feed in a tractor-trailer down the road 50 or 75 miles isn’t comparable,” he said. “Today’s diesel fuel is no longer 60 cents per gallon, but that’s the basis on which most other agriculture production models were built.

“We don’t need any trucks delivering feed with this system, and we can engineer production system which make the fish literally swim to the processing plant door. We can do all of this within a quarter-mile of the feed mill.”

The idea of this type of system is already being discussed in Asia, he said.

“If a feed mill can generate 40,000 to 50,000 tons, you could easily produce 30 million pounds of tilapia out the back door in thermally controlled barns,” he said. “Right now, there’s not enough tilapia produced and processed in the United States to push back against the avalanche of product coming in from all over the world. Many of our fish businesses are small, family owned-businesses, and it’s very difficult for them to compete with large-scale, integrated businesses located abroad.”

This concept, Chappell said, makes economic sense because so many cost points can be eliminated. Everything can be done on one tract of land to fully capture and re-task the investment made in nutrients, water and energy.

“Using an Auburn-developed technology, we’d take the slaughter plant waste and turn it into fish meal, with no odor nor wastewater,” he said. “It’s a flash-drying technology that turns discarded processing waste into dry meal in about two minutes. We can sell or use that fish meal. It’s currently selling for $1,700 to $1,800 per ton for the quality meal this technology provides.”

The water recovery element will re-process the water from fish systems, taking the manure out of the water and digesting it to form methane or bio-gas to provide energy to help operate the machinery in the feed mill or processing plant.

“Or, we can make heat with it—there are a variety of things you can do with bio-gas,” Chappell said. “We can take residue from methane production and put it out as a land application side-dressing on our hybrid poplar or eucalyptus trees. We make bio-gas from the solids we capture and produce a lot of vegetables, fruits and flowers using nitrate-rich water.”

“We can offset the cost completely and often earn more on the plant biomass than on the fish,” he said. “In traditional aquaculture, we fill ponds, but we don’t pass water through ponds. We need a fair amount of water to operate our ponds, but the controlled environment system we envision reduces water use by more than half. This approach reduces our water budget and our carbon footprint because we don’t have trucks running up and down the road as typical in traditional systems. Each aspect feeds the other using this approach.”

It’s a very simple system, Chappell said, a lot of which can already be found in Alabama’s poultry industry. “With swine, we see more and more farrow-to finish-operations. If production houses are scattered, there are opportunities for more diseases, which leads to a loss of animals.”

In the end, Chappell said, it’s all about good business.

“When we invest in feed, we want to capture all of the value that’s possible,” he said. “Good-quality catfish feed today will cost $400 plus per ton, and higher-quality fish feed costs closer to $600 per ton.

We need to do all we possibly can to turn that feed into high survivorship for our fish and better profitability to return revenue to the investment.”

“If you’re buying fish for $1 per pound, when you cut filets, you throw away about two-thirds of that fish’s body unless you process it into fish meal,” he said. “Automatically, that meat cost is $3 per pound before you turn the processing plant’s lights on. It’s a product that costs more than chicken or pork or sometimes steak.

“What if that price to the grower is 70 cents, and he has a 15-cent margin in it? He likes it better and the consumer likes it better. We can catch the by-products and turn them into other merchantable forms.”

About 1,000 heads of lettuce can be grown from feeding only 2 pounds of fish feed, he said.

“We also grow cucumbers and tomatoes on a trellis system, along with and about 25 other plants, all of which do very well using the nutrient stream coming out of the fish greenhouse.”

A good pond manager with catfish or tilapia in Alabama might produce 10,000 pounds of fish per acre, but a very crude multi-trophic system routinely produces 350,000 to more than 1 million pounds of live fish per acre depending on the type system used, Chappell said.

“In the U.S., our per-capita consumption of seafood is about 15 ½ pounds,” he said. “The remainder of the developed world is at least 30 pounds. Why are we lagging? We want to work on changing that and improving the quality of peoples’ diets and health.”

If the quality of seafood products is high, then they will be much more acceptable than some of the fast-food dietary trends of today, Chappell said.

The U.S. currently imports 92-plus percent of the seafood consumed in the country, he said, but that doesn’t have to be the case.

“We have to keep pushing the envelope to demonstrate these new approaches, and we want to get this adopted by producers in Alabama,” Chappell said. “This can be a large industry, much larger than the current aquaculture industry in Alabama.

With the help of Molly Smith, an Auburn doctoral student who manages the aquaponics project—researchers set up a monthly cash flow spreadsheet, keeping track of all cost inputs. The records have

been meticulously kept since 2015 and will allow researchers to produce a base budget. Whenever changes or additions have been made to the demonstration, a cost-benefit analysis has been conducted.

Hanson has worked with several aquaponics projects, with the most successful being those that find a niche market.

“Family operations also do well because labor costs are not charged as a cash account,” he said.

The vision of Hanson and other researchers is that U.S. consumers will eat more fish when it comes from commercialized aquaponics technology.

“At its height, the U.S. consumption of fish reached 16.5 pounds per person per year, and that’s much lower than the remainder of the developed world, where per-capita consumption is at least 30 pounds,” Hanson said. “I hope people will eat more when the fish come from an aquaponics system, where consumers can get their protein and vegetables all from one source.”

An Auburn University professor and researcher is one of the founding members of an international group of scientists and industry professionals that has launched an ambitious new project aimed at improved understanding of the most intractable species of weeds in the...

One of the many consequences of the COVID-19 pandemic has been limited supplies and higher prices of U.S. beef products. It’s an outcome that could have been predicted, especially considering supply-chain issues impacting the beef industry. Beef production in the U.S....

Students in three College of Agriculture departments performed well in regional, national and international competitions this spring. A team from the Department of Horticulture placed first in its size group (10-24 students) in the 45th National Collegiate Landscape...