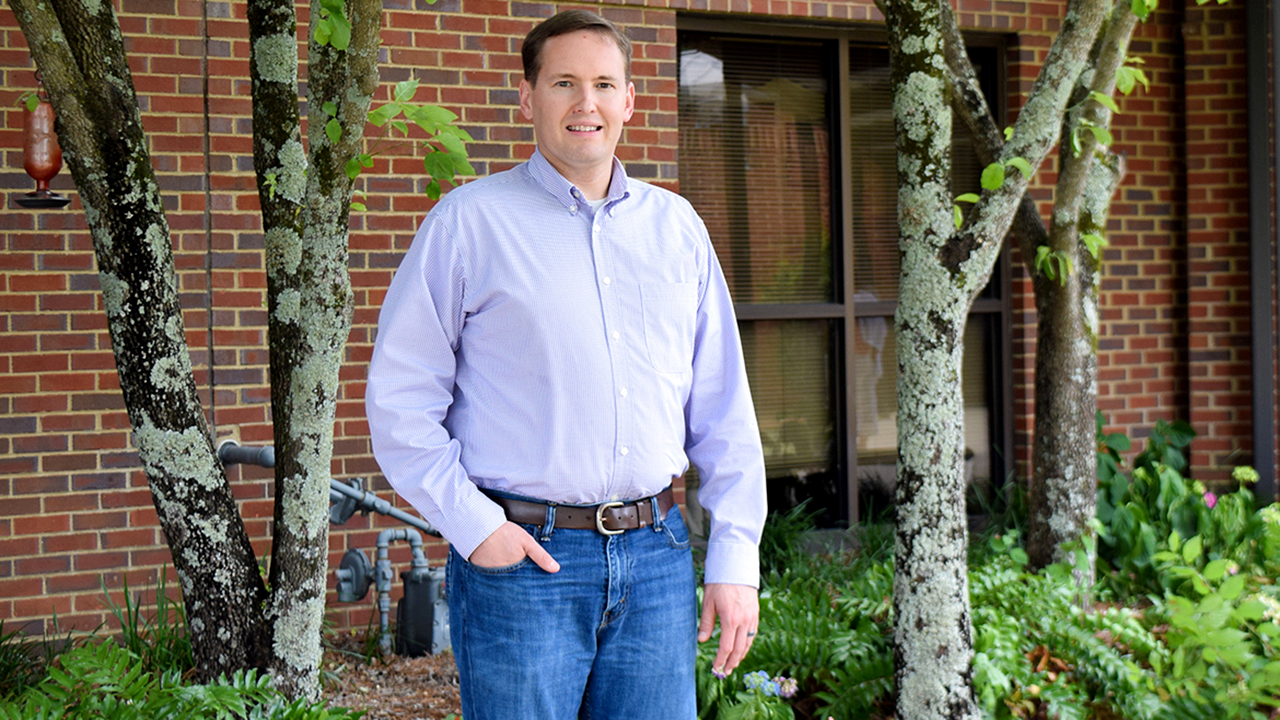 Sometimes when you think you’ve got life all mapped out, providence sends you in a different direction. Grady Smith, senior pastor of Gateway Baptist Church in Montgomery, knows all about that kind of journey.

Smith took an unlikely route to the ministry–—by way of an animal sciences degree from Auburn and a semester of vet school. And though the 1999 College of Agriculture alum’s decision to enter the ministry was as much a surprise to him as it was to others, Smith says the detour was no accident; it was divine intervention.

From the time he was a child, Smith had was dead set on becoming a veterinarian. He certainly told anyone in earshot that he was going to be a vet, and in high school, he prepared for his future vocation by working in an animal shelter. But before he could get into the College of Veterinary Medicine at Auburn, he had to decide on an undergraduate major.

After checking out several Auburn degree programs that could prepare him for his eventual studies, Smith realized that, although he had a great deal of small-animal medicine experience, he knew nothing about large-animal care. That recognition led him to Ag Hill and a conversation with then–animal sciences associate professor Dale Coleman, whose compelling sales pitch convinced Smith that an animal sciences/pre-vet major was the way to go.

“Dr. Coleman really cast the vision of how the animal sciences program would prepare me for a career in veterinary medicine, and he and sold me on the college too,” Smith said. “The College of Agriculture just had such a family feel. I knew it was where I wanted to be.”

Once he arrived on campus, Smith wasted no time in getting involved in the College of Agriculture and Auburn. He reignited the pre-vet club and served as president for three years. He also was a student recruiter for the university, a Student Government Association cabinet member and the webmaster in his intended destination: Auburn’s College of Veterinary Medicine.

When the time finally arrived to apply to that college, Smith soared over the entrance hurdles with ease. The dreaded interview process? Merely a chat with friends and co-workers. His acceptance? Swift. His destiny? In hand. Or was it?

Smith’s detour from veterinary medicine happened so quickly that even now, nearly 18 years later, Smith himself is still amazed.  All he can say about it is, “God had other plans for me.”

Faith had always played a big part in Smith’s life, and his participation in the college ministry at Auburn’s Lakeview Baptist Church played a prominent role in his life.

But one Sunday morning during worship, and not even a particularly special Sunday, “God just took hold of me while I was sitting there,” he said.

Smith had nearly a semester of vet school under his belt by then. His studies were going fine. He was not stressed and had no complaints. All he knows is that his lifelong desire to become a veterinarian vanished in a single Sunday. His heart had been turned.

“I can’t explain it. I just knew that God was sending me in another direction,” Smith said. “I felt that God was calling me to work with people through ministry.”

Smith says he fought the revelation for several weeks, but finally had to answer the new call on his life. After informing his bewildered and concerned professors and advisors that he would be withdrawing from vet school, Smith quickly embarked on his new destiny and never looked back.

He enrolled in the Southern Baptist Theological Seminary in Kentucky, earning his Master of Divinity degree and, eventually, a Doctor of Philosophy degree. His thesis, appropriately, involved examining the relationship between providence and man’s will.

In 2005, Smith returned to Auburn to minister at the church where his turning point had occurred. He served Lakeview Baptist, first as a pastoral intern then as one of its associate ministers, for nine years, until 2016, when he was given the opportunity to feed the flock at Gateway Baptist church as the senior pastor.

Some might consider Smith’s days preparing for a career that never materialized as wasted time, but he knows better. Though he has not directly used his degree, he says his experiences and activities as an animal sciences major prepared him well for his ultimate destiny.

“I realized that all my activities while I was pursuing my degree—leading the club, recruiting, representing students in the SGA—were preparing me and fueling my real passion– to serve and help people,” Smith said. “I’ve always loved God’s creatures, and now I get the privilege of feeding the Word of God to His sheep.”