Alumni chart new course for mushroom cultivation in the South 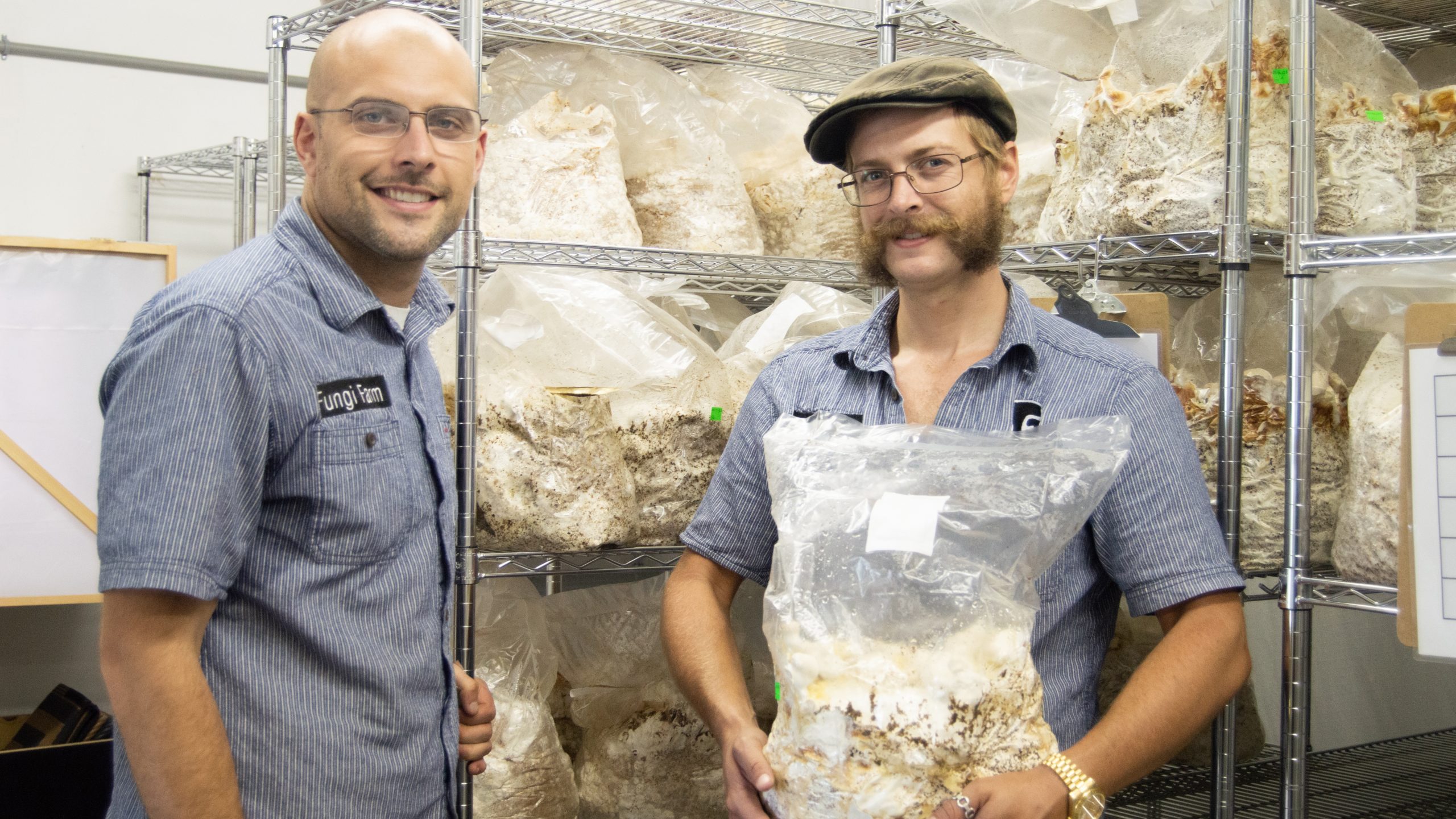 If you’ve eaten a gourmet mushroom in Alabama, there’s a good chance it was cultivated at Fungi Farm in Dadeville.

Founded by Allen Carroll, who studied agronomy in the College of Agriculture at Auburn University, Fungi Farm in Dadeville has quickly become a pioneer in mushroom agriculture, supporting mushroom farms across the entire state.

Founded in 2017, the farm with clients as far away as Chicago or South Florida had humble beginnings.

“I taught myself,” Carroll said. “This actually all started in a spare bedroom at my house. I basically built what we call a laminar flow hood: a filter built into a cabinet that you can sit on a table and work with petri dishes in front of it.”

Carroll said he started growing mushrooms before he came to Auburn and hoped to find an outlet for the interest while in school.

“I didn’t find any professors there cultivating mushrooms,” he said. “So I met a guy whose family owns the property we’re in. He became a 50-50 owner in this business with me until I just recently bought him out.”

Carroll built out the interior of the facility himself, buying equipment from eBay or receiving it secondhand.

“Everything is kind of slapped together around here,” he said. “But we’ve had to expand so much since we began.”

The farm sells both ready-to-fruit bags and what is known as mycelium “spawn,” the vegetative part of a fungus intended to be planted into their own substrates. They have options that are easier for homeowners or for farmers, depending on the grower’s abilities.

“Just so everybody understands, mushrooms are actually the fruiting body of a fungus,” Carroll explained. “It is very similar to picking an apple off of a tree. You don’t harm the ‘tree,’ or the mycelium in the bag, when you pick one of these mushrooms.”

“To get one of these to work, you need fresh air, humidity and some light — though not nearly as much light as you’d need for plants,” he said. “All you have to do is cut the bag open, push the air out of the bag, and wait. Within one to three weeks, you’ll have about 2 ½ pounds of mushrooms growing off the bag.”

Each bag usually gets two — sometimes three — harvests, with each harvest being half the size of the one before. Carroll said the materials left after the final harvest make great composting materials.

There are a few different materials that can constitute a bag. One, for example, will have soybean hull – animal feed – and hardwood fuel pellets cooked and then inoculated with whatever mushroom mycelium they want to grow.

Andrew Reynolds, who earned a degree in horticulture from Auburn in the spring of 2020 and works at Fungi Farm with Carroll, said they have a piece of equipment that makes sorting the materials into the bags easy.

“It would take an entire day to do a round of bags,” Reynolds said. “We can now do about 100 bags an hour.”

Once sorted, bags are cooked in a homemade, low-pressure autoclave that runs at about 2 psi.

“The bags are folded up and placed in a specific pattern in these four repurposed drums,” Reynolds said. “They’re connected to the boiler outside, and there is a cool air line as well. Once they’re cooked, it all basically seals itself in there, so there are no contaminants that can reach the food. And then, when we want, we can open it up and put our inoculum in there and feed it whatever we need to.”

Currently at full production with four drums, the farm can do about 240 bags per week. But Carroll said they are adding four more drums soon.

Before the novel coronavirus (COVID-19) outbreak, they sold approximately 150 bags a week. Once the country entered quarantine, that number was cut in half. Carroll said the farm is now getting back to its original operations.

While they have options for interested at-home growers, the farm’s primary customers are regional farmers from as far as Chicago, South Florida and Atlanta, with the biggest clients in Birmingham and Fairhope.

“Most of the cultivated mushrooms in Alabama originate in this lab,” Carroll said. “This is a gourmet mushroom laboratory, and what I mean by gourmet is that most of the mushrooms we grow here have a really short shelf life, so they’re not grown in these massive operations like you find in, say, Pennsylvania.”

“We’ve seen them in some retail stores before,” Reynolds said. “But they’re not the same quality.”

Fungi Farm primarily grows oyster mushrooms — genus pleurotus — in a number of varieties local to the area, including a brown oyster variety found in Chewacla State Park. They also grow lion’s mane, shitake, chestnut mushrooms and what is called the pioppino mushroom.

“Our main business model is truly about supporting mushroom farmers,” Carroll said. “But we are going to start growing our own mushrooms both to supplement our costs and to help teach farmers how to do this the most low-tech way possible.”