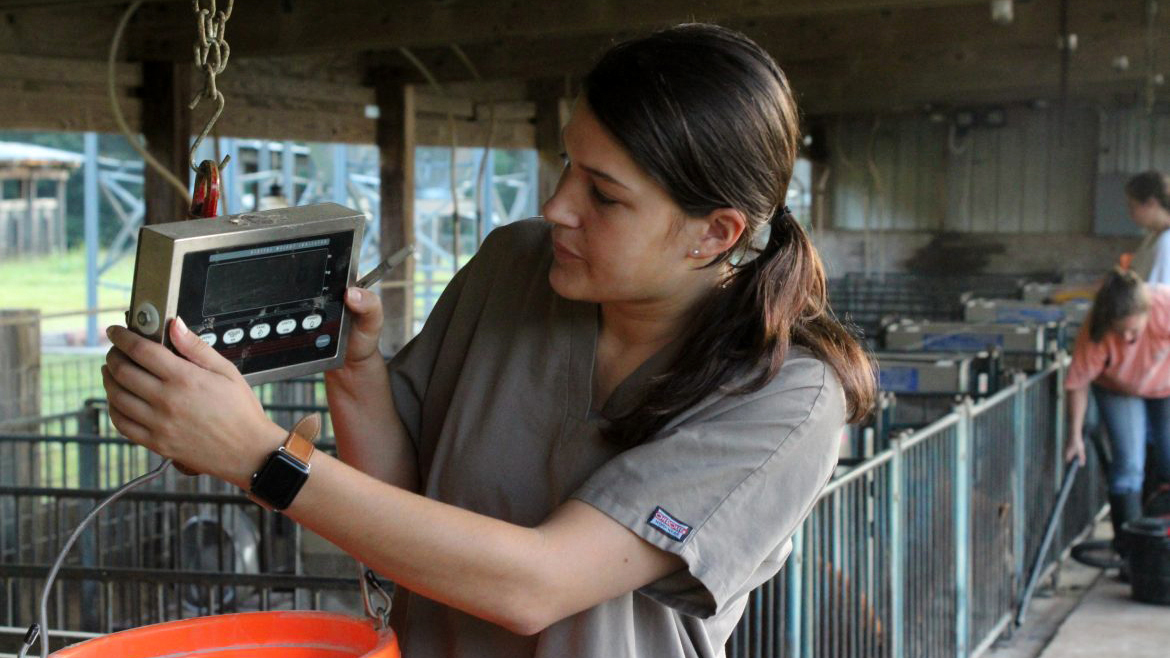 The hum of wet/dry vacuums mingles with pig grunts and squeals as Auburn University animal sciences pre-veterinarian junior Maegan Reeves approaches the pen of a curly-haired Mangalitsa pig and sticks a vacuum hose into the feed trough.

“Right now, we’re going to use these shop vacs and vacuum up the feed that’s left over,” said Reeves, who is dressed in veterinary scrubs and muck boots. “Then we dump that in a bucket and weigh it so we know how much they did and didn’t eat.”

It’s about 6:30 on a Monday morning in one of the nutrition barns at the Auburn University Swine Research and Education Center on Shug Jordan Parkway. While most college kids are still in bed, Reeves and five other Auburn students are up with the sun, busy collecting and weighing pig feed left over from the previous day and spraying out the long row of pens with a water hose.

Later in the morning, the students will weigh each Mangalitsa and record how much weight it has gained since last week. Some of the pigs will then be slotted for harvesting at various weights, after which one of the students will collect data on the meat and fat quality.

“There are not too many producers that have woolly pigs,” Reeves said. “So for the ones that do, it’s important for them to know when they should harvest them because there hasn’t been much research on them.”

Indeed, these students are assisting Auburn animal sciences associate professor Terry Brandebourg in one of the first research studies conducted in the U.S. on producing Mangalitsa pigs, a woolly Hungarian breed making a big splash in high-end pork niche markets in the U.S. Brandebourg, who studies the biology of fat cells, is collecting data on the breed’s growth process in hopes of giving farmers a better idea of the ideal harvest weight.

Mangalitsas are an exceptionally obese breed known for both their flavorful, marbled meat and high-quality lard. In the past decade or so, they have become popular with small-scale U.S. farmers, who sell them to chefs at upscale restaurants and to other food-conscious customers wanting a more flavorful pork product.

Despite the solid reputation the woolly pig’s meat has earned, little to no research has been conducted in the U.S. on how to best raise and harvest the animals, Brandebourg said. In fact, Auburn is the only college in the U.S. with a purebred Mangalitsa research herd.

Currently, producers are following what they read on the internet, taking chefs’ advice and making educated guesses about how to raise their pigs, said Brandebourg.

“Chefs are willing to pay a lot for them, but the problem is that the pigs’ growth and body composition and meat quality at any given age in their production cycle has not been characterized,” he said. “In order for a chef to buy into Mangalitsa, he needs to know, if I’m going to buy this animal, I’m going to have this consistently reliable, high-quality product, because he can’t lose customers.”

Brandebourg is trying to find the Mangalitsa’s “optimal endpoint,” the weight at which pork quantity and quality is maximized for the money the farmers invest in their pigs. As the pigs grow past this point, muscle growth tapers off and additional gained weight is mostly from fat. While the Mangalitsa is prized for its marbled pork and rich lard, the amount of fat becomes disproportionate as the pigs grow heavier.

Chefs can only use so much lard per pig. Producers regularly raise their woolly pigs to 300-400 pounds. Based on data the Mangalitsa research team has collected so far though, Brandebourg highly suspects that producers are “throwing money down the drain” and shooting far past the optimal endpoint.

“I think producers are making their pigs way too fat,” he said. “And it’s actually hurting their ability to build these strong relationships with chefs.”

Brandebourg never intended to investigate the production aspect of Mangalitsas. He originally became interested in woolly pigs as a biomedical model to study human obesity, since the breed was the most obese he could find. One of the first people to import Mangalitsas to the U.S., and the first to import them for research purposes, Brandebourg—working closely with swine unit director Brian Anderson—developed a research herd and studied diabetes in the pigs for many years after importing his first animals in 2010.

But then, the phone calls started.

How should you feed Mangalitsas? When do you harvest them? What will their pork chop look like at a given age? As the only researcher in the country with woolly pigs, Brandebourg was and

is flooded with calls from producers asking questions like these. He recognized the pressing need for data on the breed when he came up blank.

“I can’t answer them,” said Brandebourg. “There is no answer. So that’s why we’re doing [this study].”

Once the leftover feed collection and measuring is completed, the team begins letting pigs out of their pens one at a time to weigh them. The students patiently herd the Mangalitsas into a weigh box, which looks like a narrow pen with a scale for a floor. After being allowed to eat as much as they want all week, the pigs are weighed every Monday.

The research pigs are harvested over the course of the study at six different weight classes, ranging from 75 to 275 pounds. Each pig is grown to a certain weight class and harvested so that all the classes are filled evenly. If a pig fits into their weight class during the Monday weighing, they’re slotted for harvesting that week. The researchers can then compare the quality of the pork and the quantity of meat vs. lard at the various harvest weights to get a better idea of the optimal endpoint for Mangalitsas.

“What we’re doing here is characterizing how fast they grow and what they look like at different time points as they age,” Brandebourg said. “We know what their live weight is, how much they’re eating, how fast they’re getting there, and then we know what their pork chop looks like. So we can tell people, if you feed them this way, this is what the product you’re going to sell is going to look like.”

One pig is hesitant to step into the scale box when it’s his turn to be weighed.

“He’s like, ‘I don’t want to go in there because if I weigh right, I get turned into bacon,’” one of the students said with a laugh.

The students take their time coaxing the pigs into the scale box, using a plastic sorting board to block them from running the other direction.

“I really love your patience, and I love how stress-free you were doing that,” Brandebourg tells a student as she slowly but steadily herds a pig toward the scale.

These pigs may be destined for slaughter, but the research team— gives the Mangalitsas a high quality of life while they’re in the barn. Brandebourg teaches the students how to care for and handle the pigs with as little stress as possible. He prioritizes chances for the students to learn and believes it’s important for undergraduate students to get involved in research and for faculty to create opportunities for them to do so.

“He’ll just, out of the blue, tell you random facts that you need to know,” Reeves said. “And then, if you ask him a question, he’ll tell you all about it.”

Since many of the undergraduate students on the team are aspiring veterinarians, working with the woolly pigs gives them valuable hands-on experience. But Brandebourg said it’s not just the students that benefit from helping out, but the research itself as well.

“The data quality is so much higher through their efforts,” said Brandebourg. “Actually, they make my life better just getting to know them and interact with them. They’re like sponges. They want to learn, and it is so fun.”

Balancing research duties with school, especially for typically coursework-heavy pre-veterinarian majors, can be a challenge for the students. Hannah Szarenski, a pre-vet senior, said she’s had some late nights and early mornings, trying to fit it all in, but volunteering has taught her time-management skills and has prepared her for the realities of a career as a veterinarian. Working with the Mangalitsas, she said, is well worth it.

“Once you work with them, you kind of get your favorites, and you want to know how they’re doing,” Szarenski said.

Animal sciences master’s student Courtney Charlton is one of the more heavily involved team members, typically helping out at the barn seven mornings a week. She also works closely with Lambert-Powell Meats Lab manager Barney Wilborn and fellow graduate students Shannon Wilkerson and Jack Rehm to collect the meat-quality data once the Mangalitsas are harvested.

After the pigs are weighed each Monday, the team selects a few that fit one of the weight classes and sends them to the Auburn meats lab for processing.

Each carcass is divided into the different primal cuts of meat, like the ham, shoulder and loin. Charlton examines the cuts for quality and records values such as color, marbling and muscle score. She measures the lean meat and fat percentages of each cut and can use these values to determine the ratio of lean meat to fat on the pigs in each age class. These data indicate at what age class Mangalitsas reach their optimal endpoint, with the highest quality pork and best meat-to-fat ratio.

“We’ve trying to see which weight is ideal to send over to processing for the best marbling in the meat, just to get a better-quality product at the end,” Charlton said.

Brandebourg said the data collected so far suggests that the Mangalitsa’s optimal endpoint is indeed at a much lighter weight than what most producers are raising the pigs to. Just how much lighter?

Brandebourg will soon have answers for the producers calling him. For the first time, farmers will have data on Mangalitsa pork quality and growth. The study results present insight into better Mangalitsa management practices and could change how producers raise, harvest and market their woolly pigs.

“It’s going to be a really important extension and outreach tool, so now that we can publish a paper and say, see, this is what they look like,” Brandebourg said. “You know your quality endpoint. Now you don’t have to guess anymore.”

Some of the students have to leave the barn before the Monday Mangalitsa weighing is completed in order to make it to their 8 a.m. classes. With the data they’ve collected for the morning captured on a datasheet, they change out of their scrubs and muck boots, switching from researchers to college students.

When the remaining team members herd the last pig out of the scale box and back into its pen, they measure six pounds of food into each pig’s feed trough. Tomorrow morning, they’ll be back to vacuum up the leftovers. 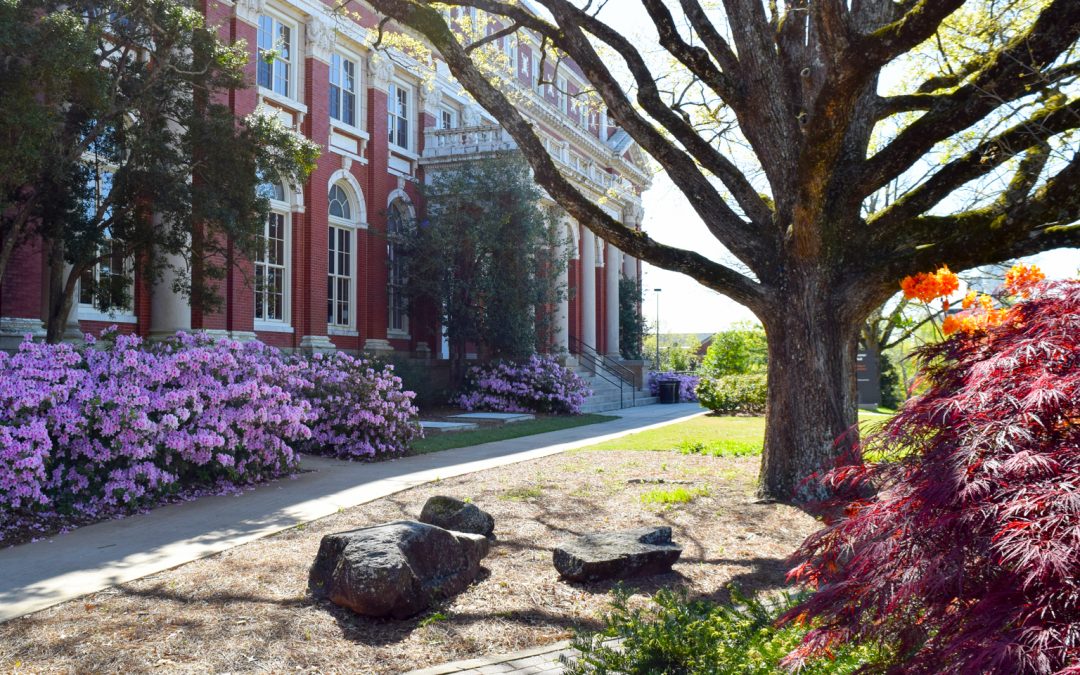