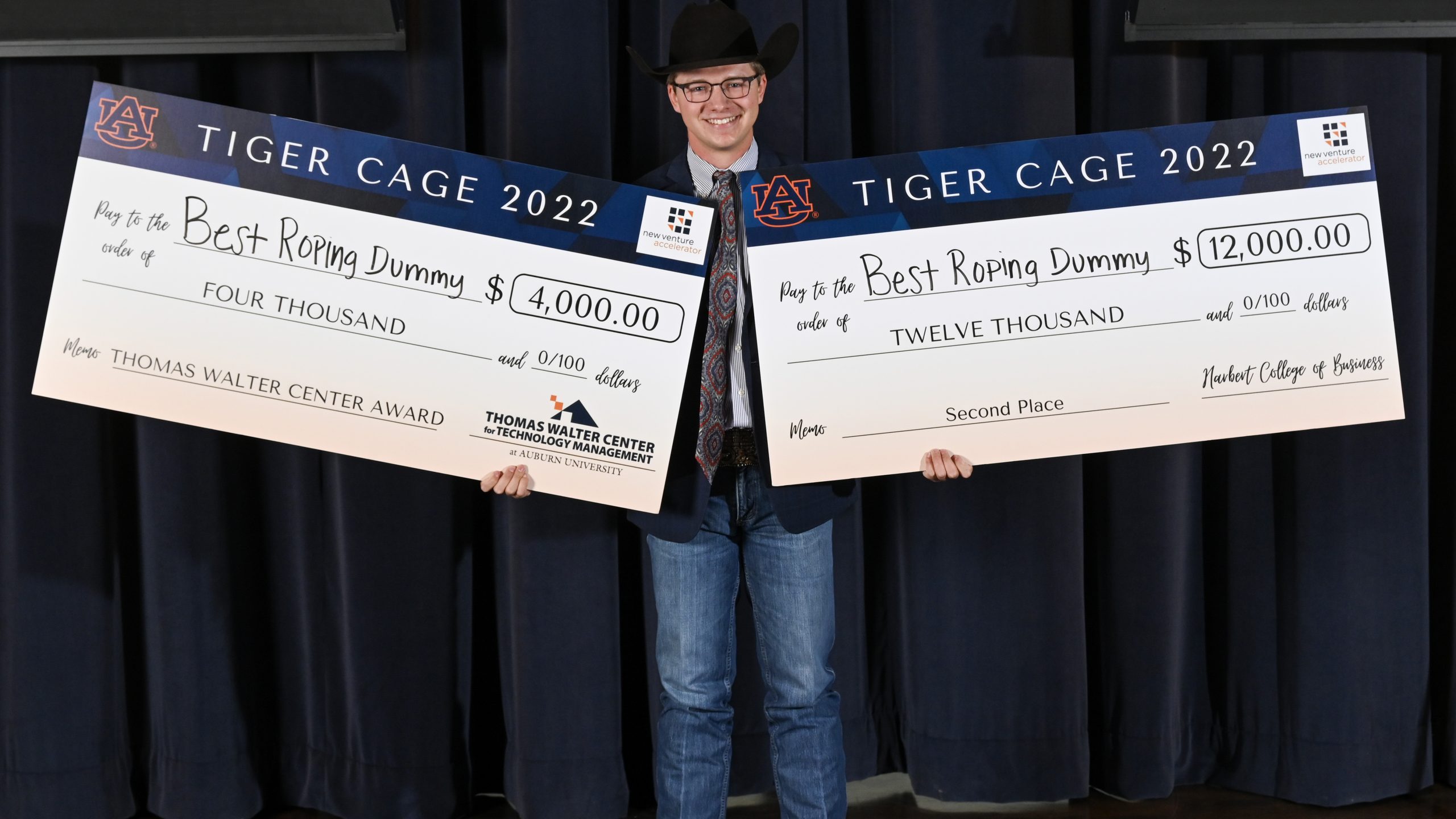 Not every Auburn University senior receives thousands of dollars in startup capital prior to graduation.

But Will Jordan is not your average senior.

Jordan was the second-place finisher in the Tiger Cage Business Idea Competition, an annual program for student-led business startups that — at first glance — seems to be modeled after the reality television show Shark Tank. But it is much more than that. Tiger Cage also builds skills, strengthens experiential learning and prepares students to be ready to join and change their industries upon graduation.

This year, 18 student businesses were whittled down to four who competed in the final round on Friday, March 25. Jordan’s second place finish secured him $12,000 in startup capital. He was also the recipient of the Thomas Walter Center for Technology Management Special Award for an additional $4,000.

His startup, The Best Roping Dummy, is an autonomous team roping training system that reduces the need for live cattle and improves practice capabilities for team ropers.

Team roping, also known as heading and heeling, is a rodeo event that features a steer and two mounted riders. It is highly competitive and a singularly important competition as the only rodeo event where men and women compete equally together in professionally sanctioned competition.

Stakes are high for team ropers, who can earn hundreds of thousands of dollars in a competition that lasts but a few seconds.

“Current team roping training systems or dummies are pulled by a four-wheeler and their horns fold up when you rope them,” he said. “But you know, that’s not what live cattle do.”

The Best Roping Dummy would offset the costs of keeping cattle for practice purposes while offering a better practice experience for those who practice with current dummies. 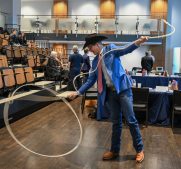 Will Jordan of The Best Roping Dummy shows off his roping skills during a break as eight student-led teams participate in the Tiger Cage Business Pitch Competition Friday, Feb. 25, 2022, in Auburn, Alabama. (Photo by Julie Bennett)

Jordan was inspired by the growth and demand for autonomous lawnmowers in the industry. He reasoned that similar technology could be applied to the demand for better quality team roping dummies.

Team roping has grown in the last decade. Nationwide, more than $70 million is paid out annually in recreational prize money for the event with more than an estimated 300,000 competitors in the sport, according to Jordan.

“It is one of those things that you look at and say, ‘Hey, this is a growing market,’” he said. “What can I do with that?”

Rodeo is home for Jordan, whose family runs a rodeo and is immersed in the industry. Jordan has dabbled as a rodeo clown and entertainer at rodeos throughout the Southeast and has worked with his brother to put on goat ropings for kids.

And in many ways, he was right at home in the Tiger Cage, where his experience as an entertainer and his education as an agricultural communications major both came into play.

“It is essential to have a product and develop that product,” he said. “But unless you can take that product to the market, what good is the product? That’s one of the things I’ve learned here. Sales and marketing are essentially leading people to a decision. It all comes back to effectively communicating what you have and how it fits the needs of your customers.”

The Best Roping Dummy is not Jordan’s first foray into entrepreneurship. The Clay County native started his first business selling locally produced beef before it was trendy, and he owns a business producing toy lassos for aspiring little ropers. Today, his red, white and blue trick ropes are for sale at the Dixie Stampede at Dollywood and rodeos across the nation.

“If you’ve been to the Dixie Stampede and seen those ropes, that is my business,” he said.

Jordan said he is excited for the opportunity to expand his portfolio through The Best Roping Dummy and to use the startup capital to begin building a prototype.

“Participating in the Tiger Cage has been an incredible and rewarding experience,” he said. “I have always been an entrepreneur, yet this competition has pushed me to hone my business and pitching skills. I would encourage anyone with an idea to give this program a shot; the work is worth the reward.”

Jordan almost didn’t give the competition a shot this year. He decided only a few days before the submissions were due that he wanted to enter this year, and he initially did not advance to the semifinal round. But when another competitor had to drop out, Jordan secured their spot.

“I went from that to, well, being in the final round,” he said. “It’s been incredible. Some of these teams have been working on their pitches for years. It’s truly been a blessing to witness their efforts as well.”

Tiger Cage is organized by the Harbert College of Business but open to students in any Auburn college or school. Jordan said he was thrilled by the reception to his idea at each stage of the competition, and he attributed some of his success to the fact that he brought an agricultural product to the business competition.

“It’s different,” he said. “It’s just different. Plus, it doesn’t hurt wearing a cowboy hat to a business pitch.”

In a groundbreaking, first-of-its kind event, university scientists, engineers, producers, government agencies and industry officials from throughout the Southeast met at Auburn University to brainstorm ways to use artificial intelligence to help farmers. The bottom...