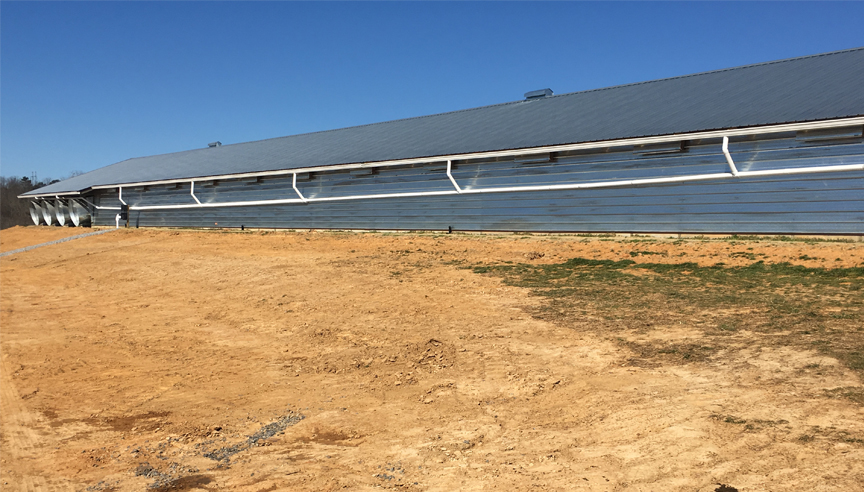 Raising broiler chickens takes water—a lot of water. But rainwater harvesting could substantially reduce Alabama poultry growers’ dependence on municipal water sources or well water, reduce growers’ annual water bill by as much as $16,000 or more, and pay for itself in as few as four to five years.

Gene Simpson, a professor in the Department of Agricultural Economics and Rural Sociology and a specialist with the Alabama Cooperative Extension System, says that a typical farm with four poultry houses uses between 1.8 and 2 million gallons of water every year.

“If they are using water from a municipal water system, a four-house farm has a water bill that could be as high as $22,000 annually,” said Simpson, who is also the associate director of Auburn University’s National Poultry Technology Center. “That is a direct, out-of-pocket expense to growers.”

Simpson said the NPTC has been investigating the merits of rainwater harvesting for poultry operations for about seven years.

“Our goal then was to develop ways that producers could reduce their reliance on municipal water sources by 80 percent or more.”

NPTC’s most recent prototype was placed on a farm in Cullman County.

Simpson noted that harvesting and storing thousands of gallons of water is significantly more complex than the gutter and rain barrel system with which many homeowners are familiar.

A gutter system funnels rainwater from the poultry house roofs into a 100-foot by 36-foot flexible bladder. A 2-inch rain on the 82,000 square feet of roof space will fill the bladder to its 100,000-gallon capacity. A control room pumps the collected water to the houses as needed and will automatically switch over to municipal water in the event of an emergency.

Just as important as the volume of water is the quality of water. The growing birds need clean water free of impurities and the houses’ cooling systems need water low in dissolved minerals to work efficiently.

“The water quality is excellent,” said Simpson. “It is filtered multiple times including through an ultraviolet light filter that kills any bacterial contamination.”

Alabama Extension Director Gary Lemme says Extension and the NPTC’s work with poultry producers is important to the entire industry.

“The Center’s mission is simple—help poultry producers raise a quality product profitably,” said Lemme. “And they are fulfilling that mission every day with their innovative work.”

Paul Patterson, dean of the Auburn University College of Agriculture and director of the Alabama Agricultural Experiment Station, agrees with Lemme.

“The rainwater harvesting project is just one example of how the Alabama Agricultural Experiment Station and the NPTC provide timely, applied research to help improve the profitability and environmental sustainability of our poultry industry,” said Patterson.

Simpson and his colleagues believe that the new system could help producers reduce their municipal water bills by as much as 90 percent. While the systems are a significant capital investment, he said farms should expect the system to have paid for itself in about seven to eight years.

“But if the U.S. Department of Agriculture’s Natural Resource Conservation Service were to develop a cost share program, the system would pay for itself in as little as three and a half to four years.”

Simpson says rainwater harvesting is a strong option for growers who have high water rates, have a low availability of well water or have water with significant quality issues.