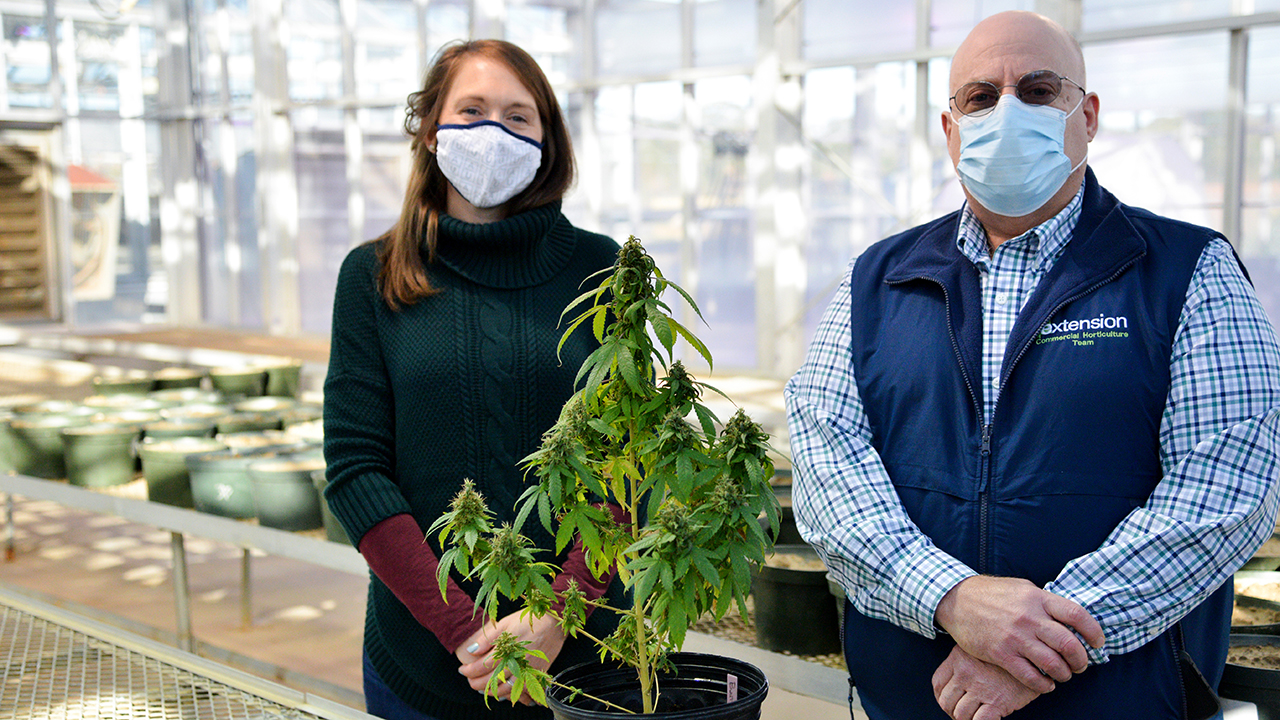 From exploring the viability of new crops such as hemp and grapes to protecting traditional crops such as peanuts and cotton, the College of Agriculture’s Production Agriculture Research, or PAR grants program, is working to provide immediate solutions to stakeholder-identified problems in Alabama.

Established in 2017, the PAR program already has resulted in significant outcomes, including the development and implementation of new research innovations and increased partnerships with stakeholders, said Henry Fadamiro, associate dean for research for the College of Agriculture and associate director of the Alabama Agricultural Experiment Station (AAES).

“PAR grants have been used to leverage extramural funding from federal agencies, commodity groups and other sources,” Fadamiro said.

The grants are administered through the AAES with USDA National Institute of Food and Agriculture Hatch funding and matching state appropriations. Many of the two-year, $50,000 PAR grants support combined research and extension projects to address current farming problems in a timely manner through applied research.

One of these projects marks Auburn’s first foray into hemp production research. With the 2014 Farm Bill, many states began producing hemp for fiber, grain or flower. Additionally, the 2018 Farm Bill listed hemp as an agricultural commodity, leading to even more states, including Alabama, signing on to grow hemp.

The problem in Alabama and elsewhere is that there has been little to no research conducted on hemp in the last several decades, so available information is limited.

Local producers have lamented the lack of management recommendations for this “new crop,” Kesheimer said.

“The project grew one acre of CBD hemp at E.V. Smith Research Station with multiple varieties donated from a Southeastern hemp company,” she said. “We examined two variety’s response to differing nitrogen treatments, as well as two varieties at different plant spacing.”

The work will continue through the winter at the Plant Science Research Center in Auburn with phytotoxicity studies, pesticide efficacy work and propagation work.

Another relatively new crop to Alabama — European grapes — is getting a close look for its potential as a profitable crop in the state.

“Alabama has the potential to greatly benefit from a strong grape industry that generates value-added products and encourages agritourism,” said Elina Coneva, professor and extension specialist in the Department of Horticulture. “European grape production has the potential to provide millions in additional jobs and income to rural communities, which can result in enhanced sustainability for local communities.”

The purpose of this research project is three-fold, Coneva said, beginning with exploring the yield potential and the fruit quality characteristics of innovative, predominantly European grapes possessing superior resistance to Pierce’s Disease, a serious threat to the cultivation of grapes in the United States, especially in the warmer Southern regions.

PAR grant funding also will be used to develop strategies for battling Palmer amaranth pigweed, an extremely hard-to-control weed in row crops due its fast-growing habit, its ability to produce up to a half-million seeds per female plant, and its high water-use efficiency.

“It constantly evolves resistance to herbicides, making it nearly impossible to control in peanuts by herbicides alone,” said Steve Li, extension specialist and assistant professor in the Department of Crop, Soil and Environmental Sciences.

“In a recent survey conducted in spring of 2020, 473 out of 632 row crop growers in Alabama indicated that Palmer amaranth is their worst pest to control on the farm,” Li said. “Also, 275 growers expressed interest to continue learning Palmer amaranth management practices and updates from Auburn research in future.”

Li and his project team will evaluate effective methods to control multiple herbicide-resistant Palmer amaranth in peanuts with integrated management strategies and examine how much irrigation and soil nutrients are lost to Palmer amaranth during weed-crop competition in an infested row-crop field.

Yin Bao, assistant professor in the Department of Biosystems Engineering, is spearheading a research project that aims to increase the productivity and revenue of the state’s commercial forest tree nurseries.

Alabama is the fourth largest producer of conifer seedlings in the United States, with close to 91 million seedlings produced per year. Accurate seedling inventories are crucial to commercial forest tree nurseries, especially for planning of stock shipments and outplantings.

“Currently, seedling inventories are performed manually on a large scale in each nursery,” Bao said. “But this process is labor-intensive, time-consuming, error-prone and ergonomically poor for workers.”

In this PAR project, Biosystems Engineering is teaming up with the Southern Forest Nursery Management Cooperative in the School of Forestry and Wildlife Sciences with the goal to automate seedling inventory for bare–root pine seedling production.

“Our team will develop and evaluate a vision-based robotic system to detect and geo-reference individual seedlings,” Bao said. “The system will be powered by the state-of-the-art computer vision and deep learning techniques for visual perception of seedling stems. Compared to the current practice, the proposed system is expected to obtain more accurate inventory in less time with minimum labor.”

Animal science research through the PAR program will focus on increasing the knowledge and awareness of tall fescue toxicosis and developing economic mitigation strategies for Alabama cattle producers, said Leeanne Dillard, assistant professor and extension specialist in the Department of Animal Sciences.

“Heifer development is an essential part of cow-calf production, the largest sector of the almost $400 million beef cattle industry in Alabama,” Dillard said. “Two-thirds of Alabama uses ‘KY 31’ tall fescue as the major pasture species. While it is a versatile plant with desirable characteristics, its symbiotic relationship with an endophytic fungus can be harmful and costly to livestock.”

It is estimated that tall fescue toxicosis costs U.S. livestock producers more than $1 billion each year, the most expensive disease in the beef cattle industry, even though it is grown in only 13 states, she said.

Fescue toxicosis causes reduced animal gains and pregnancy rates, heat stress and decreased feed intake in cattle. Reducing or eliminating tall fescue toxicosis is important for the sustainably and economic viability of Alabama beef producers, especially in livestock that are more susceptible to stress, such as replacement heifers.

“However, replacement of ‘KY31’ tall fescue in pastures is costly, and not cost-effective for most Alabama cattle producers,” Dillard said. “The objective of the proposed study is to compare effects of different grazing strategies of cool-season annuals with grazing of ‘KY 31’ tall fescue with and without supplementation on beef heifer development.”

Another unique PAR project will examine how the social media channels Twitter and Instagram, as well as video, can be harnessed to more effectively communicate publicly about animal agricultural production to influence perception and counter anti-animal agriculture propaganda.

“A host of issues challenging the public’s trust in animal agriculture are heading toward the industry like a freight train,” said Don Mulvaney, associate professor in the Department of Animal Sciences who is leading the research.

“For example, segments of society are questioning the welfare of animals in production, whether or not types of dietary meat consumption has a negative impact on personal health, and the environmental sustainability of producing livestock. Associated science issues include carbon neutrality, water usage, available labor, foreign trade rules, chemical usage, gene editing, GMOs, traceability, biosecurity, deforestation and others.”

Because most Americans are three or more generations removed from production agriculture, they have minimal incentive to question the unsubstantiated statements purported by anti-animal agriculture groups, Mulvaney said.

Consequently, a gap has emerged and is widening between those in production agriculture and those in a non-ag category. “The beef industry may be at risk of losing some of its social license, an informal license granted by the culture based on what it accepts, expects or demands,” he said.

Communication approaches need to be adapted to reflect the circumstances that prevail, Mulvaney said. Members of non-ag and ag segments need animal production information that is factual and scientifically supported as well as emotionally satisfying.

“Quantitative and qualitative research results will give an indication toward tribal views and influenceability by assessing how the public engages in daily posts about animal agriculture and provide indication of how and where the agricultural industry should design meaningful messaging for improved perceptions,” he said.

The titles of and lead investigators on the six remaining projects that received 2020 PAR grants follow.