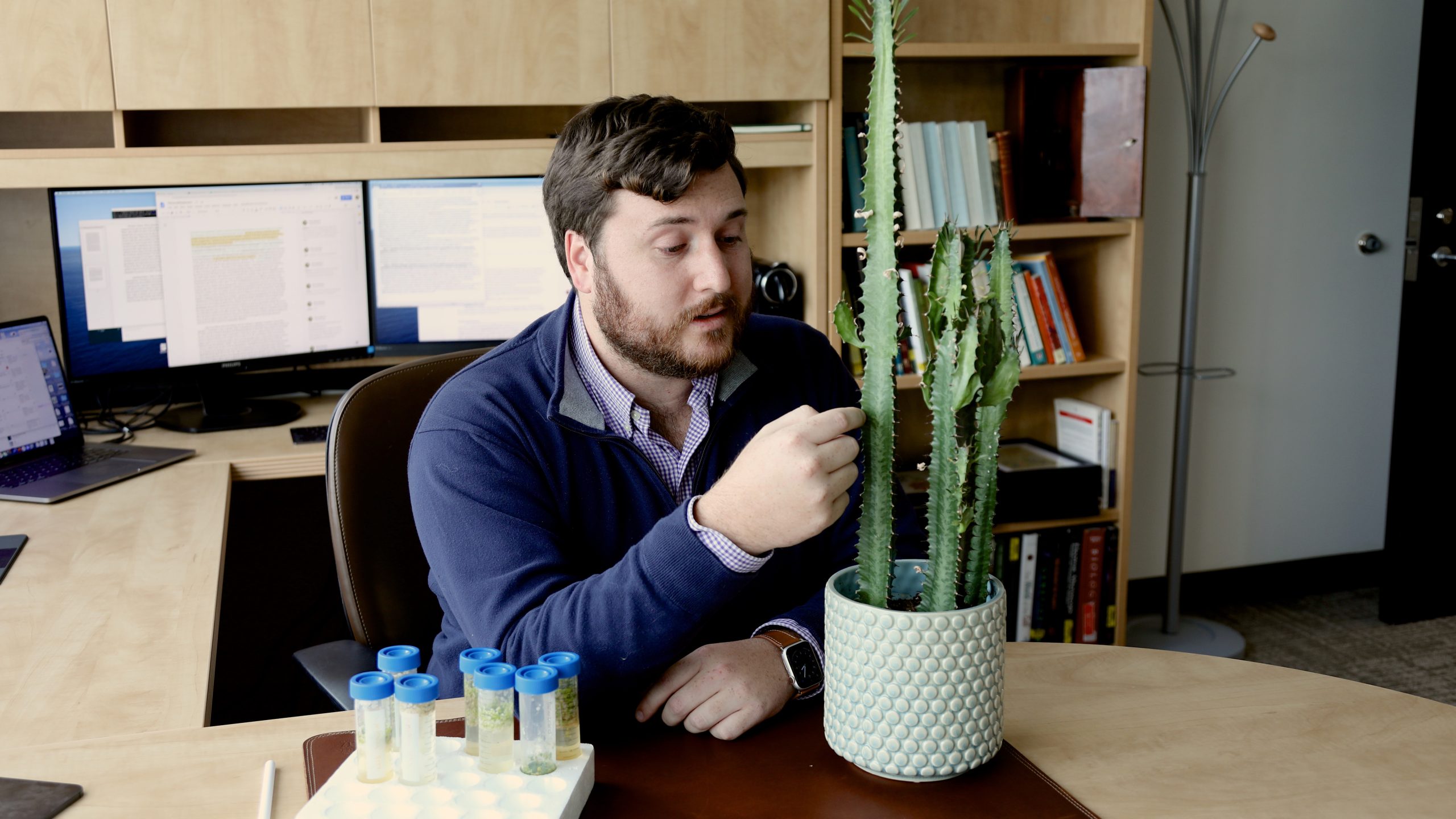 In 2020, Auburn’s College of Agriculture hired a historian and storyteller, although his resumé says he’s a geneticist. He was hired to help partner Auburn’s strength in plant breeding with the genome-sequencing renown of Huntsville’s HudsonAlpha Institute for Biotechnology, founded in 2005 to apply genomic research across a variety of fields, such as human health, medicine and agriculture. On any given day, you can find the new Auburn assistant professor and HudsonAlpha faculty investigator, Alex Harkess, in his lab, where he traces the past, down to every nucleotide, to help build the future for Alabama farmers.

Harkess has loved plants, nature and the great outdoors since childhood. As a middle-schooler, he was a youth leader for the Jane Goodall Institute’s Roots and Shoots youth outreach program, and as an incoming freshman at Miami University of Ohio, he was prepped to pursue a career in environmental law. Then a 30-minute conversation with a botany professor changed everything.

“He described to me why he was a botanist. He said that botany is not just a study of science, but it’s actually a study of history,” Harkess said. “I found it so incredibly charming that, using modern molecular tools in combination with old-school botany, we can become historians for organisms that cannot write their own stories.”

The stories that Harkess started writing are called genomes, an organism’s complete set of genetic instructions. Each chapter of each genomic story is called a chromosome, each paragraph is called a gene, each gene is composed of words called DNA, and each word is spelled with only four letters — G, C, A and T — called nucleotides.

But mastery of language and composition isn’t all that goes into writing a great story. All the best storytellers write from experience. They write what they know, what they have lived. And their stories often are packed with wisdom we all can use for centuries or millennia to come.

It’s the same for plants, Harkess said, whether it be a daffodil, an oak tree or a field of peanuts.

“I’m an evolutionary biologist, so I think about agriculture from a very different perspective,” he continued. “Plants have already faced many of the struggles that we’re trying to solve today in modern ag. Plants have evolved adaptations that allow them to grow in difficult places on the planet — without water or with low amounts of nutrients, for example.”

The key for us today, he said, is to identify and construct the order — or sequence — of the words, letters, paragraphs and chapters those plants give us. From that sequence, we can read in detail why a plant can survive without water or why it is more prone to particular pests or diseases. With that knowledge, we can then, at a precision level and an expedited rate, begin breeding hybrids for select strengths and qualities.

Harkess is one of five HudsonAlpha faculty investigators focused on agricultural issues. While he holds a tenure-track faculty position in Auburn’s Department of Crop, Soil and Environmental Sciences, the other four also are affiliate faculty members of the department. From their HudsonAlpha labs, they collaborate with scientists on Auburn’s Ag Hill to tackle a broad range of challenges faced by Alabama crops, from drought and disease to pests and soil quality. Together, they are using historic plant data to tailor new crop varieties to the unique environments faced in Alabama.

While these Auburn-HudsonAlpha collaborations are still new, the goals are clear: to quickly improve current Alabama crops, like cotton and peanuts, while introducing new varieties, like barley and black beans, that could thrive in Alabama growing conditions.

Josh Clevenger is a HudsonAlpha faculty investigator focused on peanut. He works closely with Auburn Professor Charles Chen, a world-renowned peanut breeder known most recently for AU-NPL 17, a drought-resistant peanut variety that comes with the added health benefit of a high oleic acid profile. Chen and Clevenger have partnered to produce a new variety that boasts the strengths of AU-NPL 17 — and more.

Using light- and climate-controlled indoor growing rooms, Clevenger and his lab team quickly grow these breeding lines and then cross them with a line that brings other qualities, such as drought resistance. They take the seed from that new hybrid and then sequence its genome, constructing every word, letter, paragraph and chapter of the plant’s genetic story. With that story now spelled out in detail, Clevenger can select the pieces of DNA that make the plant disease resistant, grow a new line from the DNA and then cross it again with the drought-resistant line.

“We can actually do that all within one year’s time,” Clevenger said. “We do this integration very fast, very rapidly, and give those new lines to Charles. He puts them out in the field and picks the best ones.”

You could call it rapid variety development.

“What’s really cool about these lines we’re working with now is that Charles had already done a lot of selecting on them, so they were really excellent lines already,” Clevenger said. “We’re just adding that cherry on top or, in some cases, a couple of cherries on top.”

Chen and Clevenger are not the first scientists to use molecular data in peanut breeding. However, Clevenger’s lab is the only peanut lab with rapid-sequencing capabilities, he said.

“What Charles and I are doing is unique.”

Meanwhile, Harkess and his lab team are not focused on just one crop or one challenge or set challenges. They’re trying to develop a totally new system of hybrid crop breeding.

The fundamental concept of hybrid crop breeding, of course, is to take the pollen from the flower of one crop variety and put it on the pistil of another to produce a plant that, hopefully, will be bigger and better than its parents.

“This revolutionized food production in our country and, frankly, saved billions of lives around the world, especially with crops like rice,” Harkess said.

“We’re very interested in taking lessons from the history of evolution, identifying how plants have already evolved to create separate sexes,” Harkess said. By doing this — and thereby finding the genes that control maleness and femaleness in flowering crops — his lab hopes to develop new methods that could turn any crop system into a potential hybrid crop system.

“Breeding certain crops, like soybeans, is actually very difficult because they produce hermaphroditic flowers, and they pollinate themselves before the flower even opens,” he said. “What if we could change that system entirely? What if we could create soybeans that have separate sexes so that we could use bees to pollinate them in the field to make new hybrid crops that have never existed before because of the limitations of the flower?”

In situations like this, it helps to think about plants in the context of time and how they’ve evolved over the ages. Again, they’ve already faced many of the challenges we think are new.

“Humans started farming only about 10,000 years ago. It’s a blink of an eye relative to how long plants have been on this planet,” Harkess said. “The tools we’re using now enable us to see this and observe and think about how plants have changed over time and adapted to a planet that is always changing, as well. The plants we’re growing today have already seen and experienced so much.”

And experience, we know, makes for some of the best stories. We just need to listen and learn. 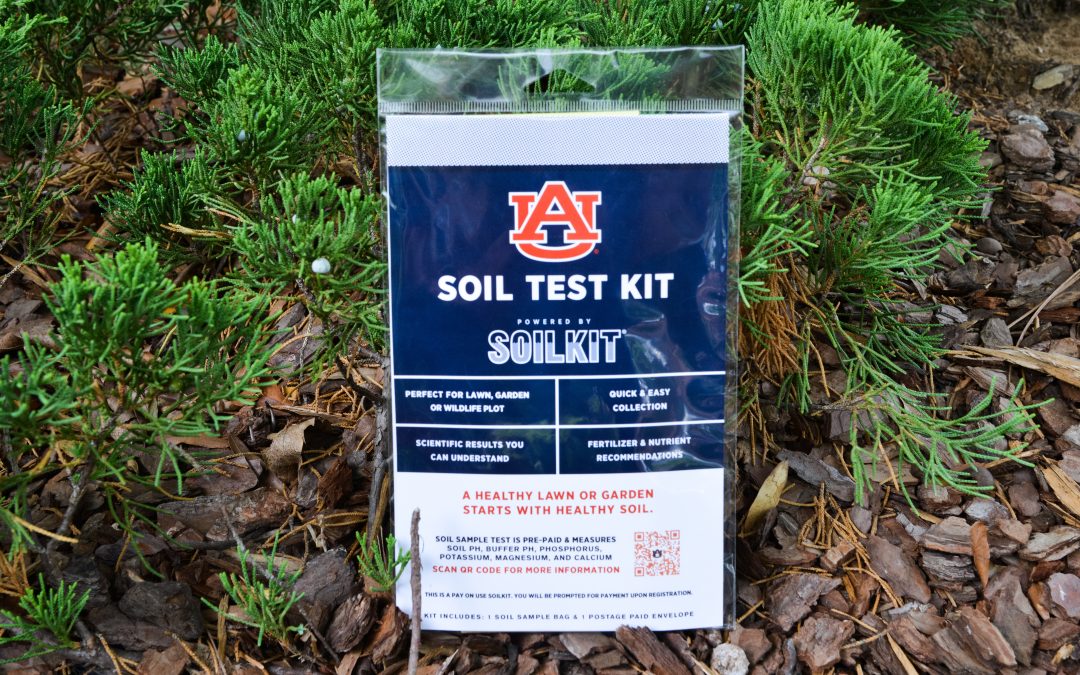