Auburn researchers will use an almost $321,000 U.S. Department of Agriculture grant to field-test a novel vaccine that would effectively and economically control one of the most serious bacterial infections in the aquaculture industry today.

Columnaris disease can affect nearly all freshwater fish species and causes millions of dollars in annual losses in the catfish industry alone. The sole columnaris vaccine currently available is only moderately effective, but Auburn University researchers have been working on an improved immunization using bacteria derived from a highly virulent strain of the disease.

In lab tests, the experimental vaccine that Auburn fisheries, aquaculture and aquatic sciences professor Cova Arias has developed and patented has outperformed the vaccine now on the market.

“At this point in our research, we need data on a larger scale to successfully commercialize the vaccine,” Arias said. “We will use this most recent grant to fulfill our gap of information.”

Arias was awarded the competitive grant in November through the Aquaculture Research Program, which is administered by the U.S. Department of Agriculture’s National Institute of Food and Agriculture, or NIFA. The research program funds projects that support the development of environmentally and economically sustainable aquaculture in the U.S.

“If you’ve ever had a goldfish to die, it probably died from this disease,” she said. “It affects ornamental species, catfish, tilapia and trout, and it is distributed worldwide.”

For catfish farmers, fish diseases can be economically devastating, and columnaris bacteria is one of the three main disease-causing pathogens.

“In some years, columnaris is the No. 1 disease problem in catfish production, and in other years, it’s No. 2, depending on the individual farm and the season,” Arias said. “In hatcheries, disease can kill 90 to 100 percent of the fish. When fish are sick and fighting a pathogen, they won’t eat properly, so an effective vaccine can increase survival and growth performance.”

The Auburn vaccine has outperformed the commercial vaccine in all experiments conducted to date, reducing cumulative mortality two to four times better than the existing vaccine. In vaccine trials of Nile tilapia and catfish, the vaccine increased survival rates by 66 and 17 percent, respectively, over the currently available vaccine.

It’s a proven vaccine in the lab, but there are many more variables on a larger scale.

The first objective of the funded research is to identify the best methods for administering and storing the vaccine.

“Our formula now is administered by bath or immersion, and that’s easy to do when fish are small and are transferred from the hatchery to the farms,” Arias said. “But the best immunization method is to wait until the fish are mature and then boost them a couple of months before the disease shows up.

“We know columnaris peaks in mid- to late spring and then again in early fall, so ideally, you could give fish a boost a couple of months before temperatures rise,” she said. “The best way to do that is to add the vaccine to the feed.”

Storage of the vaccine is also a critical area.

“The commercial vaccine currently available is a modified live vaccine that has to be kept frozen,” Arias said. “We have developed some storage solutions, or buffers, that, based on the data, will allow us to store the vaccine at room temperature.”

This will help make the vaccine more cost effective and readily available to farmers, she said.

The next objective is to move the vaccine into the field and conduct controlled experiments in ponds.

“We’re taking fish from 10- to 20-gallon tanks in the lab to a tenth-of-an-acre pond,” Arias said. “It still will be relatively controlled conditions, but we’ll do side-by-side comparisons between our vaccine and the commercial vaccine.”

Lab experiments are continuing this year and will move into the field in 2019, she said.

“We completed the safety studies on the vaccine, and we know it is safe and stable,” Arias said. “We’ve checked all the USDA ‘boxes,’ but we still have to prove it works in field conditions. We’ll continue adjusting the formula and the delivery.”

The project’s third goal will be a collaboration with Auburn fisheries professor Terry Hanson. An aquacultural economist, Hanson will conduct an economic analysis and economic feasibility study of the vaccine in comparison with the commercial vaccine.

Arias said there has been an interest in the vaccine among aquatic health companies.

“Ideally, a commercial entity will take it from there,” she said. “Then, the company will either contract it out or make the vaccine itself.

“Or, if no companies are interested, we may be able to work directly with farmers and produce a vaccine for them. Realistically speaking, we’re probably looking at making it available to farmers in the next five years.”

Arias was not the only Auburn School of Fisheries, Aquaculture and Aquatic Sciences faculty member to be awarded a grant in the NIFA Aquaculture Research Program’s latest round of funding. Alan Wilson, associate professor and aquatic ecologist, received a $261,613 grant to fund his research on biological manipulation of the aquatic food web to sustainably manage toxic and off-flavor-producing cyanobacteria in commercial catfish aquaculture.

In his research program at Auburn, Wilson conducts research on the abiotic and biotic mechanisms that mediate the promotion or control of harmful algal blooms and taste-and-odor events in aquaculture ponds, recreational reservoirs and drinking water reservoirs. 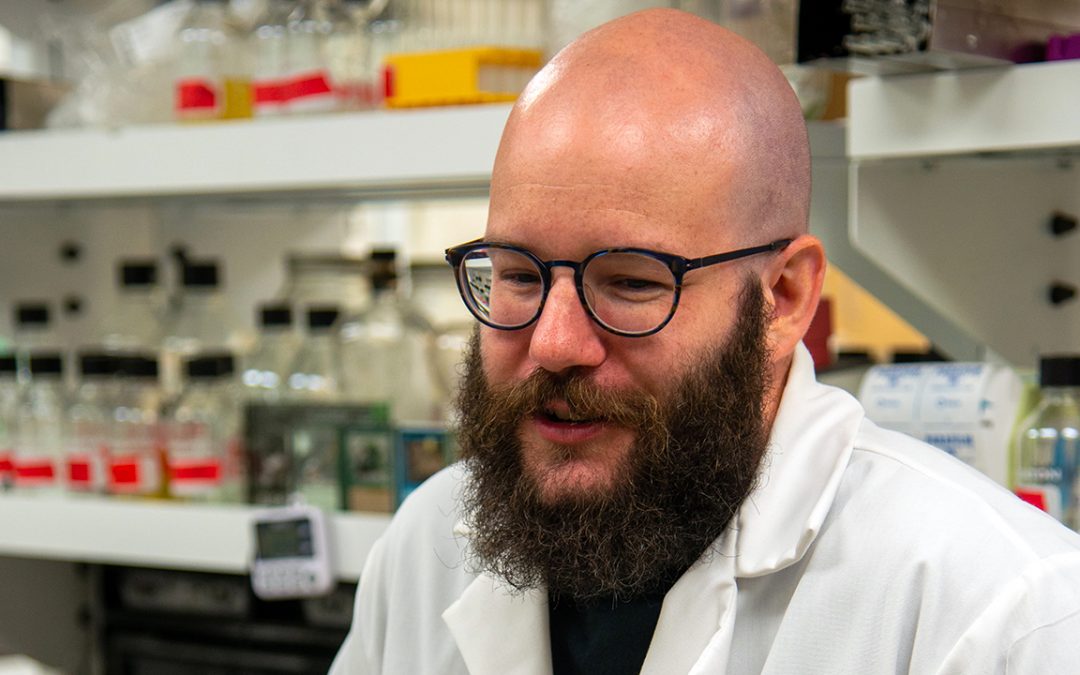