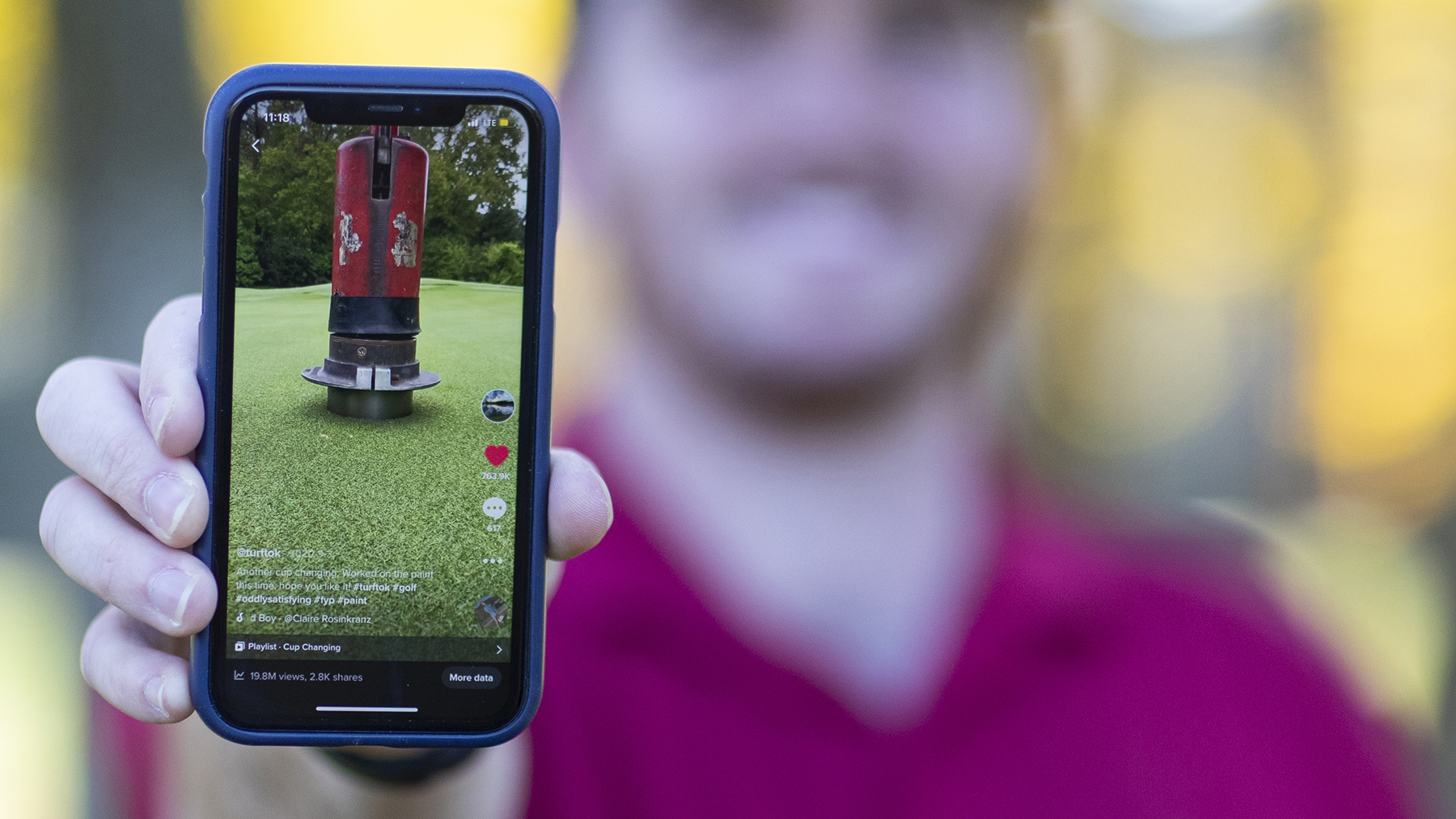 It is no secret that social media has greatly influenced the world as we know it today.

But perhaps less known is the daily impact social media has on the agriculture industry.

Auburn University graduates Daniel Johnson and his wife Amanda are an example of just that. The couple uses social media, their undergraduate experiences and their careers to educate the public about agriculture.

Daniel Johnson, a 2017 graduate who majored in agronomy and soils in the turfgrass management track, currently works as a golf course assistant superintendent at Settindown Creek Course of Ansley Golf Club in Roswell, Georgia. He uses one of the newest social media apps, TikTok, to create appealing video content that promotes agricultural practices used on golf courses.

“I don’t think many people realize how much agriculture is involved with the game of golf,” he said. “So, I try to show off what takes place on the golf course such as aeration, spraying and mowing.”

“The very first video I ever posted that went viral was a zoomed in video of the golf cup changing process,” he said. “It got a lot of comments from people expressing that they never knew how cup changing took place.”

With clever captions such as “mowing tees like it’s my degree,” well-selected music and great videography, Daniel’s account is oddly satisfying for viewers of all ages and industries.

He started the account in fall 2020, seeing steady and unexpected growth over the one year he’s operated it.

“I basically just started recording stuff while I was at work, and I would just send Snapchat videos to friends,” he said. “I posted an Instagram story one time, which kind of started it all. I had a lot of people tell me, ‘You should start a TikTok. This is really cool stuff.’”

One video shows him using a TurfTok-branded divot repair tool. The tool was a gift from Amanda when the account first started blowing up.

“I was getting thousands of followers at a time,” he said. “All of my friends were texting me saying, ‘Man, this is crazy.’ She found one of those customizable tools and thought it’d be a great addition to the videos.”

When he started the account, he was one of only a few golf course maintenance accounts on the app.

“Now when I get on there, I see all types of other, similar accounts,” he said. “Golf course superintendents, sports turf managers — it seems like there are a lot more turf accounts out there, which is really cool for me to see.”

He kept up the account when he and Amanda moved to Roswell, Georgia, in the last year.

“It’s been fun,” he said. “It’s turned into a cool little hobby I can do while at work. I don’t want it to ever interfere with my work — I put that first. But if I have a chance to stop and get a video of something cool we’re doing that day, I try to.”

As avid sports fans, the Johnsons’ favorite Auburn memories are “very sports-based,” and they’re proud to share that passion and heritage online.

“Daniel and I both attended the Kick Six and Miracle in Jordan Hare games together,” Amanda said. “We didn’t miss a single home football game any of the four years — five for Daniel — that we were undergrad students.”

“Another great memory for me was being able to work on the baseball grounds crew in the spring of 2016,” Daniel added. “Not only was it helpful for my career, but I also enjoyed every chance I got to be there for the games.”

Amanda is currently a small animal veterinarian. A 2016 graduate with a bachelor’s degree in animal sciences, she also graduated from the College of Veterinary Medicine at Auburn in 2020.

“All of my hands-on classes were extremely beneficial to me,” she said. “I clearly remember a lot of my classmates frantically studying to learn all of the cattle breeds prior to a quiz, while I was able to sit back and relax because I already learned them in undergrad.

“All of my other favorite memories include my classes that took us out to the equine and swine units as well as the meat lab,” she added. “I went from never having touched a farm animal to being really comfortable around them by the time I graduated.”

The classes Daniel took in the agronomy and soils program are what prepared him the most for his current career. He specifically credited Professor Scott McElroy’s weed science course and Professor Beth Guertal’s sports turf management course.

And these established relationships with professors are what helped Daniel get an internship with the Atlanta Braves, where he was able to work on the grounds crew at Turner Field in 2016.

He and Amanda credit their ability to correctly educating the public about agriculture as an important skill that they hope future College of Agriculture graduates retain as well.

“The average person does not realize how much agriculture affects their day-to-day lives,” Daniel said. “Current and future Auburn ag students have the responsibility of promoting factual agricultural information to those who may not be as informed on agricultural topics.”

He said all Auburn students should be proud of Auburn’s agricultural history and influence and eager to share it with the world — not unlike his mission on TurfTok.