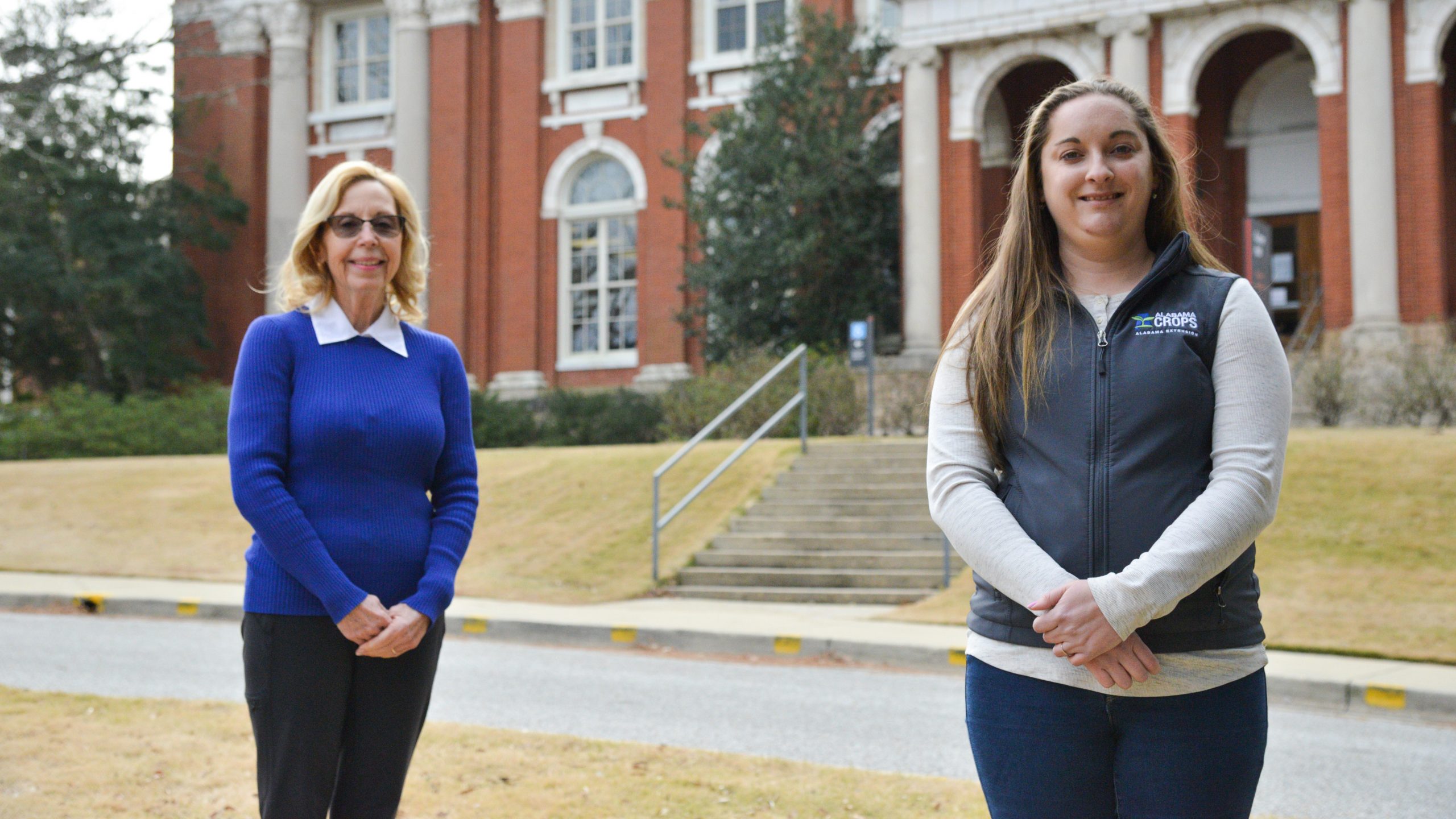 Scientists in Auburn University’s College of Agriculture and Alabama Cooperative Extension System are world renown for their expertise in Southern row crop production, and they continue to share that expertise even during a pandemic.

These researchers and specialists, along with others from throughout the nation, usually present their findings from the most recent production season during the annual Alabama Row Crops Short Course, normally held each December in Auburn. However, facing the risks associated with COVID-19, organizers decided in 2020 to take the short course online for the first time.

“We made the decision back in August to hold the course online, since we usually begin contacting speakers in September,” said Audrey Gamble, assistant professor and extension specialist in the Department of Crop, Soil and Environmental Sciences.

Since the short course became available online on Dec. 14, more than 450 people have viewed the videos, Gamble said.

“As in previous years, we have a top-notch line-up of speakers,” she said. “While COVID kept us from a traditional, in-person short course, we were dedicated to equipping our farmers with cutting-edge information as they make decisions about the upcoming year.”

Each video is 10 to 15 minutes long and covers current research on pressing issues affecting Alabama farmers. The videos will continue be promoted at 2021 winter production meetings.

“We hope to return to the in-person format in 2021, as one-on-one conversations are a valuable part of this meeting,” Gamble said.

Research presented by Auburn scientists was conducted throughout the pandemic, as the College of Agriculture and Alabama Agricultural Experiment Station proceeded with their experimental work in the face of unprecedented challenges. Failing to proceed would have resulted in the loss of one year’s worth of experimental data and a failure to perform on contracted research work.

Among the short course presenters is Amanda Scherer, assistant professor and extension plant pathologist in the Department of Entomology and Plant Pathology, who discusses a new and emerging disease affecting cotton in the Southeastern United States called cotton leaf roll dwarf virus (CLRDV).

“Cotton is a major row crop in the Southeast and in Alabama,” Scherer said. “In 2019, Alabama was ranked fifth in total cotton production with producers harvesting 532,000 acres of cotton valued at $396 million.”

Historically, she said, virus-incited diseases of cotton have not caused significant losses in the Southeastern U.S. cotton production region, especially when compared to other diseases like target spot.

“In late August to October of 2017, cotton plants displaying symptoms of a possible virus were observed in producer fields across Alabama,” Scherer said. “Samples were collected from Barbour County, and the virus was identified as CLRDV by Drew Skirmisher and Kathy Lawrence from Auburn University. The virus also was identified as CLRDV by Judy Brown from the University of Arizona.”

The virus is transmitted by the cotton aphid and has been more of a problem in Brazil, Argentina, India, Thailand and Australia. Yield losses of up to 80% have been reported on susceptible varieties in Brazil.

In the Southeast, Scherer said, yield impact varies by region. “We’ve found it difficult to quantify yield losses based on symptomatic plants alone, except in extreme cases where it has affected late-planted cotton.”

CLRDV causes a wide range of symptoms that can vary by region, cultivar, soil fertility and weather conditions. It’s a challenge to definitively diagnose the pathogen based on symptoms alone without molecular testing.

“There are, however, some common symptoms we see at different times throughout the growing season that are related to CLRDV,” Scherer said. “This can include leaf distortion with a rolling of the leaves. Rough, crinkled leaves are common with this virus. We also observed some late summer leaf bronzing or wilting of the leaves. Other symptoms include node stacking, stunting of plants, red veins and stems, and accentuated verticality.”

A team of Auburn researchers is leading an effort called the Sentinel Plot Working Group that includes several universities in the 10 Southeastern states affected by the virus. The Sentinel plots — located in the various states — will serve as an early warning system for the virus and allow researchers to monitor it throughout the season.

“We’ve learned this year that the incidence of the virus varies greatly throughout the Southeast and even within the states,” she said. “Also, we’ve seen very low aphid pressure this past season, so that helps to keep the virus numbers low.”

Researchers also have seen a large range in how the virus responds to different cultivars. In addition, earlier planted cotton hasn’t been affected as much by the virus as late-planted cotton.

“Unfortunately, the strain we have in the Southeast U.S. is genetically different from the one in South America, so their resistant varieties are not resistant to our strain. Resistant varieties are the best long-term solution for the virus, but we don’t have them yet. Cotton breeders Jenny Koebernick and Peng Chee are working tirelessly towards this effort.”

In terms of managing aphids, researchers are not recommending that farmers attempt to completely control the vector as “One aphid can transmit the virus in 40 seconds,” she said.

Recommendations do include a good winter weed burndown as well as cotton stalk destruction. This reduces vegetation for the aphid and virus to overwinter in from one season to the next.

“We’ve found, based on surveys, that henbit, white clover and primrose are all hosts for CLRDV and also would be good habitats for the aphid,” Scherer said. “Planting early also is good. As later-planted cotton appears to be more at risk for yield impacts caused by CLRDV.”

Also presenting Auburn-based research is Kathy Lawrence, professor in the Department of Entomology and Plant Pathology, who focuses on controlling nematodes in Alabama row crops. Nematodes are microscopic worm-like animals that feed primarily on the roots of plants.

“Reniform nematode symptoms on cotton include reduced yields, which seem to get worse each year,” Lawrence said. “In the second week of June, we can dig up roots, wash them gently, and you’ll see nematodes with all soil particles attached. With the reniform nematode, only the female that enters the root and causes damage.”

The only way you’ll know for sure if you have a nematode problem is to take a sample and send it in for testing, she said.

“The numbers vary dramatically over the season,” Lawrence said. “Once the cotton plant begins to grow, the nematode numbers grow along with it. Once you harvest the cotton, nematodes no longer have a food source, and their numbers drop by 70%. If you take samples in the spring, numbers will be much lower than in the fall.”

Nematode-resistant cotton varieties or cultivars are available to growers, she said, and have increased yield by 619 pounds per acre. Nematicides have been shown to increase yields by 170 pounds.

“We looked at two fields in the Tennessee Valley, one inoculated against reniform nematodes and one that wasn’t,” she said. “We put the same varieties in the fields and looked at the yield difference. Last year, we had 59% less cotton in the reniform field versus the reniform-free field. The average over 10 years is 47%.

“If you have a clean field, plant those first and then plant the infested field and wash the equipment so you don’t put it in the reniform-free field.”