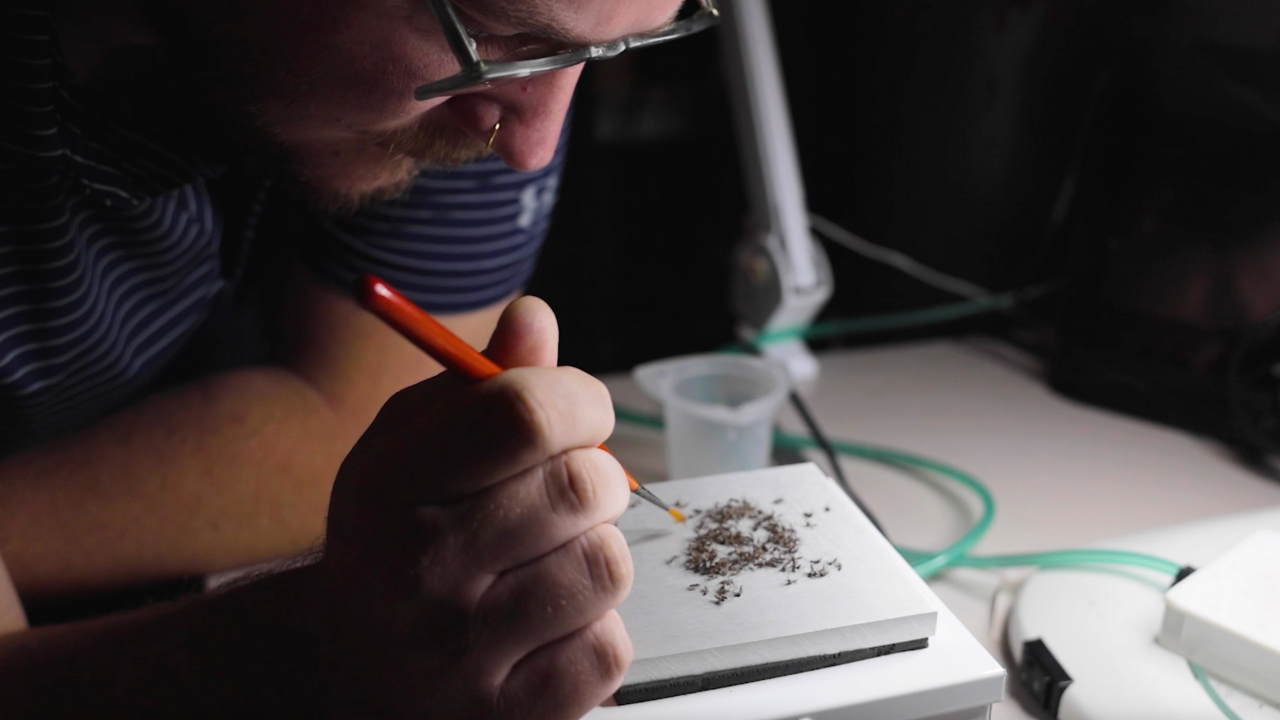 So, imagine you’re a female mosquito.

You’re patiently circling, waiting to pounce, while your unsuspecting victim enjoys a picnic with no idea they have unknowingly been placed on your menu. Your multi-lensed eyes have confirmed what your carbon dioxide-detecting and thermal-imaging sensory organs first alerted you to — a likely meal — and although your intended entree is wearing long sleeves, your proboscis, or mouth parts, include six razor-sharp, needle-like appendages that can easily penetrate the tiny spaces in the shirt’s weave.

A perfectly designed biting machine, you close in and stealthily alight on your target’s shoulder, plunging those blood-sucking daggers downward like you’ve done so many times before. But this time they bounce off the sleeve harmlessly. You try and try again, more frantically each time, but the unique weave of the fabric foils your bite and ruins your evening dinner plans. Frustrated, slightly bewildered, and with a noticeably bent proboscis, you drunkenly take flight to look for an easier meal. This time, man beats mosquito.

That’s the kind of “Bug’s Life” scenario that a team led by John Beckmann, assistant professor of entomology and plant pathology in Auburn University’s College of Agriculture, hopes to make an everyday occurrence through the development of a lightweight fabric that blocks mosquito bites while also being cool enough to wear during hot and humid weather. Beckmann’s team includes students Alexa England, Kyle Oswalt, Natalie Wong, Richard Murphy and Bryan Holt, along with collaborator Jim McCann at Carnegie Mellon University. Their work was recently awarded an $868,145 grant from the Alabama Department of Economic and Community Affairs (ADECA), one of three grants made to Auburn professors totaling $1.31 million overall.

Beckmann first came up with the idea of bite-proof clothing while brainstorming possible research projects in his back yard, although he swears it wasn’t a mosquito bite that inspired him. He did recall, however, an earlier Minnesota camping trip where deer flies bit him repeatedly through a heavyweight, long-sleeved shirt. That convinced him his idea was potentially useful, but the first step for him and his team was making sure that available “mosquito-proof” clothing wasn’t already doing the job.

Most bite resistant clothing currently on the market is either impregnated with pesticide or made with thick, non-breathable fabrics that are both hot to wear, yet still easy for the insects to overcome. Another alternative is to cover oneself from head to toe in regular clothing, but even that gives a false sense of security.

“People say, ‘wear long sleeves’ a lot,” Beckmann explained. “But long sleeves don’t block mosquitos. There are also several companies out there that claim their fabrics resist bites, but we tested them and they really don’t. They’ve never solved the issue of the holes in the makeup of their fabrics, which allow the mosquitos to penetrate them.”

Beckmann says the vulnerability of current textiles lies in the weaving method, which leaves gaps the mosquitos can easily exploit.

“Clothing is constructed by taking a linear fiber and essentially weaving it over another fiber, or by looping loops, as in knitting,” he said. “Both these processes leave microscopic holes. It’s hard to see them with the naked eye, but if you hold your clothes up to the sun, you’ll see how much light shines through. Every one of those holes is far larger than the mosquito’s proboscis. So it’s actually very easy for them to bite through even supposedly mosquito-resistant clothing.”

Since they tested various shirts currently advertised as mosquito-proof by wearing them and sticking their arms into a tank full of the hungry mosquitos, Beckmann and his team know more than they want to about bites. Research can sometimes itch. But while the solution to the problem seems simple — find a way to eliminate the holes, or at least make them smaller than a mosquito’s proboscis — that’s easier said than done. Because not only is the Auburn group trying to design clothing that will resist bites, they are also trying to make that clothing cool and comfortable, which traditionally has meant using a breathable material that will allow air to circulate. And fabric breathability has always required holes.

“That is the precise reason why this project is not as easy as people think,” Beckmann noted. “You obviously need your clothes to be breathable. Paradoxically, that usually comes at the cost of letting mosquitos bite through them. So the basic problem is keeping the holes there while simultaneously sealing them off from microscopic mosquito mouth parts.” 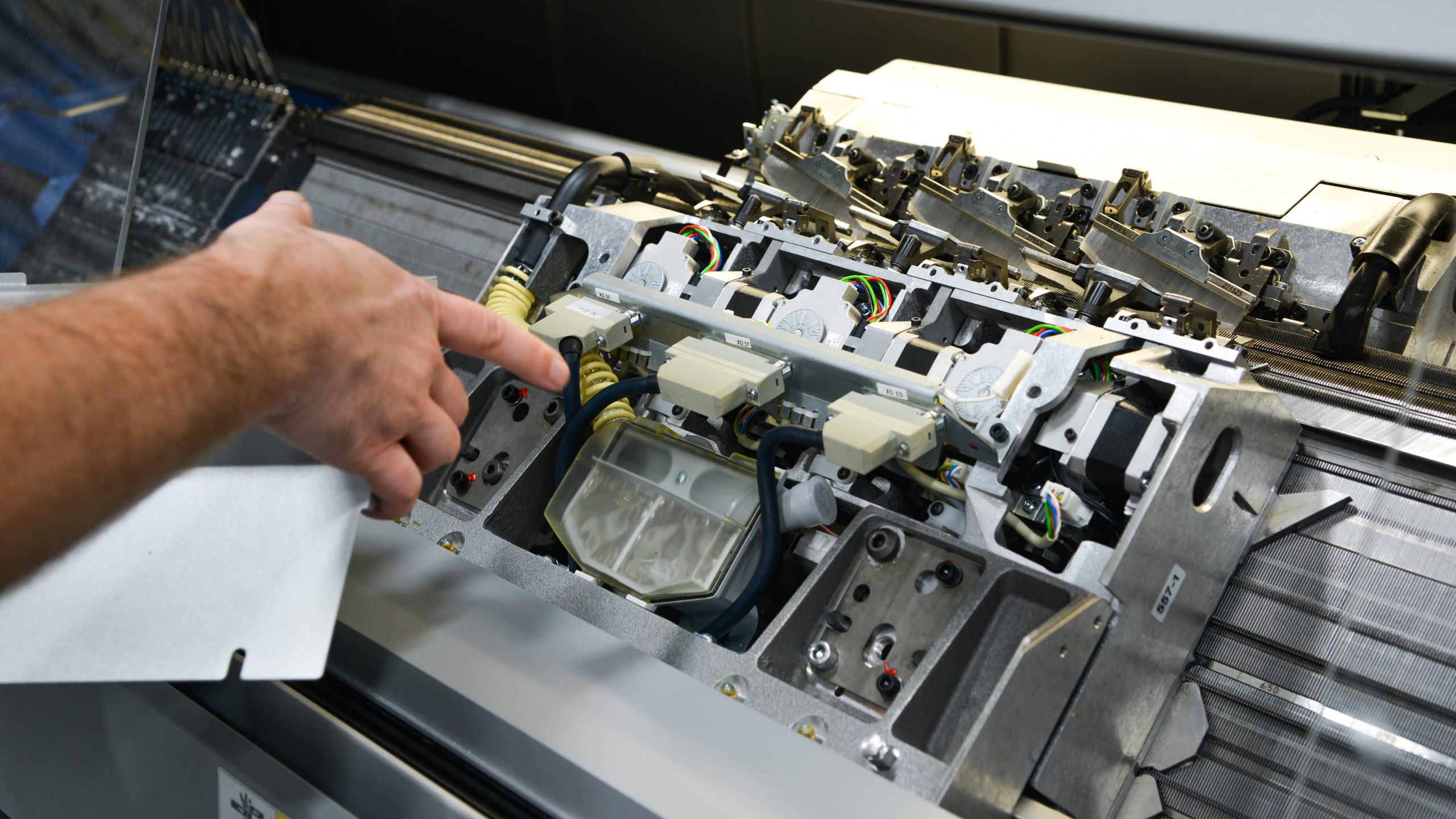 A key to solving this paradox is the team’s acquisition of a CNC knitting machine — thanks in part to the ADECA grant — that provides the ability to produce textiles at a very fine level of resolution. In comparison to traditional weaving, these so-called “weft-knitting” machines build textiles by interconnecting loops of yarn in a horizontal fashion. The result is multiple interconnected layers within a single seamless fabric, and the process is often referred to as “3D knitting.” With the added ability to use multiple types of yarn, CNC machines allow the fabrication of a much greater range of textile types and provide many more options of structural geometry.

“Alabama used to be a big source of textile manufacturing and research and Auburn was a major part of that.” Beckmann said, “But over the last few decades, much of that manufacturing went overseas and Alabama lost its place in the textile industry. The ADECA grant is to some degree attempting to help restore that place by establishing this knitting laboratory in Auburn. We want to do more with what we were given and bring Alabama back as a textile innovator and manufacturer.

“Another important thing to emphasize about the knitting lab,” he added, “is that we are looking for collaborations. There are applications in engineering, aerospace, fashion, art, entomology, agriculture and many other areas. With this CNC machine knitting and the ability to twist our own fibers, we are certainly capable of more than just mosquito-resistant textiles. We can potentially help with any textile research or with trying to make new textiles from novel inputs. So we are open for business, and anyone who wants to collaborate should directly contact me.”

For now, however, the first challenge for the new lab is mosquito-defeating apparel. While other researchers are working on that same problem, Beckmann says there is room for many potential solutions.

“Textiles are very complex and there are many variables that go into constructing them,” he said. “You can generate almost infinite iterations, and in that search space of theoretical textiles, some of those iterations will block mosquito bites and some won’t. And some of those materials will be comfortable and others won’t.

“It’s all about finding the best combinations,” he added. “Obviously, there are different brands of shoes, cars, etc. So there is room for more innovation. We hope to contribute to the field and generate the best product. With a few good minds contributing independently, the problem should get solved one way or another. That’s how science works.”

Beckmann and his team are also testing their results against a variety of mosquito species — hoping for a “one size fits all” approach than can resist multiple types. In the U.S. alone that means 176 different known species, while there are more than 3,000 species worldwide.

“What we hope to do is generate a product that blocks multiple mosquitos, not only the most common Aedes, Culex and Anopheles species,” Beckmann said. “But this has to be tested, and it’s one area that has not been tested enough. It is one definitive reason why what we are doing is different from other researchers. We are trying to explore all the worst mosquitos, and not just the easiest ones to culture.”

After a year of testing and gathering data, Beckmann and his team have developed a fabric that foils mosquitos with help from roboticist McCann at Carnegie Mellon, a researcher who programs knitting robots. But it is not yet as comfortable as they would like. The next step is to make it more breathable and cooler to wear.

“Think of it as athletic apparel that blocks mosquito bites,” Beckmann said. “The knitting machine lab is what allows us to try different methods of manufacturing. In the end, clothes have to be mass-manufactured. So you have to find a solution to the problem that is scalable. And that is what the knitting machines allow us to explore.”

Eventually, Beckmann hopes to repay ADECA’s investment in the idea many times over by developing a product that can be made in Alabama, bringing new industry and jobs to the state. “We hope to manufacture our product in state,” he said, “and we are already talking to business collaborators within Alabama to begin setting up that process. But we have a long road still ahead.”

But if Beckmann and his Auburn team succeed, it will be a sweet — and notably bloodless — victory in the long, ongoing war between man and the mosquito. Enjoying the outdoors without fighting off hordes of the hungry, biting insects will be as easy as slipping on the right clothing, and that clothing will hopefully be made in Alabama.

The only real losers will be the mosquitos. For once, being a mosquito will bite in a whole new way.