For the love of mud: as Nat Geo Explorer, Auburn’s Waters probes polluted lake’s past through sediment 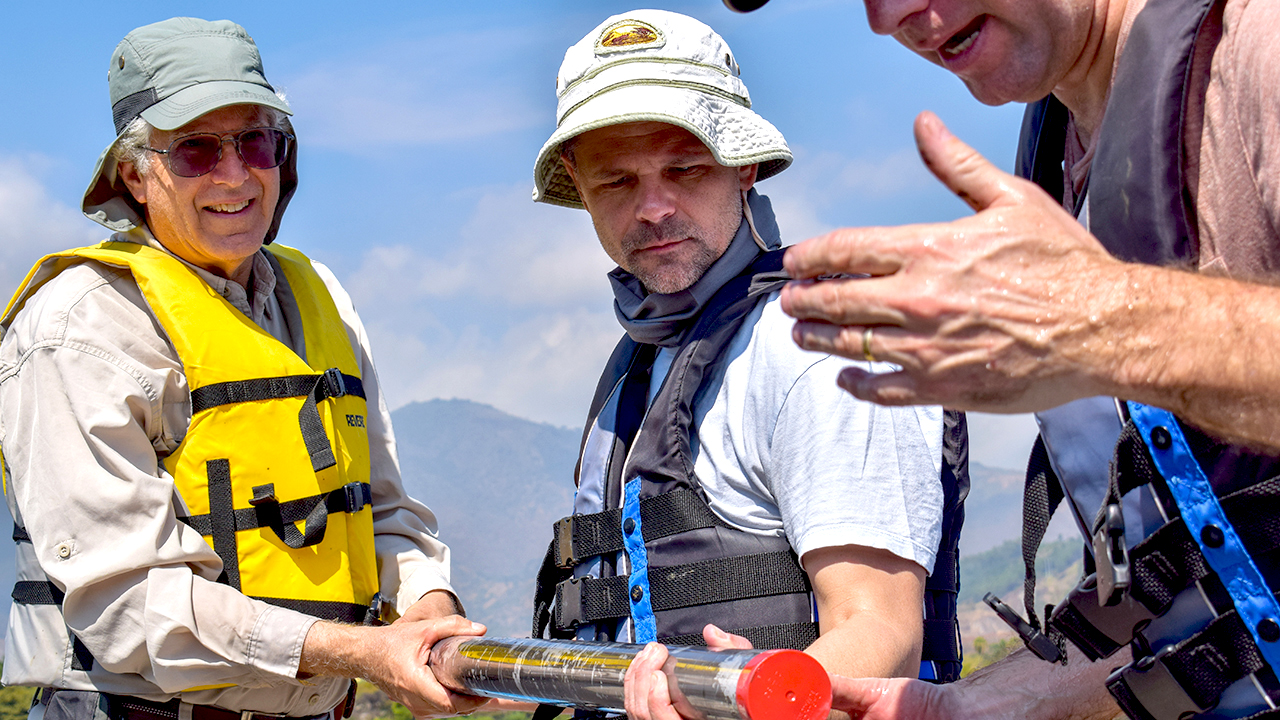 “Greeting Explorers!” reads the salutation as Matt Waters, Auburn environmental science assistant professor, opens his email from the National Geographic Society. Getting these emails, Waters said, is one of the fun perks of being one — a National Geographic Explorer, that is. It’s a title Waters has worn since the premier national scientific and educational organization agreed to fund the paleolimnologist’s research in Guatemala, and he’s as happy about the relationship as a kid playing in mud. After all, vintage mud is his subject matter.

Waters’ study of preserved lake and reservoir sediment is serious business that yields important information about the quality of our waters and their ecosystems in response to the environment, climate and the activity on the land around them. What Waters has learned from that mud, and what he wants everyone else to know, is that what happens on the land does not stay on the land. It all eventually ends up in the water.

Specifically, as a paleolimnologist, Waters’ research focuses on how and why there have been significant changes to a body of water. His research has taken him to various healthy and not-so-healthy waterbodies throughout the Southeast and, now, in Central America.

He is particularly interested in knowing if there have been large-scale changes in the ecosystem that may have included an abundance of aquatic plants, algae and cyanobacteria. It’s a phenomenon called eutrophication, and you know it’s occurring because the water is green, and not in a good way.

Eutrophication of a lake occurs from excessive nutrient levels that cause dense growth of plant life and algae production, which, in turn, contribute to low oxygen levels in the water that can kill the animal life. Often, nutrient overload is caused by runoff resulting from human activities on the land.

“Humans can affect lake ecosystems through watershed land use and changing local hydrology,” Waters said. “Fertilizers, fuel, trash — these things can all eventually make their way into our waters and produce rapid cultural eutrophication. Eutrophication of a lake can then result in fish kills and mess with the lake’s ecosystem, affecting the native fish and wildlife in the area.”

In order to find out what’s happening in the water and why, Waters has to get all the way to the bottom of it, literally. That’s where the long-preserved lake sediment comes into the research. The mud tells the story of what has been happening to the lake over the years.

His research tool is a simple one: a core sampler, a long, hand-powered tube that extracts cores of sediment from lake bottoms. These extracted cores basically provide a timeline of lake activity and health. Cores can be as long as 5 meters, or 16-plus feet, and every meter contains hundreds to thousands of years’ data. The longer the core, the older the data.

Waters then takes the sediment cores back to the lab, where they are sliced into 2-inch sections that go through a range of biological, geological and chemical analyses. Though these samples often yield some interesting fossils, Waters is actually interested in other data present in the sediment: the photosynthetic pigments and organic matter.

“I analyze the pigments in the sediment, and we’re one of only a few labs in the world to focus on pigments in sediments,” he said, explaining that each color present in the sediment reveals unique matter, such as cyanobacteria, minerals, metals and pollen. “All these markers have their own unique signals, like fingerprints. So the pigments provide a story of what’s been making its way into the waters over the years and settling to the bottom.”

From this information, Waters can then create a history of the lake — what entered it, and how it responded. He can also determine whether the lake has recovered from a stressor once before. That knowledge is key to Waters, because the ultimate goal of his research is to glean information about the lake’s past to aid in healthy management practices for the future. Knowing if eutrophication has occurred in a lake’s past may be critical to recovery and prevention.

“Cultural eutrophication is generally assumed to be a very recent phenomenon,” Waters said. “But little research has been done to determine if ancient civilizations caused similar changes in aquatic ecosystems.”

This question is what has twice led Waters, backed by National Geographic, to the mountains of Guatemala and to Lake Amatitlán, an exotic waterbody with a long past.

Located close to Guatemala City, the area around Lake Amatitlán is home to lots of agriculture, and it supplies the name-brand coffee beans that fuel many Americans’ mornings. It is also the main water source for the surrounding villages, where Maya culture is still prevalent, and for the nearby growing city of Amititlán.

The lake offers Waters a special model to test his query about eutrophication, because it currently is characterized by extremely high nutrient and chlorophyll concentrations and suffers from persistent cyanobacteria blooms. In other words, it’s green as the Hulk. But the lake’s unwelcoming appearance hasn’t stopped the locals from using it as their main water source.

“It’s amazing to see,” Waters said. “The people still wash in the lake, fish in it. Over near the hot volcanic springs in the water, you’ll see women washing their clothes. And this lake is green. I mean green. Yet they use it for everything.”

Lake Amatitlán’s highly eutrophic state seems to be a relatively recent 21st century occurrence, due, in theory, to the growth of Amatitlán.

“There’s a large movement of people from the rural areas to the urban areas, much like what is happening here in America,” he said. “But this is a developing country, so you see these shantytowns, one after another, cropping up all around Amatitlán. This expanding production of waste and pollution all flows into the lake via the river.”

But is the lake’s current state a recent phenomenon?

“Our project at Amititlán is to see how far eutrophication extends into history,” Waters said. That comparison of ancient and modern impacts on the lake could reveal that cultural eutrophication was a consequence of human settlement throughout prehistory.

“Not only do we want to find out if recent human-induced landscape changes, water use and waste discharge have caused the current conditions in the lake, but we want to find out if it occurred during the period of ancient Maya occupation as well,” he said. “If it has, the important question we are asking is, can it be cleared?”

Comparing two populations separated by centuries may seem a stretch in the truest sense of the word, but Waters said it makes sense. The ancient Maya civilization that once inhabited the lands around the lake was densely populated and agriculturally advanced, with sophisticated methods of food production at the height of its existence. Waters speculates that this ancient human activity would have certainly resulted in runoff to the lake.

Additionally, there is the tragic yet advantageous anomaly that Maya civilization seemingly collapsed during the ninth century with no explanation, though scholars have theorized several scenarios, including a severe drought. Remnants of the civilization remained in Central America until the 16th century but were eventually vanquished by Spanish conquerors.

Waters believes lengthy sediment cores extracted from different areas of the lake will tell the story — that there will be a clear delineation between the two societies’ existences and that he will be able to compare and contrast the data from the past and present civilizations, drawing a conclusion about the interactions between the ancient Maya and their highland environment.

“We’re hoping that the data from the cores will reveal answers to several important questions,” he said. “Did ancient Maya human activity affect the lake thousands of years ago? Did the lake experience eutrophication then? If so, was water quality a stressor that caused the demise of that civilization? And if there was ancient eutrophication, did the lake rebound, and how long did it take?”

Those questions also intrigue the National Geographic Society, and its backing for Waters’ research has lent some weight to the activities occurring there, particularly for the local citizens wanting to clean up their lake.

“The Guatemalan government has been very concerned about the state of Lake Amititlán, but proposed remedies have been varied,” Waters said. “The local governmental agency that oversees the lake, called the Authority for Sustainable Management of Lake Amititlán, has been petitioning for help from their government to do something about the lake’s condition. Our partnership with them will provide new information about the lake, and hopefully, that will lead to an increase in governmental support.”

So as research often goes, Waters has turned his attention to an unexpected tangent of his research, one that has become a labor of love.

It turns out that, despite the difficulties and inconveniences often posed by a politically shaky, developing nation, Waters has come to love the region and its people and is profoundly moved by the region’s beauty yet unimaginable poverty.

“The other story to this now is that we want to help these people with their lake,” Waters said. “This is a very beloved lake to the people. They depend on it. So in addition to our research on the history of the lake, now we want to help the locals fix the problem.”

To that end, Waters and fellow University of Florida researchers are on a fact-finding mission working with the lake management authority.

“They have pretty much been on their own in trying to combat the eutrophication of this lake,” Waters said. “Right now, we’re just trying to gather data for them so they can make an informed plan for clearing it out.

“Mainly, we’re just trying to determine where the pollution is depositing in the lake, what elements of concern are entering the lake and how is the hydrology of the lake changing its properties.”

Waters’ and his colleagues’ interest in Lake Amititlán has finally attracted the Guatemalan national government’s attention as well as its pleas for help with yet another regional lake in peril, Lake Atitlán.

“This lake is the more important lake in Guatemala,” Waters said. “It’s a bigger lake, surrounded by volcanoes, and is a popular tourist destination with lots of fishing. It’s turning green with eutrophication, too, and the government is worried. So, they’re seeing what we’re doing at Lake Amititlán and have asked for our help. We’ll see where this goes.”

For now, National Geographic Explorer Waters is back home, eagerly awaiting the results of the data analyses of his core samples. Meanwhile, he’s intent on spreading a cautionary tale to those who may think a lake connected to an ancient society and a present-day undeveloped nation is irrelevant.

“Lake Amititlán is an important lake to the people living around it, just as our lakes are important to us,” he said. “Our aquatic ecosystems are a limited and invaluable resource that can be altered. There’s an important need to understand that what happens on the land happens to the water. When we understand this, we can more effectively manage for the future.”