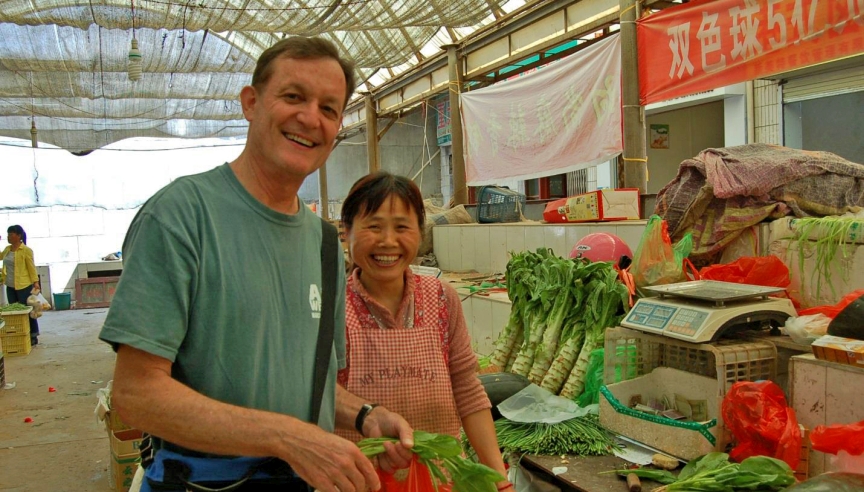 Maymester Abroad a peak of excellence in veteran professor’s career

On all six of the five-week Maymester Abroad study tours to China that College of Agriculture professor David Weaver has led since 2009, he’s s purchased all his fresh fruits and vegetables from the same vendor. Every year when he returns, she greets him with a hug.

In the pre-dawn hours of May 10, 2016, David Weaver and nine Auburn agriculture students flew out of Atlanta’s Hartsfield-Jackson International Airport for a trip halfway around the world. Forty days later, he and those same students landed back in Atlanta.

Only, they weren’t the same students. Not really, because spending close to six weeks of their lives immersed in the culture and living among the people of another country—in this case, China—is transformational.

“It” is Maymester Abroad, a study tour that the College of Agriculture initiated in 2009 and that Weaver, veteran plant breeder and professor in the Department of Crop, Soil and Environmental Sciences, developed and has led six times over the past eight years.

In Maymester, Weaver teaches his normally semester-long Plant Genetics and Crop Improvement course—his favorite course, by the way—to no more than 10 Auburn undergraduate and graduate students, for Auburn credit, but he does so in five intensive weeks and, most significantly, in a classroom at Northwest Agriculture and Forestry University in the Yangling District of Xían, China.

To cover all the course material, Weaver lectures two hours a day, five days a week—and not just to Auburn students. Most days, Chinese students far outnumber the Maymester bunch, and Weaver’s never quite figured that out.

“They don’t get any college credit for the class; they just show up,” Weaver says. “Some are probably there because they’re genuinely interested in crop genetics, and some come because they want to improve their English. Whatever their reasons, they are welcome.”

The biggest differences between the accelerated course he teaches in China and the course at Auburn are that Maymester students don’t have labs and aren’t assigned a writing project that’s required of on-campus students.

“But they’re learning the material and, at the same time, they’re doing that in China,” Weaver says. “That is huge.”

“Huge,” because, after class on weekdays and every weekend, the Auburn gang goes full throttle, seeing the sights together, exploring Xían and other cities on their own, trying all manner of Chinese foods, figuring out how to communicate and making more than a few new friends among the Chinese.

Weaver, too, has made new friends on every Maymester tour and keeps up with those individuals from year to year.

“There’s one market where I’ve always bought all my fruits and vegetables and eggs, and from one particular lady,” he says. “She always remembers me and is glad to see me. That’s always great.”

On the inaugural Maymester, in May 2009, Weaver no idea what the next five weeks held when he and six College of Agriculture graduate students arrived in Xían. Neither he nor any of his students had ever been to China. He had only a general sense of the country’s geography, knew little about the culture or customs there and for sure and certain didn’t know the language. At all.

Nevertheless, the trip was a big-time success, as have been the five subsequent Maymester tours he has led. And each has been unique and memorable.

“No one trip is the same as another,” Weaver says. “I always make sure to do at least one thing different on every trip. And you have totally different personalities every year. It’s always interesting, and it’s always great.”

Though the experiences differ greatly, there’s one thing that Weaver can count on with every single group.

“It never fails, in every group, somebody’s going to ask me, ‘Is this the best time you’ve ever had over here?’” he says. “That’s like asking a parent which child is their favorite. I just always tell them that every trip is different, and I leave it at that.”

Weaver joined the faculty in Auburn’s College of Agriculture in 1981, shortly after completing his Ph.D. in agronomy from Purdue University, and at Auburn he has remained. He has a strong research program focused on cotton and soybean breeding and genetics, but teaching has always been his first love, and he excels at it. In his 35 years at Auburn, he has received at least a dozen teaching and advising awards and just completed a three-year appointment as the Ralph “Shug” Jordan Endowed Professor of Writing, a university-wide position.

Of all his crowning achievements, though, Weaver calls Maymester “one of the best thing I’ve ever done.”

“This trip takes students out of their comfort zones and opens their eyes to so much,” he says. “The most valuable aspect of this trip to me personally is the students—watching their faces when they see the Terra Cotta Museum for the first time, or their reactions when they see the Great Wall.

“To me, college is all about taking smart students and giving them the experiences they’ll need to negotiate their lives. Knowing the impact that you can have on a student, that’s what means the most to me.”

But what of the future, especially given that Weaver plans to retire from Auburn at the end of August? At any point during the 2016 tour, did he think about how it could be the last Maymester he’ll lead?

“Honestly, I’ve looked at every one of these tours like it’s the last one I’ll lead,” he says. “Making the trip happen always depends on so much, on getting grants and rounding up enough funding to make it happen, and every year, the cost of everything goes up. I never know.”

So, what if, a few months from now, he were offered the opportunity to return for Maymester Abroad 2017?

“I certainly wouldn’t object to it,” he says. “If the money’s right.”