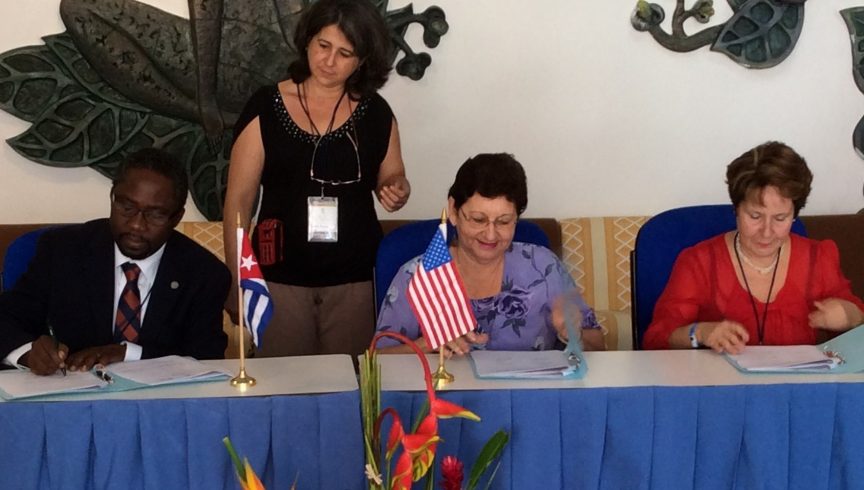 AUBURN, Ala.—Less than six months after the U.S. announced plans to restore diplomatic and economic ties with Cuba, the Auburn University College of Agriculture has entered a historic partnership with the Agrarian University of Havana and the Cuban National Center for Animal and Plant Health that paves the way for faculty and student exchange programs and collaborative research efforts between Auburn agriculture and the Cuban institutions.

The five-year international academic interchange agreement that administrators from the three entities formally signed May 21 in Varadero, Cuba, was the culmination of a process that got underway more than five years ago, when faculty and administrators in the College of Agriculture began working to establish academic relationships in the communist island. Henry Fadamiro, College of Agriculture assistant dean and Office of Global Programs director, signed the treaty on behalf of the college and Auburn.

The treaty is one of the first such agreements between Cuba and an American university since the U.S. imposed the Cuban trade embargo in 1962.

“For the Cubans, and for the College of Agriculture and Auburn University, this is monumental,” Fadamiro said. “This means that now we are in a position to take advantage of the opportunities to work with Cuba as equal partners.”

“With this treaty and the recent removal of Cuba from the U.S. terror list, we can take our students there, we can work with their faculty in research and, for the first time, we can bring their students and faculty here,” Fadamiro said. “They have much to learn from us, and we have much we can learn from them.”

The agreement also provides the legal framework for expansion of the academic collaboration with Cuba to other colleges and programs at Auburn, Fadamiro said.

“Not only that, but it sets the stage for the State of Alabama and the nation of Cuba to begin a relationship that can be huge economically, here and in Cuba,” he said.

Other Auburn faculty attending the signing ceremony with Fadamiro were associate professor Brenda Ortiz in the Department of Crop, Soil and Environmental Sciences and Cuba native Rodrigo Rodriguez-Kabana, distinguished university professor emeritus of plant pathology, who was in Varadero, too, for the 47th annual meeting of the Organization of Nematologists of Tropical America.

Fadamiro said that, over the past five years, several College of Agriculture faculty played crucial roles in laying the groundwork for and eventually securing the academic agreement. In addition to Rodriguez-Kabana and Ortiz, professor Beth Guertal and department head and professor emeritus Joe Touchton, both in crop, soil and environmental sciences, and agricultural economics professor Joe Molnar all were highly instrumental in the effort. Bill Batchelor, former College of Agriculture dean, also was extremely supportive of the effort, Fadamiro said.

Key to the success, however, was Rodriguez-Kabana and the level of trust he has attained among Cubans, Fadamiro said. Rodriguez-Kabana was the invited speaker in the scientific meeting’s closing session, and following his remarks, the Cuban Nematological Society presented the 75-year-old Auburn nematologist a special award for his ongoing efforts over the past 30 years to foster relations between the U.S. and Cuba.