New peanut variety is first of its kind for Auburn 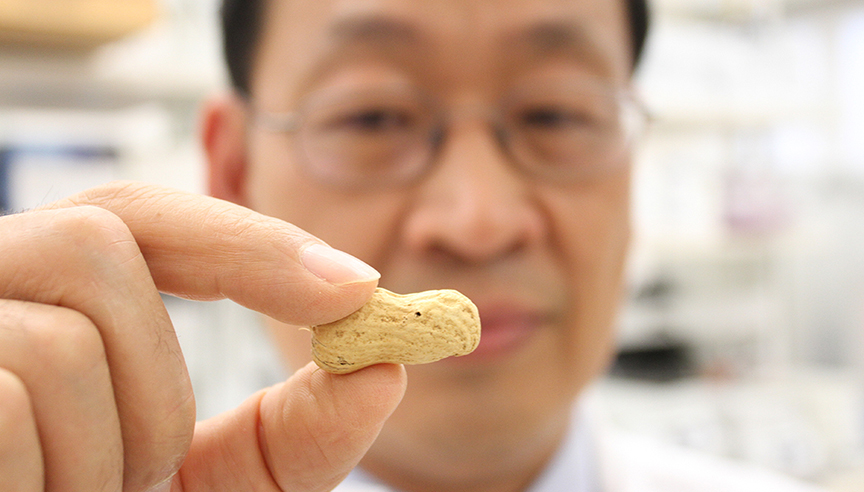 Auburn University might be relatively new to the peanut breeding business, but its just-released runner peanut variety is already winning accolades for its high yields, resistance to disease and healthy traits.

The new release—AU-NPL 17—is the product of a peanut breeding program operated jointly by the College of Agriculture’s Department of Crop, Soil and Environmental Sciences and USDA’s National Peanut Research Lab in Dawson, Georgia. It’s the first runner-type cultivar released by the program and is well-adapted for growing conditions throughout the Southeast.

Runner peanuts are most commonly used for making peanut butter and are typically grown in Alabama, Georgia, Texas, Florida, South Carolina, Mississippi and Arkansas. They account for 80 percent of the estimated 1.5 million acres of peanuts grown in the United States, with Alabama growers planting approximately 175,000 acres this past year.

While the Auburn peanut breeding program is the youngest of its kind in the Southeast, it is rapidly making a name for itself, says Charles Chen, a former USDA Agricultural Research Service research geneticist who joined the College of Agriculture in 2012 and is a professor of peanut breeding and genetics.

“With the release of this first runner-type variety, we’re establishing a research pipeline,” Chen says. “Now we’ll be able to make new crosses or selections and other varieties can be released through the program. There’s always something to improve upon; you never reach perfection. That is why we are here.”

Future releases will build on AU-NPL 17’s high yield, disease resistance and other factors, he says.

“You can never totally suppress pests if you continue to grow a cultivar in the field,” Chen says. “By nature, pests will mutate and fight resistance and tolerance, so resistance eventually will be conquered by pest mutations.”

AU-NPL 17 has been tested throughout Alabama, Georgia, Mississippi and North Carolina, where runner-type peanuts of a medium maturity group are adapted.

“It has shown good adaptability, with its primary advantage being high yields and good adaptation from irrigated fields to nonirrigated, from single to twin-row patterns, and when grown with or without fungicide treatments,” Chen says.

In terms of yield per acre, AU-NPL 17 compares favorably with Georgia-06G, the University of Georgia release that has been the gold standard of Southeastern growers for several years now. In yield tests conducted in 2014 and 2015 in Headland, Fairhope, Dawson and Hattiesburg, Mississippi. AU-NPL 17 averaged 6,499 pounds per acre in eight tests as compared to Georgia-06G’s average of 6,175 pounds per acre.

In USDA Uniform Peanut Performance Tests 2016, AU-NPL 17 yielded higher than Georgia-06G in Alabama and North Carolina. In terms of ranking, the Auburn variety was ranked No. 1 in Alabama tests and No. 2 in North Carolina tests, with GA-06G ranking No. 5 in both tests.

AU-NPL 17 also is resistant to tomato spotted wilt virus and tolerant to leaf spot disease, both primary pest concerns for Southeastern growers. In addition, it has some resistance to white mold.

“In tests without fungicide treatments, AU-NPL 17 is generally more resistant or tolerant to tomato spotted wilt virus, early and late leaf spot and white mold than other cultivars in the test,” Chen says.

Auburn’s new peanut release also contains a higher amount of oleic acid compared to standard peanuts. Oleic acid is a monounsaturated fatty acid, also known as a “good fat,” that reduces the amount of LDL, known as “bad” cholesterol, while boosting the levels of “good” HDL. Monounsaturated fats are commonly found in foods such as nuts, seeds, olive oil, canola oil and avocados. This trait also substantially improves the shelf life of peanuts and peanut products.

“The industry is demanding a high-oleic peanut,” says Chen. In fact, Mars Chocolate, one of the top five peanut buyers globally, has committed to using 100 percent high-oleic peanuts in their products by the end of this year.

“We don’t produce as many high-oleic peanuts in the U.S. as countries such as Argentina and Australia, and that hurts our competitiveness internationally,” Chen says. “I believe high oleic will become the standard for U.S. peanut production.”

Yet another value of high-oleic peanuts is that peanut buyers normally pay farmers a premium for growing them.

Six-thousand pounds of breeder seeds of AU-NPL 17 will be planted this year by the Alabama Crop Improvement Association, Chen says.

“Hopefully, next year, we will have 120 tons of foundation seed,” he says. “We should have a few farmers growing the cultivar on a test basis in the spring of 2018, and most farmers will have the seed available to them in 2019.”

While the peanut cultivar breeding process typically takes about 10 years to complete, Chen was able to shorten it by a couple of years by growing peanuts in Puerto Rico during the winter months.

“Peanut breeders can send seed to Puerto Rico in November and then get increased seed back at the end of March to speed up the process,” he says. “We did that for two seasons, so it gave us a shorter interval with this cultivar.”

The first of many

John Beasley, professor and head of Auburn’s Department of Crop, Soil and Environmental Sciences, says AU-NPL 17 should prove to be of tremendous benefit to growers in Alabama and throughout the Southeast. Beasley should know; he was a peanut agronomist at the University of Georgia for 30 years before coming to Auburn.

“We’re very excited for Dr. Chen and his program,” Beasley says. “In addition to outstanding yields, this new cultivar also has resistance to some of the more common peanut diseases and, even more important, it has high oleic acid, which is now being required by the industry and demanded by consumers. AU-NPL 17 should be an especially good fit for Alabama producers, since it was developed and tested in the state, and it should help growers lower their seed and overall production costs.”

Beasley says AU-NPL 17 is the first of what will be many runner-type releases from the program at Auburn.

“We’re looking at sources from other programs, and our program will help to expand the genetic resources available in the Southeast,” he says. “This release certainly puts us on the map as far as breeding programs go, and we’re expecting many new releases in the coming years with different genetic traits.”

One area the breeding program will focus on in the future will be traits that enable more efficient plant water use, Beasley says. This would prove beneficial for producers in Alabama, where a majority of the cropland is not irrigated.

On the Horizon: What’s Next for New Alumni 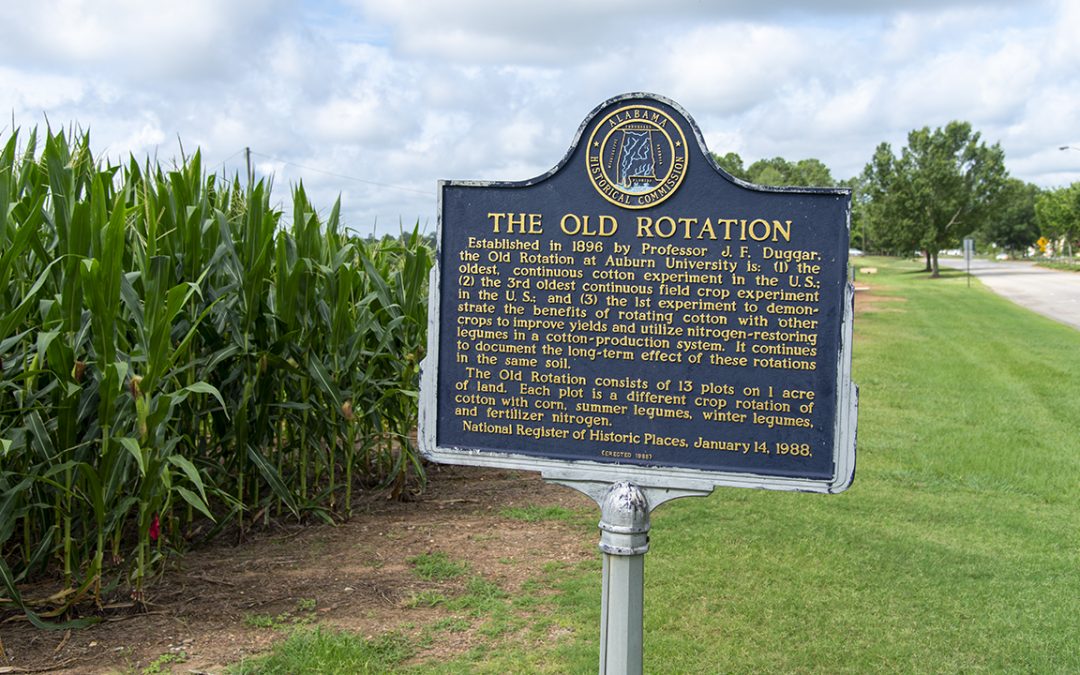 Department Head’s Reportby John P. Beasley, Jr., Ph.D.(B.S., Agronomy & Soils, 1979) Welcome to the inaugural issue of The Rotation, the newsletter of the Department of Crop, Soil and Environmental Sciences at Auburn University! It is my honor and privilege to...

An Auburn University professor and researcher is one of the founding members of an international group of scientists and industry professionals that has launched an ambitious new project aimed at improved understanding of the most intractable species of weeds in the... 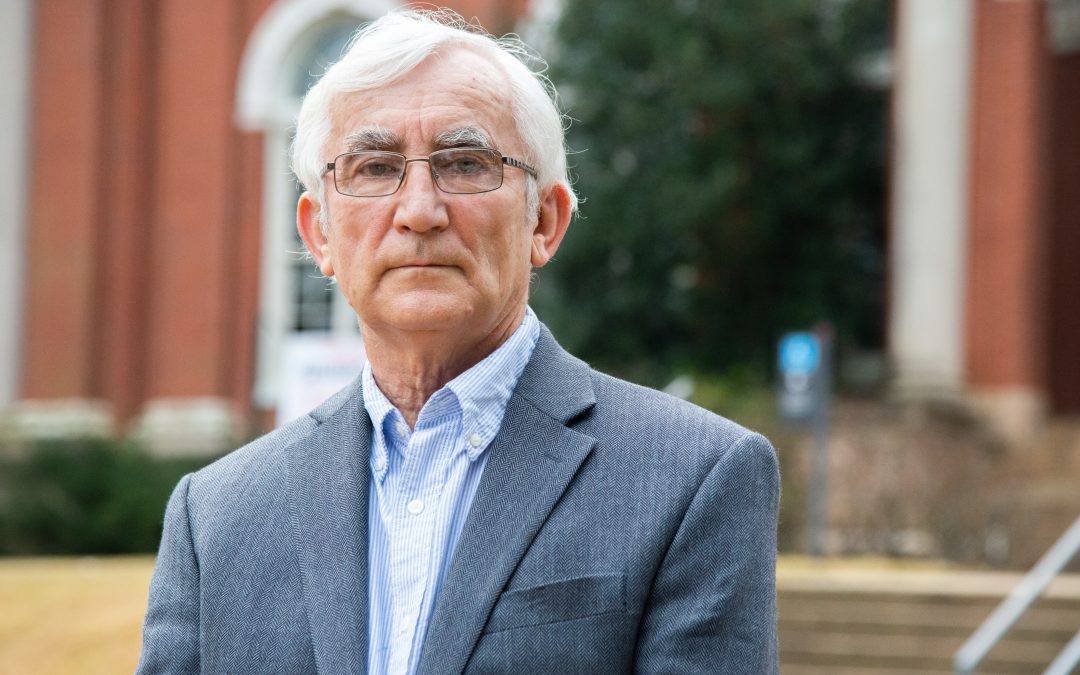