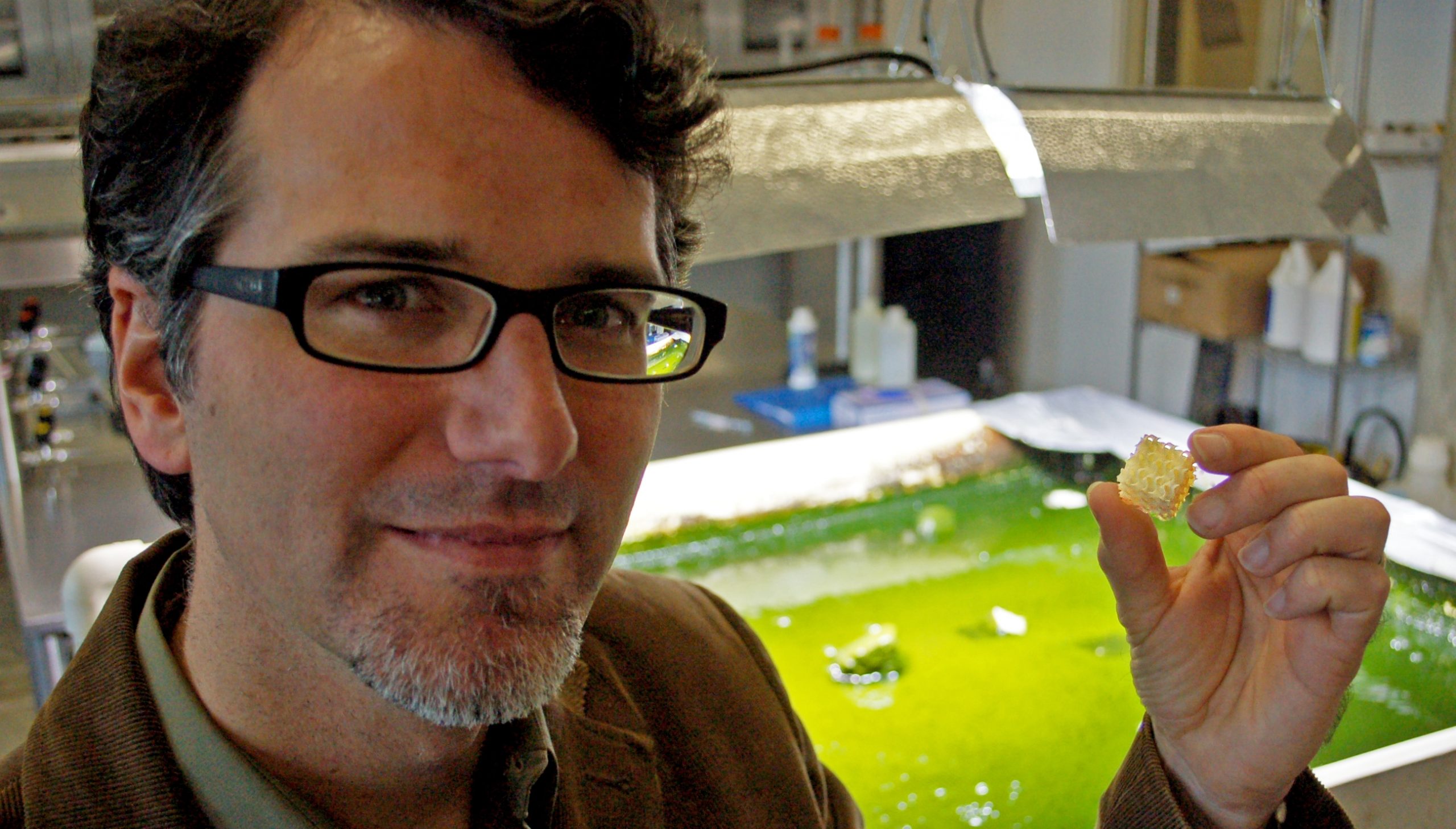 What do the U.S. Department of Defense, arts and crafts tycoon Martha Stewart and College of Agriculture researcher David Blersch have in common? All three are embracing a new technology known as 3D printing to advance their respective fields. For Blersch, an ecological engineer and assistant professor in the Department of Biosystems Engineering, that means using the cutting-edge process to determine the optimal conditions for growing one of the planet’s most basic life forms, algae.

You might wonder why anyone would want to grow algae. The slimy stuff can be the bane of pond and pool owners’ existence and can wreak havoc on farm and municipal water supplies. However, like many other unsung organismal heroes, algae play a vital role in the planet’s ecosystem—like producing half of all oxygen and forming the foundation of the aquatic food chain—and can be quite useful under the right circumstances.

Though out-of-control algal blooms can shut down entire water systems, as was the case this summer in Toledo, Ohio, scientists have long known that their potential uses far outweigh the tiny organisms’ less becoming behaviors. For instance, algae can be used to make fertilizer, fuel, animal feed and human food and, as voracious consumers of CO2 and nutrients, can be efficient water purifiers. This last use is the one Blersch and team are studying in his lab in the Center for Advanced Science, Innovation and Commerce, or CASIC, in the Auburn Research Park.

How does all of this relate to 3D printing? Scientists and entrepreneurs alike are looking for ways to harness the potential of algae for pollution control and to produce profitable products. Multiple efforts are underway to farm algae, and in those cases, it is important to understand what characteristics influence growth of the cash crop. Just as soil plays a significant role in the success or failure of a traditional crop like cotton or corn, the surfaces to which algal communities attach can contribute to their growth rates.

That’s where Blersch’s 3D printing comes in. He and his team, including Andres Carrano, associate professor in Auburn’s Department of Industrial and Systems Engineering, are printing tiles—similar to the ones on your bathroom floor, but plastic—with various surface textures and degrees of roughness. They then cultivate algae on those tiles and check back to see which textures support greater growth.

A better understanding of how surface texture affects algae growth will be helpful to companies like Algae Systems that are developing new ways to farm algae. Based in Nevada, Algae Systems is currently cultivating native algae species in Mobile Bay with a goal of producing diesel fuel. In the meantime, their crop is also helping clean the bay and generating valuable carbon offset credits that can be purchased by fossil fuel companies. In fact, Auburn biosystems engineering researchers are working with Algae Systems to perfect the process of converting one of the farm’s byproducts—a thick, dark, crude oil-like liquid—into diesel fuel.

Asked how his research could impact the average Alabamian, Blersch points to the state’s abundant water resources and mild climate as ideal for algal growth and emphasizes that there are possibilities in both the public and private sectors.

“There is the potential for Alabama to reap benefits from algae cultivation, both in pollution recovery, but even more so in developing products from algae,” says Blersch, mentioning biofuels and nutraceuticals—nutritional products that are derived from food sources— as two of the specialty products that could be made right here at home. “There is the potential for Alabama to be a leader in algae cultivation, at least in the United States.”

VIDEO: Learn more about what algae is, the good it does in the environment and how Alabamians stand to gain from Blersch’s current research in this video.