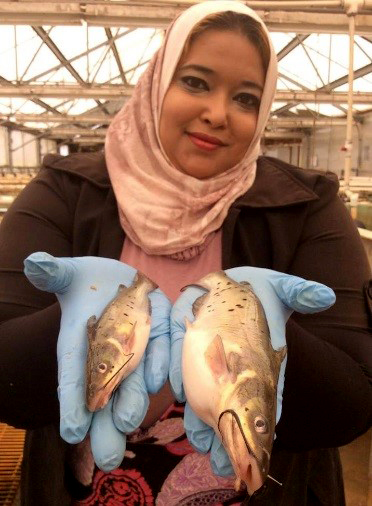 Nermeen Youssef displays an example of the results of her research on growth performance of channel catfish siblings in earthen ponds.

Youssef, who originally arrived at Auburn University four years ago as a visiting scholar from Alexandria University in Egypt, transitioned to become an Auburn student and will complete her Ph.D. in May.

“Her work was so interesting and of such high quality that we mutually agreed to change the plan,” making Youssef an Auburn student, Dunham says.

Dunham explains that, if applied in the catfish industry, the results of Youssef’s research could increase catfish production and profitability. Because catfish production generates more than $100 million annually in Alabama—the nation’s No. 2 catfish-producing state—the increase stands to significantly impact the state’s economy.

For more information on the research and award, contact Youssef at nyy0001@auburn.edu or Dunham at dunhara@auburn.edu.