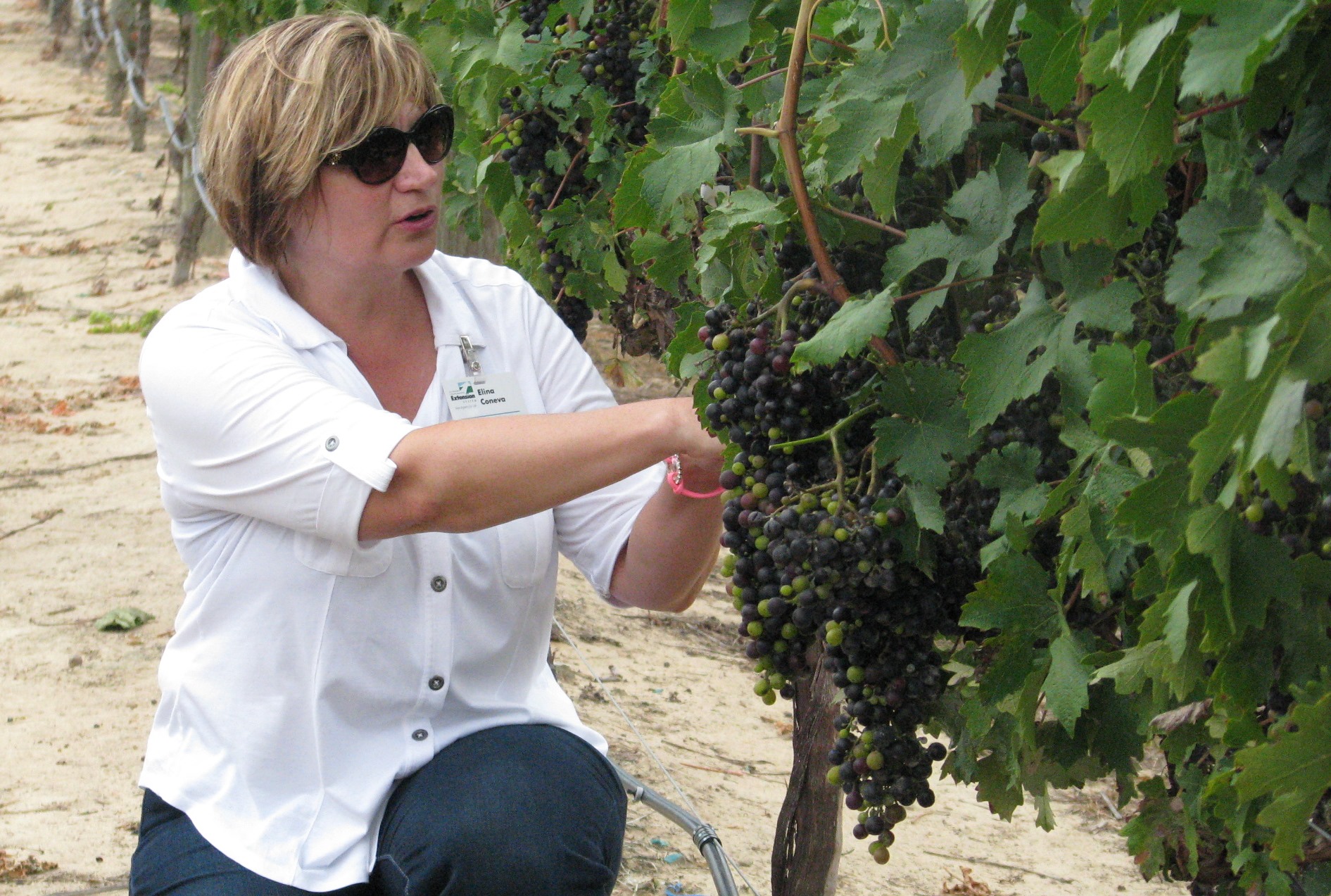 A 100-vine research vineyard that Elina Coneva established at the Alabama Agricultural Experiment Station’s Chilton Research and Extension Center four years ago has the Auburn University horticulture associate professor feeling good about the future of wine grapes in Alabama.

“The knowledge we’re gaining through this project is helping us develop best management practices and production system recommendations for growers,” Coneva says. “All of that is vital for establishing a sustainable grape industry and enhancing the competitiveness of Alabama-grown specialty crops.”

The vines Coneva and Jim Pitts, superintendent of the Chilton County research unit, planted in 2010—funded by the Alabama Wineries and Grape Growers Association and the AAES—are hybrids of European wine grapes, or Vitis vinifera. That’s the species used to produce popular table wines such as chardonnay and pinot noir.

Though muscadines and scuppernongs flourish in the South, successful production of V. vinifera in the region’s humid, subtropical climate has been stymied by the strong threat of Pierce’s disease.

Pierce’s disease is caused by insect-vectored bacteria that form a gel in and clog the water-transporting tissues of infected vines. There is no prevention or control method for the vine-killing disease, but in recent years, a California plant breeder has developed Pierce’s disease–resistant grapevine selections that are 87.5 percent V. vinifera. The experimental vineyard in Clanton contains three of these advanced selections, including early-, mid- and late-season grapes.

The vines at Clanton grew well in 2010, and the following year, Coneva and Pitts removed fruit clusters from the vines to provide optimal conditions for the growth and root system development. Coneva says maintaining a good balance between vegetative growth and yield is essential in grape production.

“If the vine overcrops, vegetative growth weakens and vine vigor and longevity are reduced, and that is not a sustainable production system for a perennial crop,” she says. “The best way to control overcropping is to reduce the number of fruiting clusters per vine by thinning out some of the clusters early in the season, which helps optimize the balance between vegetative growth and crop load.”

Thus far in the ongoing study, the vines have remained free of Pierce’s disease, and since 2012, all three selections have produced impressive crops.

The late-maturing vines had the highest yields and the highest number of fruit clusters per vine in both 2012 and 2013, but the early- and mid-season selections also yielded crops within the optimal range for V. vinifera, Coneva says. In terms of cluster size, the mid-season selection had the largest in 2012, while the early-ripening selection took that honor in 2013. In both years, the late-maturing grapes were the sweetest.

The scientists are in the process of gathering and analyzing data from the 2014 crop.

Currently, Alabama has more than 500 acres of vineyards and 15 wineries, which is a good start. But members of the winery and growers’ association believe Coneva’s research will fuel strong growth in the state’s wine-grape industry.

“I grow Norton red wine grapes and have been fortunate to receive help from Elina on a number of issues,” says Burt Patrick, owner of Ozan Vineyard and Cellars in Shelby County. “Her research and availability to Alabama’s vineyards is critical in creating jobs, economic opportunity and expanding this value-added business in Alabama.”

Wheeler Foshee, associate professor in the Department of Horticulture at Auburn University, was recently recognized by the North American Colleges and Teachers of Agriculture (NACTA) with the annual Educator Award. This national award recognizes those individuals...