Seun Oladipupo is the pinnacle of graduate excellence at Auburn 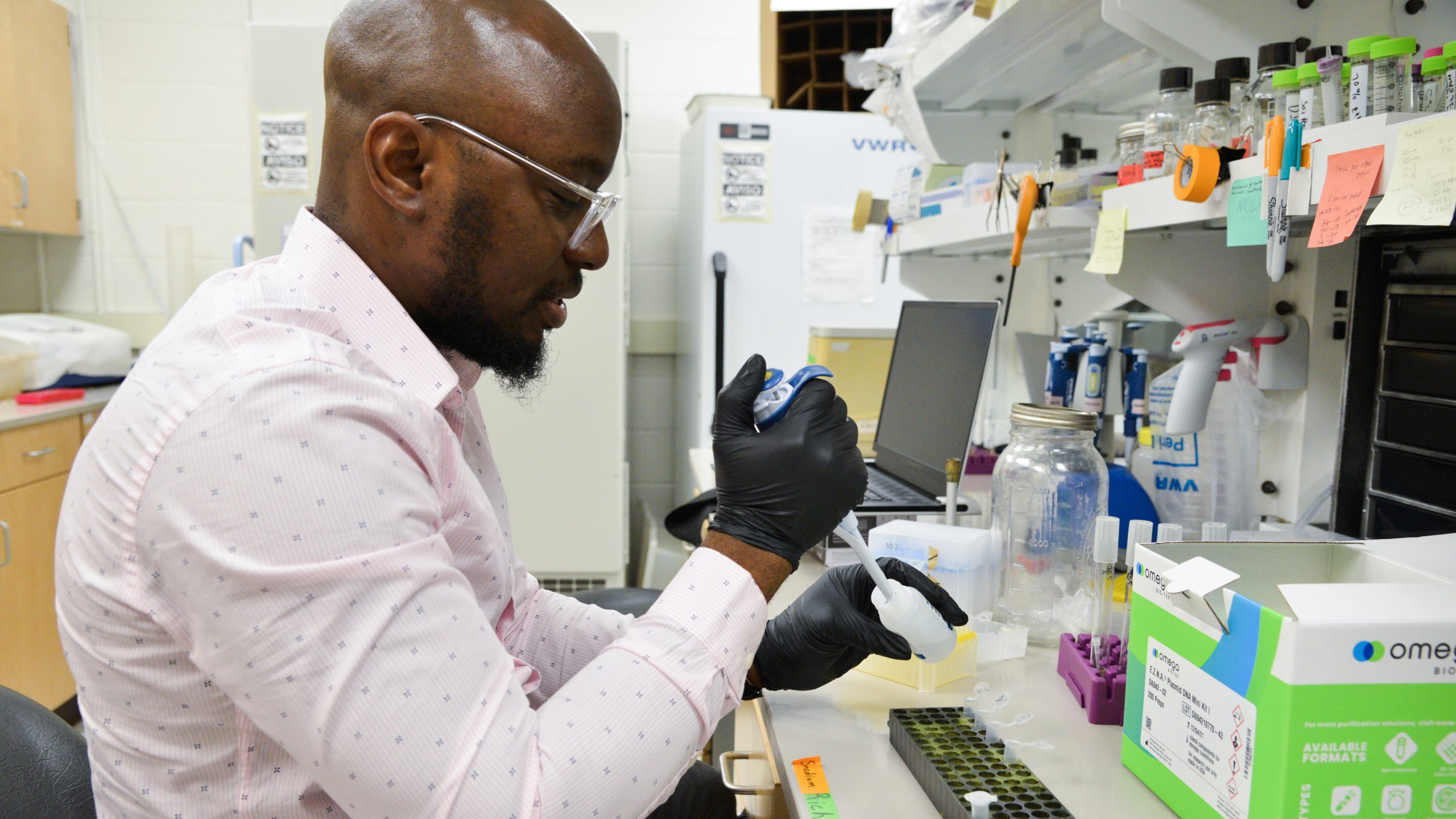 He captained the national winning Entomology Games team; he was president of the F.S. Arant Entomology Club, vice president of the African Students’ Association and treasurer of the Graduate Student Council. And on every team, committee or association he joined, Oladipupo made a difference.

“I joined Auburn in 2018 with the hope that I would be able to answer some questions about pest management,” Oladipupo said.

Specifically, he was researching safer, ecofriendly alternatives to synthetic pesticides. He began his work looking at essential oils — oils extracted from plants.

Additionally, Oladipupo has worked in the lab of Assistant Professor John Beckmann with bacteria found in insects that compromise their reproductive health.

“It is like a sickness that they have,” he explained. “Once they have that sickness that is the bacteria in them, they cannot make babies as much as they want. So, you have something that can suppress insect reproductive capabilities.”

The next step, he said, is continued research into the bacterium in a bid to identify new vulnerabilities that could be used as a weapon against pests, bringing their populations down.

Beckmann said Oladipupo’s work in his lab has been extraordinary.

“Some students are so good they attain legendary demigod status — I feel sorry for everyone else who must be compared to them hereafter,” Beckmann said. “Seun was born of the blood of the gods. Seun is the guy I want in my foxhole. You only have to explain something to him once; then he independently learns and executes; then he teaches others how to succeed. He is an amplifier of success. Anyone who associates with him sees success.”

A native of Efon Alaaye, Nigeria, Oladipupo completed his undergraduate degree in biology at Federal University of Technology in Akure, Nigeria.
It was a happy accident that he studied biology. He applied for biochemistry but didn’t make the cut. But he was too good a student to be turned away, so they gave him biology.

While earning his degree, he often paid a visit to his aunt and uncle’s farm, helping his uncle spray pesticides using a knapsack sprayer.

“One day I did that, I went about my business spraying the crops,” he said. “I saw that the knapsack sprayer was leaking, but I didn’t pay much attention to it. I got home, and I had irritation all over my body. And I just thought, ‘These are the things that farmers on the regular get exposed to.’

“But maybe there are safer options for them to manage pests,” he continued. “That’s how my interests in ecofriendly and safer alternatives to manage insect pests actually started.”

By the time he returned to his alma mater to begin his master’s degree, he had a solid direction of study.

“I was asking myself the question, ‘What can you really use as an alternative to manage insect pests?” he said. “I was in Nigeria at the time, so I had to turn to plant materials. Everywhere you go there, you find a plant growing.”

He turned to existing literature regarding plant material that works against pests and took a public health approach to the subject — choosing to study management of mosquitos, which are the single most hazardous creature to human life on the planet, killing more than one million people annually.

“It’s interesting the way you collect mosquitos,” he said. “You have to do it at stagnant water bodies. You dip your dipper into the water body to collect the larvae. If people see you doing it, they think you’re crazy. Like, ‘What are you looking for in such water?’”

But his efforts paid off. He specifically wanted to see the effect of geographical location on insect response to botanicals. He collected great data that was published in the peer-reviewed journal PLOS One. The study was so good, the journal waived the publication fee for Oladipupo.

After he completes his studies at Auburn this spring, Oladipupo plans to pursue postdoctoral research and, eventually, a professorship.

Professor and Extension Specialist Xing Ping Hu said she has no doubt Oladipupo will succeed in his postdoctoral studies, calling his work thus far “a resilient career with a success-driven mentality and unlimited desire to advance knowledge.”

Oladipupo said he is most grateful for the supportive environment he’s encountered here at Auburn from faculty like Hu, Beckmann, and Faculty Endowed Professor of Entomology Art Appel.

“He has been a truly outstanding and productive student at Auburn University,” Appel said. “He has already made significant contributions to urban entomology and insect physiology, and I have no doubt that he will continue to make a difference throughout his career.”

In his time at Auburn, Oladipupo’s been nominated for and won a competitive internship with the National Pest Management Association along with nearly 15 awards, including Outstanding Ph.D. Student and the International Student Award from Auburn University.

“If I say I want to work with someone, the professors are nice and eager to collaborate, to teach me the things I want to learn,” he said. “The support is really what I like best. Everyone wants to give you what you need to succeed, and they want to celebrate you when you do.”