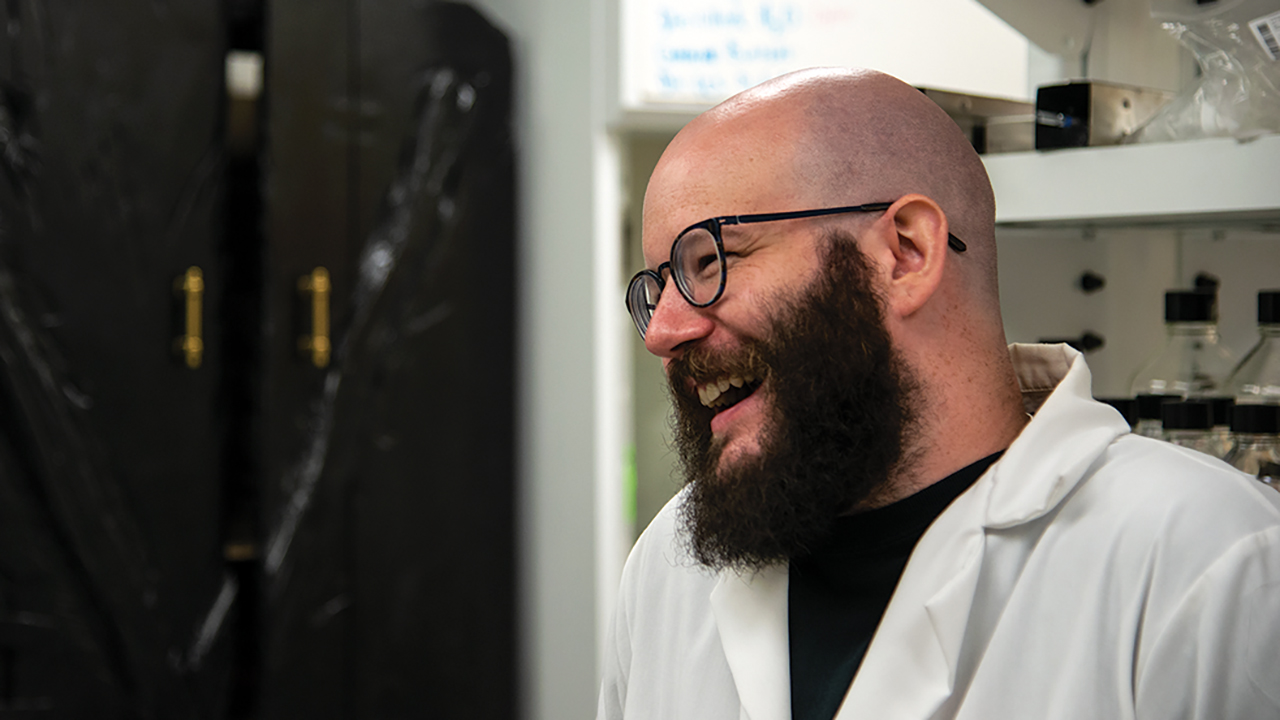 “The many speak highly of you, but have you really any grounds for satisfaction with yourself if you are the kind of person the many understand?”—Seneca, first-century Roman Stoic philosopher

“In order to do anything great, you have to go against what people consider ‘normal.’”— Seneca, as translated by John Beckmann, 21st-century Auburn University assistant professor

How, you may very well wonder, can Auburn University assistant professor John Beckmann pass himself off as someone with expertise in birth control when he has five kids at home, 8 and under?

Because he’s an entomologist, a medical entomologist and biotechnologist whose genetic research over the past decade on disease-transmitting insects has yielded two pioneering discoveries in the last five years that could help save millions of lives worldwide by rendering the sperm of mosquitos and other insect vectors sterile.

“My area of emphasis is sterile insect technology,” Beckmann said. “In other words, birth control in bugs.”

His primary research focus is on Wolbachia, intracellular parasites that infect 65 percent of all insect species, including several mosquitos, and that can result in a selective-sterility phenomenon known as cytoplasmic incompatibility, or CI.

On his way to the doctorate in entomology he completed at his home state’s University of Minnesota, Twin Cities, in 2014, Beckman made a major splash in the ocean of science when he identified the genes that control insect reproduction. Three years later, as a postdoctoral researcher at Yale University, he was the first to pinpoint define the enzymatic mechanisms that allow bacterial Wolbachia genes to induce CI in their insect hosts.

Already in his young career, his Wolbachia and CI research articles have appeared in high-impact peer-reviewed journals the likes of Nature, Nature Microbiology, Trends in Genetics and and Insect Biochemistry and Molecular Biology. And in every article Beckmann submits, as well as each grant he applies for, each presentation he makes and each entomology and biotechnology class he teaches at Auburn, art—original digital illustrations he creates on his 65-inch monitor using the magic of Adobe’s Photoshop and Illustrator applications—is always part of the package.

It’s what he calls “visual persuasion.”

“I tell my students all the time, you can do all kind of research and produce tons of data, but if you want your work to have an impact, you can’t solely rely on statistics and words,” he said. “You have to help other people visualize it. You have to make your research beautiful.”

The “beautiful” part is not surprising, if you know that Beckmann, the scientist, is also Beckmann, the artist. Yes, he’s a bona fide artist, classically trained and degreed as such.

“I was a physiology major on a pre-med track (at the University of Minnesota) and had some extra time on my hands, so I decided I might as well go ahead and get a second degree while I was there,” he said. “I looked through all the different academic majors UM offered and, honestly, art seemed like it wouldn’t be too difficult.

“I took an art course as an elective, just to check it out, and I wound up loving it,” he said. “I also found out I was actually pretty good.”

His digital designs range from intricately detailed insect body parts to creative graphics illustrating, for instance, what happens when the sperm of Wolbachia-infected male mosquitos encounter the eggs of infected and uninfected females. So advanced are his Photoshop and Illustrator skills that he’s making a name for himself without even trying.

Back in February, Adobe, the global leaders in creative software, invited him to a conference in Miami to share with faculty, students and staff from 45 colleges and universities around the country the many ways he incorporates art and Adobe tools into his teaching and research. He titled his presentation “Visual Creative Power in Science at Auburn University.”

He’s also been sought out by other Auburn researchers interested in spicing up their grant applications with illustrations by Beckmann. And effective fall semester 2019, he’ll be teaching students from across the Auburn campus in a new applied biotechnology course — APBT 5660 Figure Fundamentals: Scientific Illustration — that he was instrumental in establishing.

Meanwhile, he’s working toward a third bachelor’s degree, this one in computer science at Auburn.

“I have a lot of creative energy,” he said. “I always have to be doing something.”

While digital artwork using the latest software tools is at one end of Beckmann’s expertise, a centuries-old relief printing technique called woodcut is at the other.

As for Beckmann’s woodcut prints, they may take some getting used to.

“My artwork is influenced by some of the great 15th- and 16th-century printmakers, and so it focuses on fantastical monsters, swords, sorcery and faith-fueled zealotry,” he said. “It also follows the theme memento mori—‘remember that you will die’—so there are skulls, skeletons, Four Horsemen of the Apocalypse, that kind of thing.

“I get in trouble sometimes when people misinterpret my art,” he said. “But I was born for the Middle Ages, and my imagery reflects that. I like fantasy.”

The framed 37-by-48-inch woodcut print hanging outside the third-floor Funchess Hall office he has occupied since arriving at Auburn in 2017 is a case in point. Titled “Escherichia coli codon torture table,” the monochrome print features cryptic letter combinations in oppressive Gothic script and borders of barbed wire, spikes, shackles and chains.

To some, it may come across as downright bizarre, but Beckmann isn’t much bothered by what others may think.

In his eyes, the torture table is a magnificent work of art.

“I consider it one of my best pieces,” he said. “It’s my favorite. A real synthesis of my style in science and in art.”

The idea for the design in question came to him during his pre-Auburn stint as a postdoctoral researcher in Yale’s molecular biophysics and biochemistry department, where he continued his Wolbachia genetics studies.

“When I was a postdoc at Yale, I had to consult the E. coli codon table so often that I finally printed one out and taped it on my wall,” he said. “It was essentially an Excel spreadsheet, and it was ugly, so I decided that once I became a faculty member, I would make a beautiful codon table that I loved to look at. Mine is far better and cooler than the computer kind.”

Beckmann creates his woodcuts in his garage, mainly because personal space is hard to come by when you have a houseful of kids. He sketches each design on a large block of 3/4-inch birch plywood and then uses Japanese carving knives and chisels to gouge away the negative, or nonprinting, space, so that the image stands out in relief.

Once he’s satisfied with the carved block, he applies ink with a rubber roller and then carefully presses the design onto thin sheets of mulberry paper to produce numbered, handmade prints.

He does sell his prints and occasionally works on commission, “but I do these more for myself than anything else,” he said.

Several of his favorites, including a couple he’s created as labels for his dad’s homebrews, grace the walls of his office in Funchess.

“Funchess Hall is so ugly, it needs all the help it can get.”

Beckmann and his four sisters grew up in Faribault, Minnesota, 50 miles south of St. Paul. Both parents are physicians, and he said their influence pushed him toward medical fields. That was his plan when he enrolled in the physiology degree program at UM in 2005 and even after he added the art major, and had it not been for mosquitos, he might well have ended up as a medical doctor.

“My senior year, I started working in a mosquito lab on campus, and that’s when I discovered research,” he said. “I’m a creative person, and it didn’t take me long to realize that research allows a lot of room for creativity and innovation.

“Growing up, I always wanted to do human health stuff, and medical school was the obvious way to go, but the fact is, mosquitos kill over 725,000 people ever year around the world, more than any other animal, including other humans,” he said. “When you think about it, medical doctors help only one person at a time, but if my research can contribute in any way to the fight against mosquitos, I’ll be helping save millions of lives.”