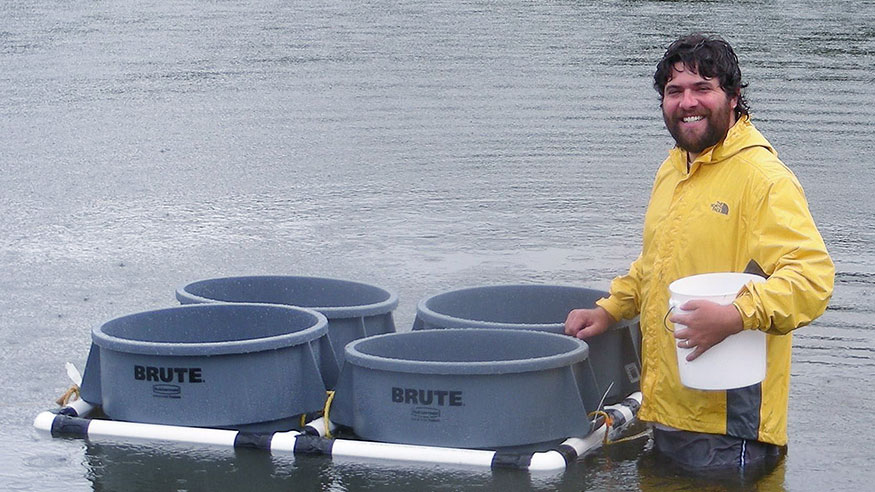 AUBURN, Ala. —In the seven years he has been on the faculty in Auburn University’s School of Fisheries, Aquaculture and Aquatic Sciences, associate professor Alan Wilson has introduced more than 70 undergraduate students from Auburn and beyond to the fascinating world of scientific research.

These students have been more than passive observers in Wilson’s warm-water aquatic ecology laboratory; they have been actively involved in the research process, as is evidenced by their scholarly output, which includes co-authoring with Wilson 10 journal publications and 36 conference presentations.

“I am passionate about creating meaningful research opportunities for undergrads,” said Wilson, who began mentoring undergraduates in research as a graduate student at Michigan State University in 1998. “I’m always thrilled to share my love of science with students and engage them in the scientific method.”

For his outstanding record as a mentor, Wilson has been named winner of the 2014-15 Provost’s Award for Excellence in Fostering Undergraduate Research and Creative Scholarship at Auburn and will be recognized formally during the university’s faculty awards ceremony this fall.

“This award is in recognition of your sustained efforts to promote excellence in undergraduate scholarship through research,” Auburn Provost Timothy Boosinger said in a letter notifying Wilson of his selection.

In addition to Auburn students from across the campus, Wilson’s young scientists have included 34 undergraduates from other universities across the state and region who, from 2011 through 2013, spent summers in Auburn working with Wilson through his National Science Foundation–funded Research Experiences for Undergraduates program in aquatic ecology.

“These students were here strictly for the opportunity to do research, because that isn’t an option for them at their home universities,” Wilson said. “I trained them in a variety of skills, such as experimental design, scientific ethics and the how-tos of developing presentations.”

Wilson said training the undergraduate researchers “to do good science” is his primary goal.

“But after that, I want to get them interested in and excited about science,” he said. “I want them to see that science is fun.”

The provost’s mentoring award was established in 2010 to highlight a faculty member’s significant commitment to undergraduate scholarship and creative work outside the classroom.