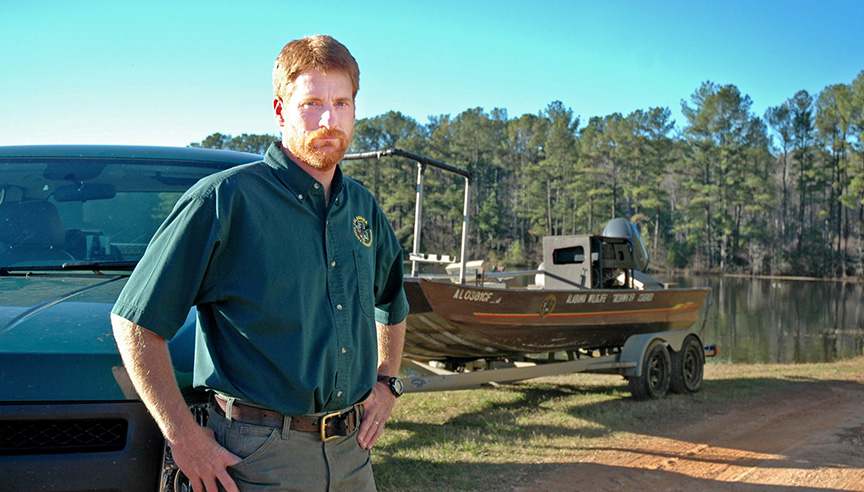 Graves Lovell earned a master’s in fisheries management in 2000 and is a district fisheries biologist with the Alabama Department of Conservation and Natural Resources’ Wildlife and Freshwater Fisheries Division.

His dad helped revolutionize the way we farm fish. Now this fisheries grad spends his days ensuring folks can catch them.

If you’ve ever crossed paths with Graves Lovell, chances are you remember him. It’s fairly likely he’s the only 6-foot-2-inch redhead you’ve ever met, and if not, his trademark mustache—think Magnum, P.I., Auburn edition—renders him quite unforgettable.

Of course, there are other reasons you might recall interacting with this College of Ag alum—his encyclopedic knowledge of the state’s aquatic species, his dry wit or his laid-back, don’t-I-know-you-from-somewhere demeanor, to name a few. Or it could be that you remember the excitement in his tone when conversation turned to his work as a district fisheries biologist with the Alabama Department of Conservation and Natural Resources’ Division of Wildlife and Freshwater Fisheries.

When asked to describe this role, Graves boils it down to sound-bite size with the skill of a seasoned politician—“managing, enhancing and protecting the fisheries resources for the people of Alabama”—but ask him to dip into the details, and be prepared for the flood gates to open. It’s obvious he not only takes seriously what he does every day, he also believes in it…and loves it.

One would have to love this work to remain enthusiastic about it as long as Graves has. The son of long-time Auburn fisheries professor and world-renowned fish nutritionist Tom Lovell, Graves’ “career” began as a bottle washer in the Swingle Hall lab of professor emeritus David Bayne. Graves was 14.

He spent the next few summers weed-eating around the research ponds at what is now the E.W. Shell Fisheries Research Center north of Auburn.

“They don’t even weed-eat around those ponds anymore. Makes me sick,” he jokes.

Growing up among the researchers who literally wrote the books on warm-water fisheries did not mean he would spend his undergraduate years in their classrooms. But while completing his bachelor’s degree in wildlife sciences, he did the grunt work for grad students studying under fisheries professor emeritus Mike Maceina. It was enough to inspire him to pursue a master’s degree, and this time, it would be in fisheries management.

In all, Graves worked seven and a half years for Maceina while completing his undergraduate and graduate work. In 2000, with a master’s under his belt, Graves went to work for a private pond management company. Six years later, he transitioned to the public sector and his current position with ADCNR.

Since then, he’s spent thousands of hours in Alabama’s ponds, lakes, reservoirs and streams. While most of his work involves—you guessed it—fish, his responsibilities as a fisheries biologist are far from monotonous. On any given day, his to-do list might include leading a workshop for children, certifying an Alabama record catch, identifying an exotic fish snagged somewhere in the state, photographing and cataloguing an aquatic plant species, investigating a fish kill, or electrofishing reservoirs and state lakes.

Every once in a while, a project comes along that creates a bigger ripple. While helping private pond owners implement management plans has long been part of the agency’s work, with budget cuts becoming routine in state government, a few years back, Wildlife and Freshwater Fisheries chief Stan Cook foresaw a time when the agency may no longer be able provide this service. And though a handbook, Sportfish Management in Alabama Ponds, was developed by the agency decades ago, Graves and others had noticed that it wasn’t quite as effective as in-person consultations.

“There has always seemed to be a big disconnect between pond owners reading the literature and actually implementing correctly,” he says.

So, in 2008, Graves and fellow fisheries biologist Jay Haffner began the task of turning the handbook into a video series. What they expected to take a couple of years took almost six. But the result is the most comprehensive pond management resource that exists.

You might wonder why a state agency is so concerned with the management of private fisheries. First, these small impoundments make up almost a third of the state’s total surface area of water. And they’re not just where most folks catch their first fish—they’re also where fishing first catches most folks.

“We feel that well-managed private ponds, at least in Alabama, are instrumental in the recruitment of new anglers and even an appreciation of the outdoors,” Graves says. “This has become even more important now that there are so many activities competing for a family’s time.”

Anglers who have a memorable experience on a private pond typically go on to purchase licenses to fish public waters. And those fishing adventures are major business in Alabama, adding an estimated $1 billion to the state’s economy each year and making recreational fishing one of the state’s most lucrative pastimes.

With this in mind, an enormous amount of effort went into the making of the video series, which is available free online or can be requested on DVD from ADCNR. The series is organized into seven “chapters” containing a total of 59 segments, most of which are around two minutes long. Covering every single step of pond management from site selection to crisis control, the series boasts more than 27,000 views so far and is the next best thing to on-site consulting, especially for visual learners.

“The biological principles behind nearly all of the management inputs we cover in the videos were developed at Auburn University—many of them in the ’50s by Dr. Homer Swingle,” he says. “The biology hasn’t changed, just the expectations of the pond owner.”

And thanks to the work of Swingle and others—Graves’ own dad included—recreational fishing continues to grow in popularity and profitability, improving lives and communities in ways you probably never imagined.

VIDEO:
Learn from Graves and the ADCNR team just about anything you might need to know about pond management in the Sportfish Management in Alabama Ponds video series.