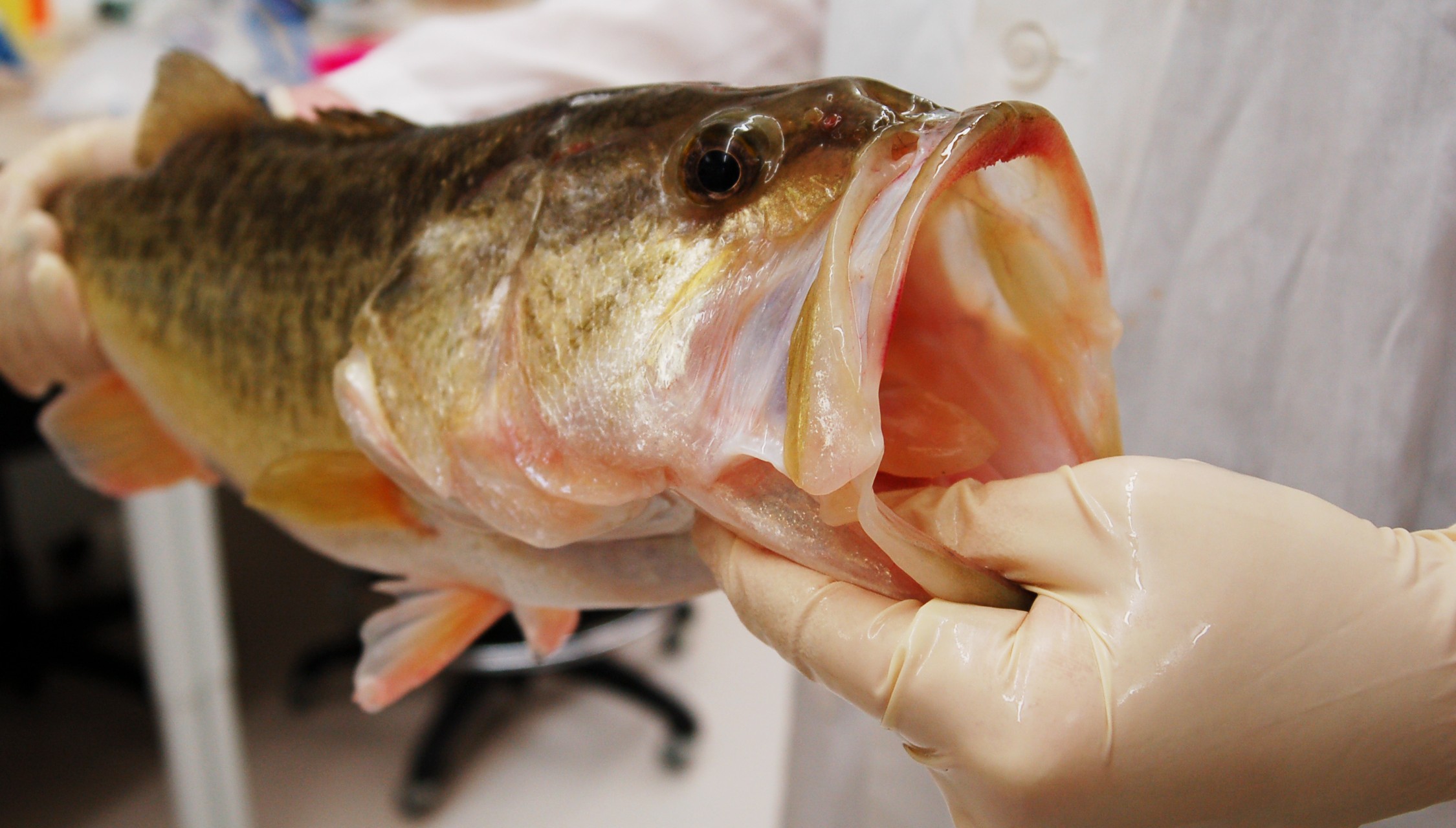 Fisheries faculty member and researcher Eric Peatman is studying the DNA of Alabama’s largemouth bass population in an effort to understand the role genetics play in producing trophy-sized fish.

If you’ve never daydreamed of hooking a trophy bass or experienced the thrill of reeling in a “monster,” then you probably don’t know that the Super Bowl of bass fishing, the Bassmaster Classic, happens later this month. Chances are, you’re also unaware of the economic importance of recreational fishing in Alabama. Adding an estimated $1 billion to the state’s economy annually, big fish are a big deal here.

According to Auburn fisheries research, in 2012, recreational fishing at Lake Guntersville alone generated $45.2 million in expenditures, resulting in tax revenues of $610,000 for the state and $425,000 for local governments. A large portion of those dollars—whether spent on hotel stays, fishing licenses or fuel for boats and trucks—is paid out in pursuit of just one fish: the largemouth bass. That’s one reason the Alabama Department of Conservation and Natural Resources goes to great lengths to ensure that the state’s waters are teeming with big bass, stocking popular sport fishing spots with millions of young fish each year.

And it also explains why the state would like to know exactly what it takes to make a trophy bass—specifically, which strains of largemouth grow bigger, faster, in Alabama’s rivers and lakes. Enter Eric Peatman, faculty member and researcher in the School of Fisheries, Aquaculture and Aquatic Sciences.

In his lab at Auburn’s Center for Advanced Science, Innovation and Commerce, Peatman is sequencing the genome of the largemouth bass in hopes of determining whether tournament-winning fish in Alabama are Florida bass introduced to rivers and reservoirs by ADCNR, native northern bass, or a combination of the two. Using the same cutting-edge technology that is transforming human medicine, Peatman and his team have uncovered genetic clues in the form of single nucleotide polymorphisms, or SNPs, that have allowed them to trace the ancestry of the different largemouth bass strains inhabiting Alabama’s waters and to understand the genetic makeup of the prized fish.

“These SNPs allow us to analyze and classify existing bass diversity in the state, assess the impact of ADCNR’s stocking program and identify the genetic profile of trophy-sized fish,” Peatman says. “If we understand the genetic profile of fish with trophy potential, we can better tailor the state’s stocking program to ensure the highest quality bass fisheries for our anglers for years to come.”

Spencer Gowan, a graduate student working with Peatman on the largemouth bass project, demonstrates how DNA is collected from the fish for sampling.

So far, the team has sampled about 2,500 bass from more than 25 Alabama rivers and reservoirs. The nonlethal sampling technique involves taking a small clipping of tissue from a fin, something they did with hundreds of fish caught during last year’s Bassmaster Classic on Lake Guntersville. Because it is one of the world’s top bass-fishing lakes and, thus, an economic engine for northeast Alabama, Guntersville has been a focus of Peatman’s research, and he and his team have been able to develop a genetic profile of what they call the Guntersville bass.

According to Peatman, the typical bass caught in Guntersville is a hybrid fish resulting from interbreeding between stocked Florida bass and native northern largemouth bass. This insight is as good as gold to ADCNR, the funder of the study, which will use Peatman’s findings to inform its stocking program.

“Dr. Peatman’s research has provided us with a much greater insight into the genetic heritage of our native largemouth bass populations in Alabama,” says Nick Nichols, assistant chief of fisheries for ADCNR’s Wildlife and Freshwater Fisheries Division. “We expect that his team’s work will soon provide us with the necessary information to better identify stocks of largemouth with desirable traits that can be used to better enhance and manage our state’s fishery resources.”

VIDEO: Now that you’ve got bass on the brain, let Pat Snellings and Tim Ward, two members of the Auburn University Bass Fishing Team and College of Agriculture students, give you their best advice for catching a trophy fish while staying safe on the water.