Alabama Oyster Social is a party with a purpose 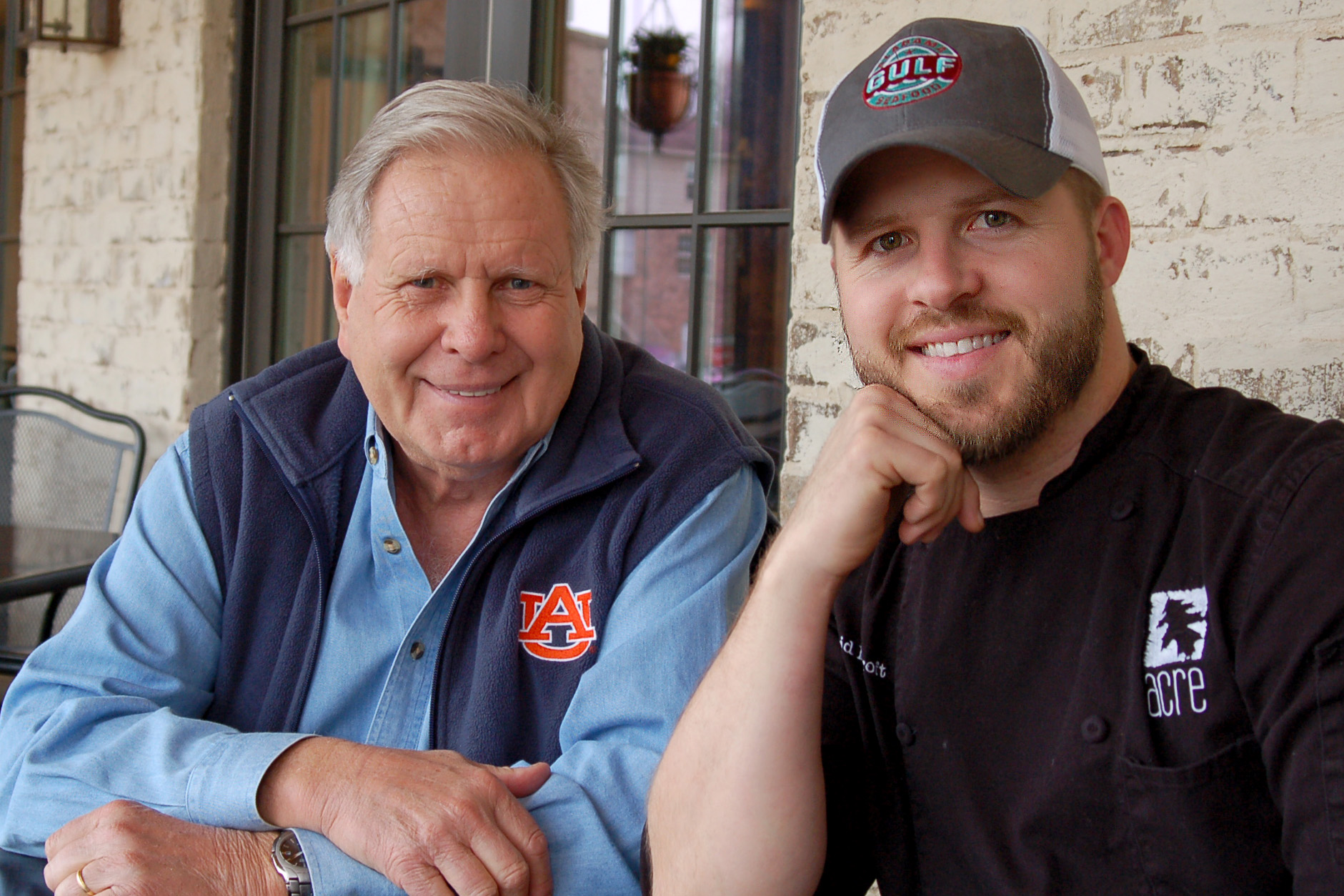 A 35-year connection between John Jensen, left, and David Bancroft, right, helped bring about the idea for the Alabama Oyster Social, which will benefit Auburn fisheries oyster research.

Chef David Bancroft is tireless in his efforts to find the best ingredients for the fresh, new interpretations of Southern classics he cooks up in his kitchen at Acre restaurant in Auburn. He’s so committed to sourcing those ingredients as close to his kitchen as possible that he grows as many as he can on the one-acre parcel the restaurant occupies on Glenn Avenue. However, in a complex, modern food system, it can sometimes be difficult to access, say, Alabama seafood, just in time to introduce a special dish to his restaurant’s hip, ever-evolving menu.

This is a lesson he learned the hard way last winter when he decided to throw a party in honor of the lowly oyster. Hoping to take advantage of the peak in oyster flavor and texture that occurs when Alabama’s coastal waters cool down in winter, and knowing that a handful of folks on the coast were farming the salty bivalves, Bancroft attempted to procure thousands of them for his event. To his disappointment, the system wasn’t in place to bring in the number he needed just in time for his first oyster social, and he resorted to sourcing the main ingredient from Virginia’s Chesapeake Bay.

Regardless of their provenance, the oysters were a hit, and the social was such a success that the chef decided to host a reprise—the Alabama Oyster Social—that is set for Friday, Jan. 30, at Acre. Obviously, Alabama-farmed oysters will be the stars of the show.

Thanks to a long-time family connection, Bancroft knew just where to find the help he needed to get a ton of oysters from the coast to his kitchen for this year’s event: the Auburn University School of Fisheries, Aquaculture and Aquatic Science. Bancroft’s family and SFAAS Director John Jensen go way back, 35 years to be exact, to the beginning of Jensen’s work with Paul Kennedy, Bancroft’s maternal grandfather and a catfish and tilapia farmer in Hartford, Alabama. Having witnessed SFAAS researchers’ work on his granddad’s farm, Bancroft knew the value of their efforts to establish new markets for sustainably grown products and to streamline processes for the Alabamians who produce them. He also knew about the researchers’ efforts to get oyster farming off the ground—literally and figuratively—in communities long dependent on the state’s wild fisheries. That is why Bancroft will donate a portion of the proceeds from the event to SFAAS to support oyster research.

Alabama farmed oysters like these will take center stage at the Jan. 30 event in Auburn.

One of the leaders in Auburn’s oyster farming efforts is Bill Walton, a fisheries and aquaculture expert and former part-time Cape Cod oyster farmer who relocated to the Gulf Coast five years ago. As leader of the Auburn University Shellfish Laboratory on Dauphin Island and a specialist with the Alabama Cooperative Extension System, Walton hopes to one day see “branded” oysters coming from each of the farms he’s working with—each known for a unique taste, texture, appearance or some other characteristic, and each sought after by chefs like Bancroft and those who will join him in serving up the shellfish at the social. The social will feature a variety of Alabama premium oysters, including Isle Dauphines, Mon Louis’, Murder Points, Point aux Pins and Southern Pearls, and a number of the oyster farmers and their families will be a part of the festivities.

So, what exactly is an oyster social?

“It’s not a sit-down meal,” says Bancroft, who has recruited some of the South’s most acclaimed young chefs to develop a menu that will not disappoint. “It’s a party for a purpose.”

In addition to oysters, the event will feature tastings from Southern beverage makers Cathead Vodka, Back Forty Beer, Sazerac and others. While enjoying food, drink and live country music from Mobile natives BB Palmer and Kudzu, guests may not realize exactly what the purpose of the party is. But Bancroft stresses that the whole idea is to highlight the quality of Alabama-farmed oysters and the value of related research Auburn fisheries is doing.

“This event is a collaborative effort to support those who make their living from the Gulf and the Auburn researchers who help them succeed,” Bancroft says. “These colleagues and I in the food and beverage industry understand the ecological and economic value of sustainable fisheries, and in particular, we want to highlight the quality of sustainably farmed oysters being produced on Alabama’s coast.”

Tickets to the Jan. 30 Alabama Oyster Social are $55 each and can be purchased online at www.alabamaoystersocial.com. The social will kick off at 6 p.m. Acre is located at 210 E. Glenn Ave. in downtown Auburn.