Outstanding in their field 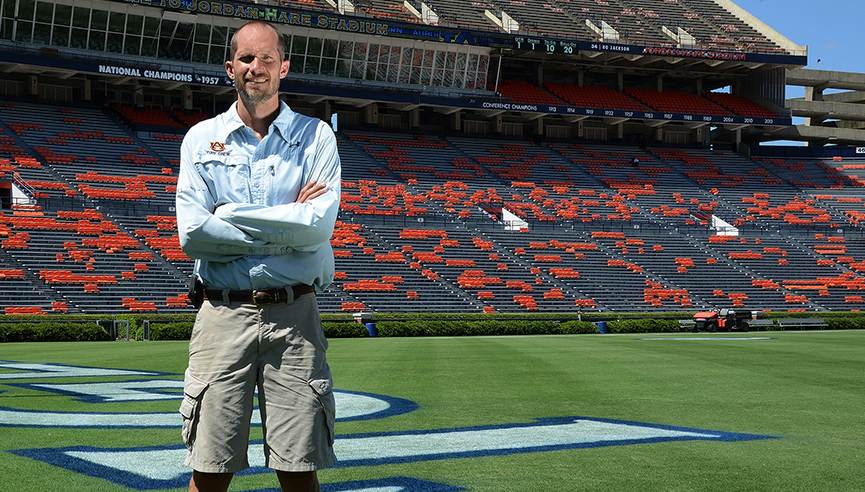 College of Agriculture grad Eric Kleypas is the man in charge of keeping all of Auburn University’s athletes running on top-notch turf.

This spring when the Auburn athletics grounds crew painted the route of Chris Davis’ famous Iron Bowl 2013 run on Pat Dye Field, it caused quite a stir among sports fans and media. Retweeted more than 1,100 times, the photo of the route may very well qualify for “viral” status.

But it’s not all fun and games for the folks who keep Auburn’s athletic teams running on solid ground. In fact, there’s quite a bit of science behind what they do, and the man who leads them has as firm a foundation as anyone in college athletics.

Eric Kleypas earned his bachelor’s in turfgrass management and master’s in agricultural science, both from  the College of Agriculture’s Department of Crop, Soil and Environmental Sciences, and began working on the turf crew at Jordan-Hare Stadium as an undergrad, back in 1998. Today, he’s director of athletic turf and grounds—the man in charge of all things turf-related for the university’s athletic facilities.

While that’s a sweet gig, it comes with its fair share of pressure. That’s why Kleypas remains closely connected to the department that got him where he is today, relying on his former professors for advice and employing current turfgrass management students to help keep the fields flawless.

“It helps to have good professors here on campus so that, any time I have a problem, they’re right down the road to help me solve it,” Kleypas says, speaking specifically of three individuals who are key to the turfgrass management program. “Depending on what the question is, I’ll work with Dr. [Beth] Guertal, Dr. [David] Han or Dr. [Scott] McElroy, just to help me make sure I’m not slipping up anywhere.”

Slipping up might be as costly for Kleypas as it is for the athletes whose cleats tear down the fields he meticulously maintains. Fortunately, he is well prepared to perform the duties of his profession, thanks to a degree program that has successfully merged basic science with real-world applications since 1927.

“There are a lot of good turfgrass programs out there, but academically, the Auburn program is one of the strongest you’ll find,” says Guertal, a professor specializing in turfgrass and nutrient management. “We require more chemistry and math, and that sets our students up for careers in a multitude of directions, from sales to Extension to science-oriented careers as well.”

The fact that it is the third oldest turfgrass management program in the U.S. doesn’t mean it’s old-fashioned. This year, the department launched an entirely online master’s degree, the first of its kind among universities in warm-season regions. The online program was designed to serve those who are working full time and cannot make it to campus for classes. Guertal points out that the majority of Auburn turfgrass graduates fall into that category because the program’s job placement rates are so high.

This is not just a testimony to the curriculum, but also to those who lead it.

With 23 students currently, the program is relatively small, and that creates a family-like feeling between students and faculty. Aside from the chance to help care for the hallowed ground of Jordan-Hare, the close-knit nature of the turfgrass program results in some other enviable opportunities for undergrads.

“We have 10 to 12 students working with us on the field crew at any given time, and recently, our students have interned with the Miami Dolphins, Houston Astros, Boston Red Sox, Green Bay Packers, Texas Rangers, Washington Nationals and at Augusta National [Golf Club], just to name a few,” says Kleypas. “Selfishly, I like to see those students come back and tell me the tricks of the trade they’ve learned from the pros.”

VIDEO: Get a behind-the-scenes look at what it takes to prep Pat Dye Field for a home game.