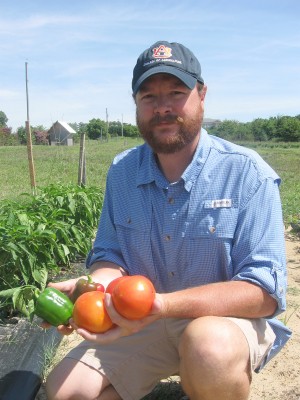 As of  Aug. 1, Auburn University Ph.D. student Zack Ogles had picked a ton of produce—closer to 2,200 pounds, actually—from the eight-row garden he has on the Auburn campus. There’s no telling how many tomato sandwiches, squash casseroles and skillets full of fried okra that ton of produce yielded, but it’s a safe bet that the hundreds of low-income Lee Countians who enjoyed the fruits of Ogles’ labor relished every mouthwatering bite.

All those recipients are patrons of the Food Bank of East Alabama, which is the sole beneficiary of every ounce of produce that Ogles grows and harvests from the garden.

The seed for such a garden was planted back in 2005, when an agronomy and soils Ph.D. student studying best management practices for organic vegetable production donated the 1,500-plus pounds of fresh collard greens he harvested from his research plot to the food bank. The following year Auburn turfgrass management professor Beth Guertal took the lead and, on a small section of the Department of Crop, Soil and Environmental Sciences’ agronomy farm off Woodfield Drive, established the project.

“We created the food bank garden to help out the community,” Guertal says. “It’s a way to provide the local food bank with healthy and fresh vegetables to give to its customers.”

Though the garden kept the food bank supplied with fresh summer and fall produce in its early years, a shortage of student volunteers from 2010 to 2013 put production on hold. Guertal was thrilled in early spring when Ogles committed to reviving the food bank garden.

Funded by grants and donations Guertal has received, Ogles prepped the land, installed an irrigation system and planted 500 tomato plants, as well as cucumber, bell pepper, green bean, squash, okra and cantaloupe seeds. He maintained the garden throughout the summer, and, though a few volunteers occasionally showed up, he harvested the vast majority of the produce himself. He also loaded it and trucked it across town to the Food Bank of East Alabama.

“I especially like growing vegetables,” says Ogles, who has his own small vegetable farm in his hometown of LaGrange, Ga. “It’s one of my favorite things to do, and it’s great to be able to do something you really enjoy, all the while helping people who need it.”

He’ll follow the summer produce with cauliflower, broccoli, collards and other fall vegetables—all destined for the food bank, of course.

Ogles earned his bachelor’s in agronomy and soils from Auburn in 2001 and spent the next 11 years working, first, as an assistant superintendent at golf courses in Alabama and South Carolina and then as superintendent of a course in LaGrange. In 2012, he returned to Auburn for graduate school. He was awarded his master’s in horticulture in May 2014 and immediately entered the Ph.D. program in the Department of Crop, Soil and Environmental Sciences.

Ogles says anyone on the Auburn campus is more than welcome to join him in working the 14,375-square-foot food bank garden.

“Volunteers would be a great help in making sure we get as much produce as we can to the food bank,” Ogles said.

To learn more about the garden, contact Guertal at guertea@auburn.edu.