Neither wheelchair nor brittle bones slow this lady down 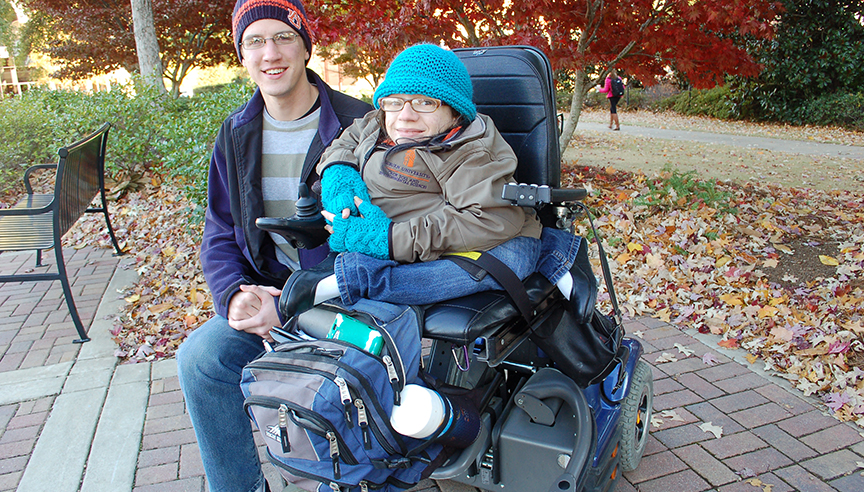 Chris and Danielle Tadych, both students in the College of Agriculture

OK, maybe she didn’t coin that phrase, but if anyone has ever epitomized it, it’s Danielle Tadych (TAD-itch).

“There’ve been times in my life when I really wanted to do something and I’d say, ‘I can’t,’ but I’d always find out that I could do anything I wanted to, if I just tried,” Danielle says.

So, just because no wheelchair-bound student had ever, in its 54-year history, competed in the annual collegiate Southeast Regional Soil-Judging Contest, that didn’t deter Danielle. When Auburn’s coaches and soil judgers traveled to Clemson University back in October for the 2014 event, the Opelika native was among them.

Though the terrain in the fields at Clemson was fairly uneven, Danielle and her fully-loaded electric wheelchair went the distance, and she wound up finishing ninth among the 76 students from 13 universities who competed in the event. Her score helped propel Auburn’s soil-judging crew to a first-place finish in the contest and a ticket to the national contest at the University of Arkansas at Monticello in the spring.

Kristen Pegues, a senior in agronomy and soils and member of the soil-judging team, says Danielle was and is an integral part of the team.

“Having Danielle on the team meant we moved a little slower than the other teams, but she helped keep all of us positive the week we were at Clemson,” Pegues says. “With Danielle, you always see the joy of life on her face.”

That upbeat attitude is Danielle’s strongest characteristic, wheelchair or no. She has osteogenesis imperfecta, or brittle bone disease, a genetic disorder in which the body lacks bone-strengthening collagen and bones subsequently break, sometimes for no apparent reason. She was diagnosed shortly after she entered the world, screaming with the pain of two broken arms.

In her 20 years, she has never stood or walked unaided; she’s broken every bone in her body—except for those in her fingers, toes and face—at least once; she’s endured nine surgeries; and she’ll spend the rest of her life in a wheelchair. But the thing is, the 3-foot-tall, 45-pound Danielle is fine with every bit of that.

“This is how I was born, and it’s the only life I know, which is good, really, because I don’t have anything to compare it to,” she says. “I’m totally comfortable with my disability. I won’t let it get in the way of things I want to do in life. This, to me, is ‘normal.’”

Her brother Chris, a senior in animal sciences/pre-vet who’s a year Danielle’s senior and who has been her near-constant companion since birth, concurs. They were home-schooled together and spent their first two years of college at Southern Union State Community College in Opelika, taking the same core courses on the same schedule. Since transferring to Auburn together in fall 2013 with different majors and different course requirements, “it’s been a slow transition, but we’re getting there,” Chris says. They do still coordinate their class times and on-campus work schedules because Chris does the driving to and from Opelika.

“Our lives are perfectly normal, to us,” Chris says. “I’ve been pushing Danielle’s wheelchair and helping carry her around since I was 5 or 6. When she got this electric wheelchair that she can drive in 2010 I almost felt like a part of my body was missing or something, not having a wheelchair to push.”

Danielle says her faith and her parents, Hope and Len, get full credit for her ever-positive attitude.

“My parents never sheltered me or gave me any special treatment because of my disability,” she says. “Their approach was, ‘OK, we know Danielle’s going to break, that’s inevitable, but we won’t let ourselves overprotect her.’ They wanted me to be successful in life, and I’m so thankful for that.”

When she receives her B.S. degree in environmental science in 2016, she intends to get a master’s and, most likely, a Ph.D.

“It could be at Auburn, but I’d love to go to grad school somewhere out West, maybe New Mexico,” she says. And, she will find a way. By that time, though, she hopes, first, to have learned to drive and, second, to have her own set of wheels. She’s getting closer to the driving part of the dream, thanks to lessons through Alabama’s Vocational Rehabilitation Services, but she’s about $40,000 away from a wheelchair van.

In recent months, through the online fundraising website GiveForward, her family has established a site where friends and supporters can contribute to the van fund.