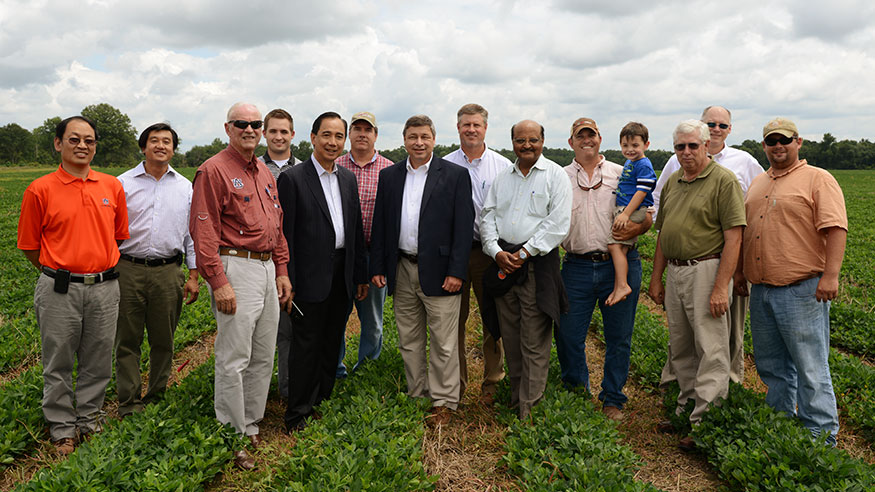 AUBURN, Ala. —William Dar, director general of the International Crop Research Institute for the Semi-Arid Tropics, or ICRISAT, and colleague Laxmipathi Gowda, the institute’s deputy director general for research, were in Auburn recently as guests of the College of Agriculture. The two-and-a-half-day visit included presentations and discussions about both institutions’ research, knowledge and capabilities; tours of College of Agriculture facilities; a tour of a local farm; and conversations with policymakers and stakeholders.

Researchers with both the institute and the college are working to develop peanut varieties with improved drought tolerance and pest resistance, and the visit helped solidify the organizations’ cultivar development partnership.

“Partnerships like ours with ICRISAT are becoming very important in order for us to leverage our investments in research,” said William Batchelor, dean of the College of Agriculture. “Our peanut research not only helps producers here in the Southeast but can also help some of the world’s poorest farmers in underdeveloped regions like those served by ICRISAT.

“This partnership will allow our teams to share the knowledge necessary to advance the science of food production and, ultimately, to feed a rapidly growing world population,” Batchelor said.

The College of Agriculture, located in the world’s most productive peanut-growing region and employing internationally recognized researchers as part of the AU Peanut Team, is well-suited to offer assistance with peanut research and development. Likewise, ICRISAT possesses assets that may be useful to the Auburn team in improving peanut varieties commonly grown in Alabama, including 25,000 peanut accessions stored in the institute’s gene bank.

“Auburn University can have a big impact on bringing agricultural science from America to other parts of the world where it is greatly needed,” said Dar, noting that, by partnering with ICRISAT, Auburn’s College of Agriculture joins a number of other American colleges of agriculture currently working with the organization. “Purdue [University], the University of Georgia and [University of] Florida are also working with us, just to name a few.”

The international research institute is a nonprofit organization that conducts agricultural research for deployment in the semi-arid and dryland tropics of Asia and sub-Saharan Africa. It is headquartered in India but maintains two regional hubs and six national offices in Africa. Its mission is to “reduce poverty, hunger, malnutrition and environmental degradation in the dryland tropics” through partnerships with agricultural research institutions around the world.