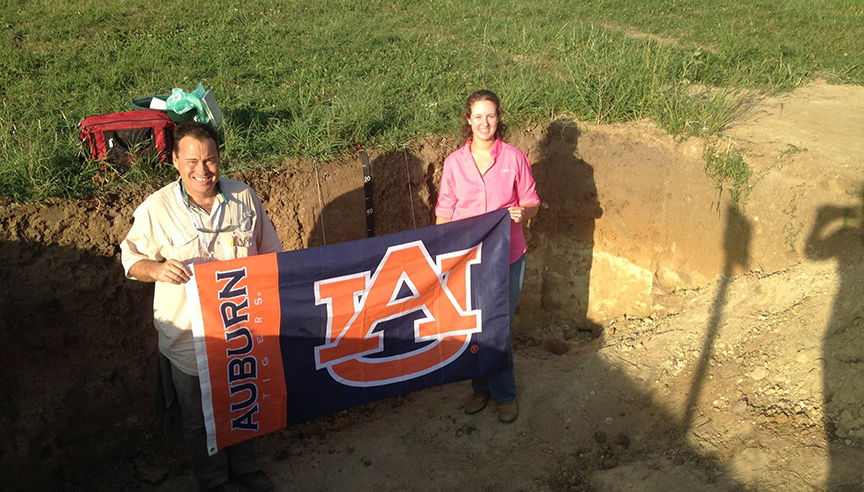 Joey Shaw, professor in the Department of Crop, Soil and Environmental Sciences at Auburn, and spring 2015 agronomy and soils graduate Kristen Pegues show their Auburn spirit even while standing in a soil pit 5,300 miles from home. In the 2015 International Soil Judging Contest Sept. 5 in Gödöllő, Hungary, Shaw led Team USA to a world championship, and Pegues finished with the highest individual score to win the title of the world’s No. 1 soil judger.

Auburn University soil and environmental scientist Joey Shaw coached Team USA to a world championship Sept. 5 at the second annual International Field Course and Soil Judging Contest in Gödöllő, Hungary, and team member and spring 2015 agronomy and soils graduate Kristen Pegues scored higher than any other individual in the competition, making her the reigning No. 1 soil judger in the world.

Team USA beat out 16 other soil judging teams from around the globe on its way to the 2015 championship. Spain’s team finished second in the competition, and Hungary’s came in third overall. Among the 70-plus individual team members participating in the contest, Pegues finished first, followed by contestants from Spain and Rwanda, but the three other Team USA members—Erin Bush of Kansas State University, Stephen Geib of Delaware Valley University and Adrienne Nothingham of West Virginia University—also had excellent scores, finishing fourth, seventh and eighth, respectively.

“Having all four of our soil judgers place in the top eight in individual scores, combined with a second-place finish in group judging to a team from Africa, is what gave the U.S. the overall championship,” said Shaw, a Department of Crop, Soil and Environmental Sciences professor who’s now in his 17th year of coaching Auburn soil judging teams.

In a collegiate soils competition, contestants must use their knowledge and skills, both individually and with their teams, to correctly identify and describe the soils in assigned, 5-foot-deep pits, evaluate the potential functions of each soil type and then interpret how the soils would perform under different land-use and management practices.

“These are skills these students can carry into the workplace,” Shaw said. “Having soil scientists in society who can describe and classify soils is the foundation for most land management and use, from agriculture to home construction to streets and roads.”

Shaw won the right to coach America’s team in the global showdown after leading Auburn’s 2014-15 Soil Judging Team to the championship in the 2015 National Collegiate Soil Judging Contest at the University of Arkansas–Monticello in April. Auburn’s Pegues had the top individual score in that contest, too, and she and the next three highest scorers—Bush, Geib and Nothingham—were named to Team USA.

Though the international contest itself was Sept. 5, the event began Sept. 1, with teams spending the first four days attending short daily classroom sessions designed to introduce the soil judgers to the Hungarian landscape and soils and then getting practical training in the field. Shaw and Pegues rendezvoused with the three other Team USA members in Budapest on Aug. 29, marking the first time coach and team had met in person.

“We had four days to get to know each other and to get to know the soils of Hungary,” Shaw said. “But I felt really good about how the team would do, because these were the four students who were the top scorers at the national contest. I knew that they’re all excellent soil judgers.”

As an undergraduate at Auburn, Pegues was a member of three consecutive soil judging teams. The Fairhope native and daughter of Gulf Coast Research and Extension Center director Malcomb Pegues entered the University of Georgia in August as an agronomy and soils master’s student, but she represented Auburn on Team USA.

The soil Olympics in Hungary, held as part of the UN-designated International Year of Soils celebrations, was only the second annual international contest. The inaugural soil judging competition last year was held in Jeju, Korea, during the 20th World Congress of Soil Sciences. The 2014 winner? Team USA.

“Not to put any pressure on us or anything,” Shaw said before leaving for Hungary.