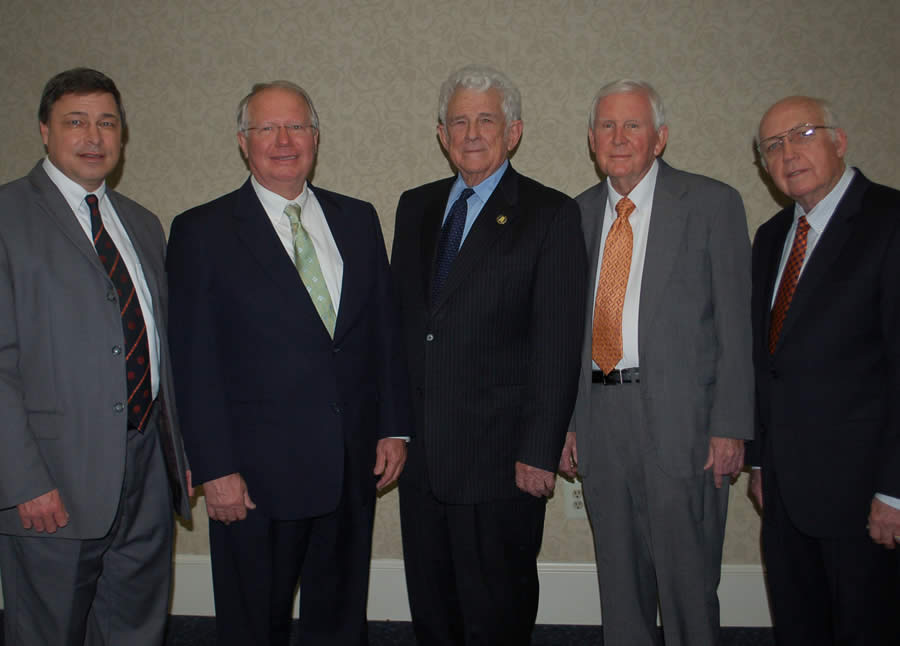 NEWEST MEMBERS Three men who have made lasting contributions to Alabama agriculture were inducted into the Auburn University Agricultural Alumni Association’s Ag Hall of Honor in a ceremony Jan. 31 in Auburn. The inductees were Tommy Paulk of Decatur, second from left; Philip Martin of Enterprise, center; and Robert Brewer of Auburn, second from right. With the honorees are College of Agriculture Dean Bill Batchelor, left, and Bill Gilley, outgoing association president. Paulk, president and CEO of the Alabama Farmers Cooperative, was the inductee from the agribusiness sector; Martin, a Coffee County row-crop and dairy farmer who has held many leadership roles in the agriculture industry in Alabama, was the production-sector honoree; and Brewer, the education/government-sector inductee, was on the faculty of Auburn’s Department of Poultry Science for 32 years. Also during the induction ceremony, the alumni organization presented its 2013 Agricultural Pioneer Awards posthumously to the late Everett Easter of Limestone County, a key figure in the electrification of rural Alabama, and Samuel Hinote of Robertsdale, a trailblazer in the state’s farm-raised catfish industry. The Easter and Hinote families were on hand to accept the awards. The 2013 marked the 30th anniversary of the year Hall of Honor induction marked the 30th annual event.