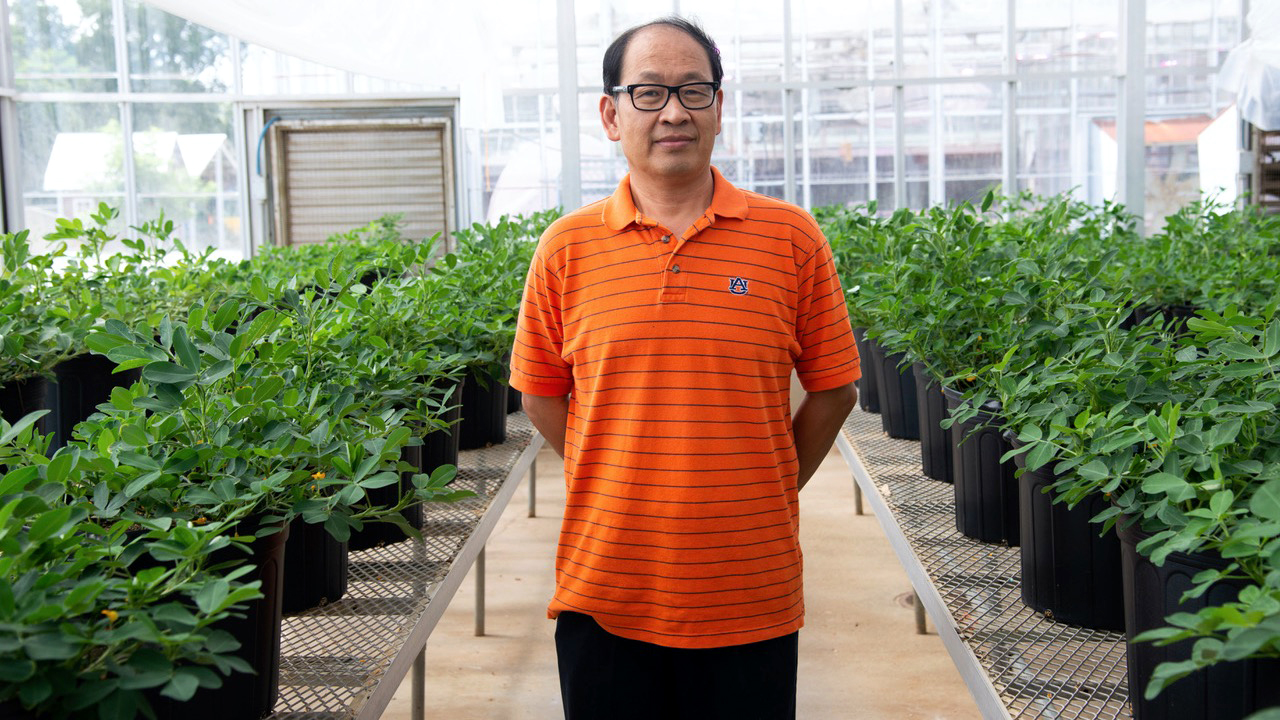 Researchers in Auburn University’s College of Agriculture are using a $490,000 grant to accelerate efforts to breed a drought-tolerant peanut plant, a development that would be a game changer for the industry.

Peanuts continue to be a staple of the Southeast farm economy, but water limitations have a detrimental effect on yields and producer income. In fact, the American Peanut Council has identified drought — along with aflatoxin contamination — as one of the top two challenges facing the $14 billion U.S. peanut industry.

“Irrigation is a major component of water use in the drought-prone Southern United States — a region that is responsible for the bulk of domestic peanut production,” said Charles Chen, a professor of peanut breeding and genetics and head of the College of Agriculture’s peanut breeding program.

Chen also is heading the research team working on the nearly half-million dollar USDA-NIFA grant. Funding for the research also is being provided by the National Peanut Board.

The development of peanut cultivars with improved tolerance to drought should decrease the amount of irrigated cropland and help alleviate some pressure on agricultural water use, Chen said. At present, there is no drought-tolerance rating for peanut varieties grown in the United States.

“The U.S. peanut crop offers an ideal system to study both the genetic basis of drought responses and develop molecular and physiological targets to improve yield in the face of drought,” he said.

“Dryland peanut cropping is common. For example, 65 percent of U.S. and 90 percent of Alabama production is not irrigated, in part because of its tolerance to short-term drought conditions. However, longer-term and mid-season drought reduces yield by more than $50 million annually.”

In situations where producers have the option of providing water through irrigation, the greatest challenge is when to irrigate and how much per application, said John Beasley, head of the Department of Crop, Soil, and Environmental Sciences and a former peanut agronomist.

“Water is our most precious resource, and we must use it efficiently,” Beasley said. “A peanut crop needs approximately 22 to 23 inches of water in a crop year, the majority of which is needed in the eight-week period of 70 to 125 days after planting. For producers without the capacity to irrigate, during that eight-week period, they are at the mercy of Mother Nature to provide 15 to 20 inches of that 23 total inches in that narrow window of a 20-week season.”

The research being conducted by Chen and his team is crucial, he said.

“If Dr. Chen’s research program can identify drought tolerance in peanut genotypes, this will be a game changer for producers who grow peanuts under rain-fed conditions,” Beasley said. “Peanut cultivars that are more water-use efficient will allow for higher yields, better quality and less risk of aflatoxin when there is less rainfall at critical times of the growing season.”

A drought-tolerant peanut variety may or may not be released from this three-year research project, Chen said.

“It might not be sufficient time to breed a new cultivar,” he said. “The goal is to develop the tools needed to speed up the breeding process so we can have a drought-tolerant variety as soon as possible. The tools we build will be beneficial to the entire U.S. peanut community.”

He predicts it may take five to 10 years before a producer can plant a drought-tolerant peanut variety.

Through previous funding from USDA-NIFA, the National Peanut Board and Auburn University, Chen and his research team have sought to build a platform and optimize protocols to test physiological and genetic responses of peanut plants grown under drought stress in the field. These efforts have been very successful, he said.

“We discovered that some genotypes that have yield stability across both irrigated and drought conditions are conferred by a complex set of physiological responses, including improved water-use efficiency and leaf anatomy.”

“This project allowed us to optimize experimental drought conditions under the soil moisture manipulation shelters at the National Peanut Research Laboratory in Dawson, Georgia. Crucially, we have developed strong physiological models for yield under drought conditions, using physiological proxies. For example, drought resistance may be enhanced by improvement in soil water extraction capability or improvement in water use efficiency,” Chen said.

Chen and his team also identified several physiological characteristics that were associated with drought tolerance, including transpiration and photosynthesis rate.

The most recent project has three objectives, Chen said, including documenting the DNA variants that distinguish the most drought-tolerant and susceptible peanut cultivars, dissecting the molecular basis of gene expression and physiological responses to drought, and developing molecular markers for alleles (one of two or more alternative forms of a gene that arise by mutation and are found at the same place on a chromosome) that improve yield under drought conditions.

“Our efforts to computationally screen for candidate genes will embark on genomic selection and other molecular-informed breeding strategies to quickly and effectively breed elite drought tolerant peanut lines,” he said.

In addition to Chen, members of the research team include Department of Crop, Soil and Environmental Sciences faculty members Alvaro Sanz Saez de Jauregui and Yucheng Feng; Phat Dang of the USDA-ARS National Peanut Research Laboratory in Dawson, Georgia; and John Lovell from the Hudson-Alpha Institute for Biotechnology.

“To achieve the goals of our research, we have assembled a team at the forefront of peanut drought physiology, genomics and systems genetics,” Chen said. “Our group recently constructed the first state-of-the-art peanut genome reference, has conducted several years of experimental drought manipulations, and developed the modeling tools that we will employ during the course of this project.”